Soap Summaries: Two reunite in prison, as a Cassadine is revealed 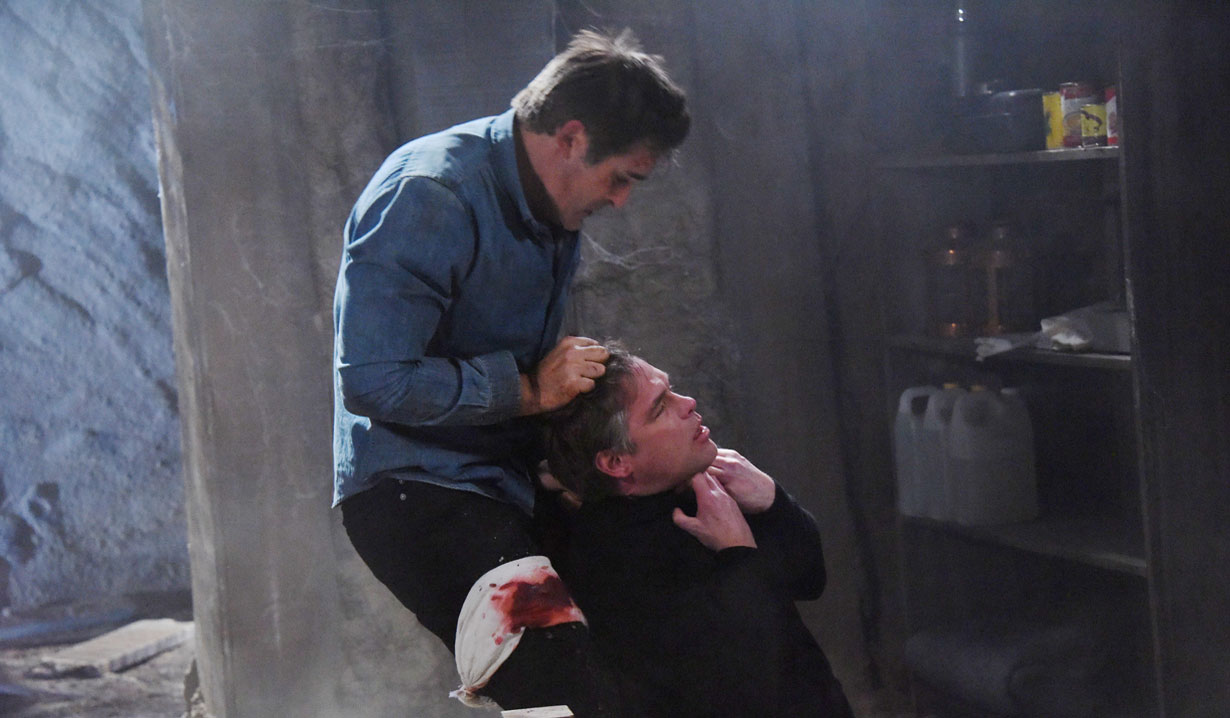 A race to save the woman he loves.

Liam feared for Steffy’s safety on “B&B.” Rafe saved Hope, as Aiden learned of their presumed deaths on “Days.” Theo revealed his true identity then shot Nik and Kevin on “GH,” and Adam went to prison as Chelsea pulled a knife on Victor on “Y&R.”

Soaps.com’s episode highlights and daily soap opera recaps provide readers with a play by play of the drama before a new week in daytime begins!

Cathy Rankin is back, dishing on soap highlights from the past week in our Soaps Roundup.

The Bold and the Beautiful:
Wyatt assured Liam that Quinn wasn’t dangerous, but Liam feared for Steffy’s safety. Over at Forrester, Eric made it appear to Steffy that he wanted Quinn to leave then kissed his lover when they were alone. As everyone boarded the jet for the Spencer Summit, Quinn made plans to attend as well. In the studio, Nicole shook off her insecurities regarding Sasha and convinced Zende to accept Ridge’s initial offer – to shoot Sasha in lingerie. Later, while Zende and Nicole made love, Vivienne assured Julius she was trying her best to reconnect with him as her husband. Elsewhere, Ridge confided in Brooke, who struggled over her issues with Katie and Bill, that Thomas and Caroline were still in love. Both agreed they had to protect their families then Brooke went to Bill and demanded he return Will to Katie. Read the Bold and the Beautiful daily recaps for what led Caroline to longingly stare at a photo of her, Thomas and Douglas.

Days of our Lives:
Blanca became jumpy to learn a man from Mexico had been looking for her and confessed to Adriana he could never know her whereabouts. Elsewhere, as Andre and Aiden got into a fistfight over Andre’s report that Rafe and Hope were dead, Rafe saved Hope from the rumble. As news of the explosion spread, Rafe had nightmares of losing Hope, killing Aiden and struggled to escape the confines of the tunnel beneath Stefano’s old house. Rafe made his way to the other side of the secret door in the DiMera mansion, leading Chad to help rescue Hope. Brady and Theresa tracked Summer in Vegas. After she denied kidnapping Tate and accused Victor, Summer confessed Clarke’s accidental death and the mysterious kidnapping request. Later, Summer was questioned by Roman upon their return to Salem, where two leads surfaced. Read our Days of our Lives daily recaps to find out what Deimos asked of Nicole after throwing Kate out of the mansion.

General Hospital:
Alexis took a pregnancy test, which came back negative. Over at the Metro Court, Sonny made a deal with Finn in order for him to obtain pharmaceuticals outside of the US, as Naomi learned the drugs Rachel and Tracy were looking for were most likely for someone addicted to a drug similar to heroin. Upon hearing Heather Webber’s name, Naomi had a panic attack and landed in the hospital, where her anxiety reached new heights after Liz spoke of her father Jeff. As Naomi urged Rachel to be nicer to Liz, across town, Sabrina introduced Michael to Carlos’ twin, Joe. Theo separated Jason and Sam from the others on Cassadine Island before revealing himself as Nik’s uncle, Valentin. After he forced Nik to sign over everything he owned, Valentin planned to shoot Ava and Laura but shot Nik and Kevin instead. Read our General Hospital daily recaps to learn which couples gave in to passion, including Kristina and Parker – who Sonny caught kissing.

The Young and the Restless:
Adam was sentenced to three years in prison, leaving Chelsea desperate to locate the missing diary pages, which Chloe hid in a drawer. At the hospital, Victor assured Nikki he didn’t know where the pages where. Chelsea believed otherwise and later held Victor at knifepoint but was forced to leave without answers. Victor was transferred back to prison and promised Adam he’d get him released. Phyllis and Billy continued their affair and it wasn’t long before Jack caught her in a lie. When Jack confronted Phyllis, she managed to ease his suspicions then went against his warnings and burst in on Victor’s court appeal. Victoria was irked by Summer’s attitude at Newman until Summer admitted she was working with her sister against Luca – behind his back. There was a little Brash & Sassy drama as well, which led to a fistfight between Billy and Cane. Read The Young and the Restless daily recaps for Summer’s reaction to Luca’s shocking admission.