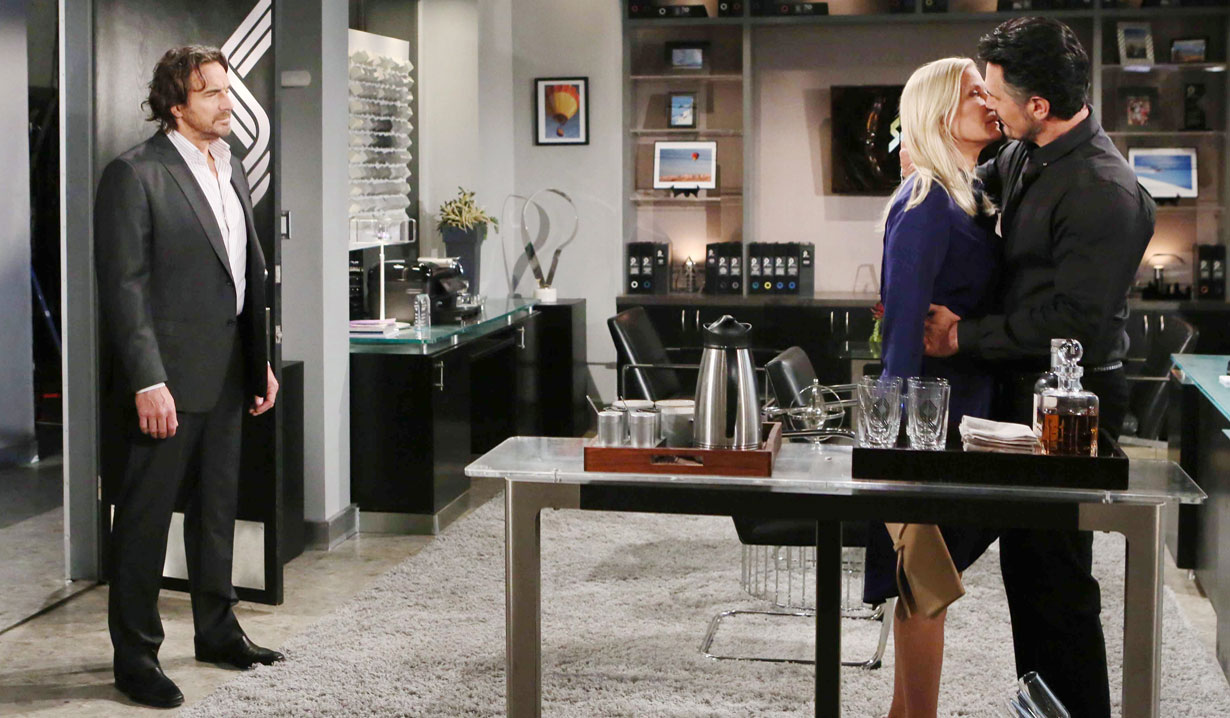 Ridge caught Bill and Brooke kissing, as Quinn bedded a Forrester man on “B&B.” Nicole came face to face with Deimos on “Days.” Julian was urged to kill Alexis and later learned she was pregnant on “GH,” and Nikki was kidnapped after Victor was shot on “Y&R.”

Get a rundown of all the highs and lows and everything that happened in-between last week in daytime through Soaps.com’s episode highlights and daily soap opera recaps.

The Bold and the Beautiful:
Ridge allowed Thomas time with Caroline and the baby and secretly listened as Thomas asked Caroline to be a family with him but left before she expressed her commitment to Ridge. Elsewhere, though Bill assured Katie he was committed to their marriage, Brooke continued to feel guilty and said goodbye to Bill. She then confided in Ridge, who urged her to let Bill go, and they reconnected over their personal troubles. Later, Ridge caught Bill and Brooke kissing – and Brooke once again ended things with her sister’s husband. Quinn arrived at the beach house, where Steffy, the new face of Spencer Publications, warned her away from her and her family. Read the Bold and the Beautiful daily recaps to hear how Quinn gushed over her new lover, Eric, as Katie and Liam made a pact – prior to Liam spying Bill and Brooke kissing, yet again.

Days of our Lives:
Summer was upset to learn Brady and Theresa planned to marry in August. After Clark’s sister appeared and questioned Summer, who claimed not to have seen him in years, Janet hired John to investigate her brother’s disappearance. John went to Brady about the investigation and Brady realized he’d been conned out of 50K. He confronted Summer then broke the news to Maggie, who was devastated. While Aiden and Hope took things slow at Green Mountain Lodge, Blanca preoccupied Rafe with some salsa dancing – until he later uncovered a connection between Aiden and Andre. Over at the mansion, Andre accused Kate of trying to kill Deimos, as Nicole arrived at Chloe’s to find Deimos alive. He professed his love, promised to return to Salem and asked her to stand by his side. Andre spotted Nicole and Deimos upon their return and went to Kate with the news, offering to make Deimos disappear – for a price. Read our Days of our Lives daily recaps to find out where the search for Abby led Chad and JJ, who received proof that she’d started the fire at Shady Hills.

General Hospital:
Jason stayed in London, as Sam headed home, to continue the search for Nik. He located one of Ava’s earrings and shot a man who appeared armed with a gun. Meanwhile, Nik and Ava boarded a jet to Greece. Back in Port Charles, Obrecht caused a ruckus over Finn treating Sabrina’s baby, leading Michael to lock her in a closet. Though everyone learned the baby had botulism, and would be fine, Valerie was forced to arrest Finn. As a very sick Finn passed out in a jail cell, Liz caught Rachel, disguised in scrubs, retrieving a package for Finn at the hospital. Carlos’ ghost taunted Julian at home and urged him to kill Alexis. He contemplated drowning Alexis before Sonny confronted him and put a plan into motion by revealing Alexis was pregnant. Alexis agreed to take a pregnancy test for Julian, which came back positive. When Julian still wouldn’t confess to Carlos’ murder, Anna suggested Alexis wear a wire. Read our General Hospital daily recaps for Liz’s reaction to a horrific scene and learn why Franco paid Heather a visit.

The Young and the Restless:
Phyllis forgot Jack’s upcoming birthday, as Lily caught Hilary making plans for an intimate celebration at the club. Lily warned Ashley, who pushed Phyllis into sharing a romantic getaway with Jack at the cabin. Once there, Phyllis pulled out all the stops in order not to sleep with Jack. The next day, as Jack headed back for Adam’s trial, Phyllis stayed at the cabin, where Billy appeared and made love to her. Visions of Sage continued to taunt Sharon at home, which led to her knocking Mariah out with a bookend. Everyone gathered for Adam’s trial, where Victor took the stand, rebuffed Ian’s claims that he set Adam up, professed his love for his son and basically called Meredith a liar. In the end, Ian managed to wrangle a gun from a cop, shot Victor and kidnapped Nikki! Read The Young and the Restless daily recaps to find out what transpired at the hospital with Neville, who found a treatment to Hilary’s relapse.

Most Memorable Fourth of July...