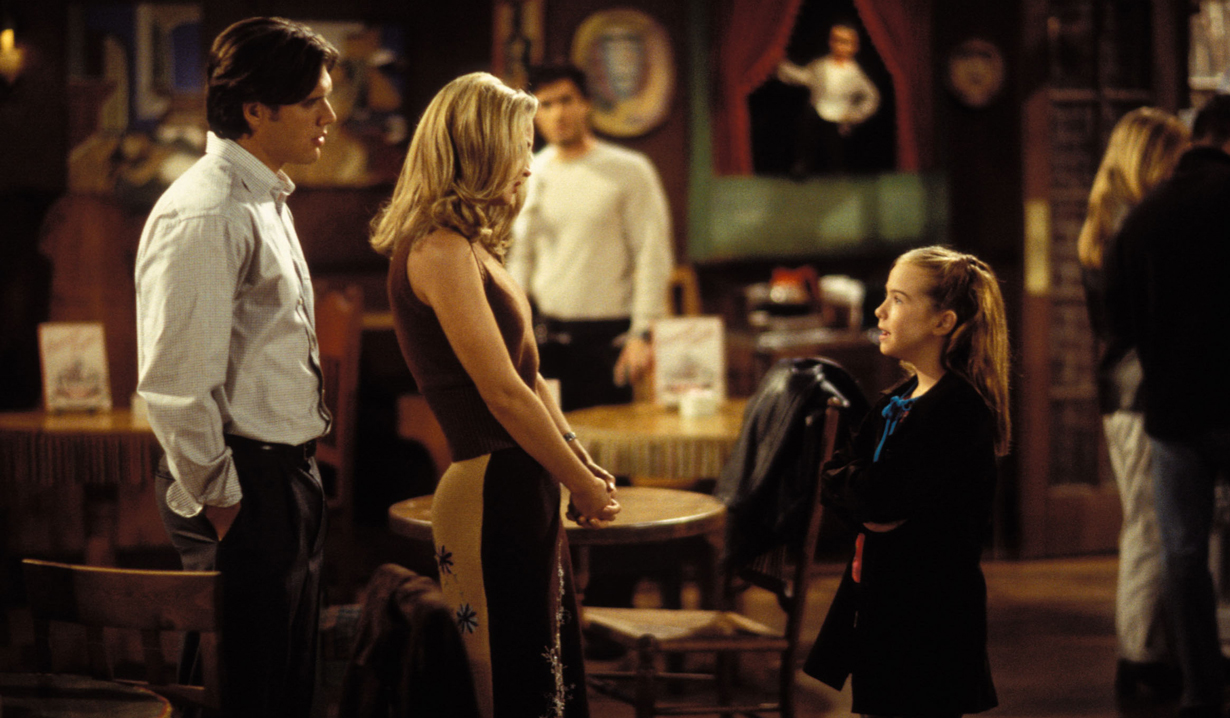 Good versus evil, we’ve seen an abundance of them all.

The twin has been a popular soap opera plot device and character for decades. Twins on daytime come in many forms. There are the brother and sister fraternal twins like Rex and Cassie Brady on Days of our Lives, whose out of this world-conception was truly unbelievable. Identical twins tend to be popular soap opera trope with one impersonating the other. Sometimes they are polar opposites, personifying good versus evil, such as with the iconic characters Stuart and Adam Chandler on All My Children, along with Stuart’s wife Cindy Parker Chandler and her twin Karen Parker. Then there are those jealous of their twin, as with Marley Love and Vicky Hudson on Another World, who were often fighting over a man. You also have the doppelgangers who impersonated another, as with Natalie Marlowe and Janet “from another planet” Green on All My Children, and Hattie Adams and Marlena Evans on Days of our Lives. Sometimes these doppelgangers are natural ones, and other times they have a bit of science and surgery to help them achieve their looks. And naturally, there are the long-lost twins who come out of the woodwork after being separated at birth, such as with Drew Cain and Jason Morgan on General Hospital. Because there are so many we could never include them all, but browse through our gallery of some of our favorite twins from All My Children, Bold & Beautiful, Days of our Lives, General Hospital, One Life to Live, and Young & Restless. Also be sure to comment and let us know which soap twins are your favorite!

<p>On <em>Guiding Light</em>, Reva Shayne (Kim Zimmer) discovered she had a clone named Dolly in one of daytime’s most outlandish plots. Dolly was created by Reva’s husband Josh (Robert Newman), who thought she had died, and used aging serum to create a Reva look-a-like. Dolly eventually grew too old and died, but not before imprisoning and taking over the real Reva’s life after she returned from the dead.</p>

<p>Katherine Chancellor (Jeanne Cooper) was stunned to come face to face with her double, Marge Cotrok, on <em>Young & Restless</em>. Learn more about these two in our <a href="https://soaps.sheknows.com/the-young-and-the-restless/news/2600/yr-check-out-katherines-double-marge-on-soaps/" target="_blank">3 major things about Marge Cotrok</a> article. </p>

<p><em>Days of our Lives’</em> Dr. Marlena Evans (Deidre Hall) has had two twins on the NBC soap opera. When her character was originally killed by The Salem Strangler, fans were outraged and the show brought her back, with the killer mistaking Marlena’s long lost twin Samantha (Andrea Hall) for Marlena. The role was played by Hall’s real-life twin. Andrea Hall returned years later as Hattie Adams, a waitress turned con-woman that Stefano DiMera (Joseph Mascolo) found and transformed with surgery into Marlena’s double. Eventually Deidre Hall took over the role-playing double duty.</p>

<p>It’s hard not to think of the iconic good twin/bad twin portrayal of the Chandler twins by David Canary for decades on <em>All My Children. </em>You couldn’t help but love the simple artist Stuart and his pure-hearted sweetness that was such a stark contrast to his conniving businessman brother. Over the years Stuart became the ideal sounding board for anyone in Pine Valley looking for a moral compass, especially calculating Adam whose soft spot for his brother was unmatched. It hurt fans deeply when it was revealed Adam was the one who killed Stuart in a haze, and his later return from the dead did little to ease that hurt.</p>

<p><em>One Life to Live</em> was so loaded with twins it became hard to make the plot point very original until these two came along. After Todd (Roger Howarth) was thought to be dead, a man named Walker Laurence (Trevor St. John) came to Llanview claiming to be Todd, though they looked nothing alike. Over time it eventually became clear he really was Todd, until Howarth’s Todd came back to town. Each claiming to be the true Todd, a test proved the men had matching DNA but it wasn’t until 2011 when the full truth came out they were not the same person, but twins. To say these two never bonded is an understatement.</p>

<p>Though not twins, Kristen DiMera (Stacy Haiduk) impersonated Nicole Walker (Arianne Zucker) with the help of a state of the art latex mask and voice changer. Kristen had saved Nicole’s life after she was presumed dead in a warehouse explosion. Kristen then returned to Salem disguised as Nicole in order to win Brady Black (Eric Martsolf) back. Her plan to seduce him workedand she became pregnant with their daughter Rachel. </p>

<p>When it comes to evil twins, it doesn’t get much more psychotic than serial <em>General Hospital</em> killer Ryan Chamberlain (Jon Lindstrom). Ryan followed Felicia Jones (Kristina Wagner) to Port Charles after she witnessed him commit murder in Texas, then she developed amnesia. The two dated until Felicia’s memories returned right as he proposed, but Mac (John York) saved her from the mad man. Eventually his good twin Kevin Collins came to town, forcing him to spend a long time making sure everyone knew he was a psychiatrist and not a psycho like his brother. Ryan was believed to have died in a funhouse fire, but years later it would be revealed he survived and Kevin had hidden him away at Ferncliff while trying to cure him. Ryan eventually escaped, locked Kevin in Ferncliff, and began killing again while using Kevin’s identity as his cover. Ryan was eventually caught and remains locked upin Pentonville.</p>

<p>Twins can sometimes seem to come out of thin air on daytime, just like with <em>Young & Restless’</em> Mariah Copeland (Camryn Grimes) did when she arrived in Genoa City in 2013, hired by Victor Newman (Eric Braeden) to be a literal ghost in order to drive Sharon (Sharon Case) crazy while she was off her bipolar meds. Fans were fine with the sudden sibling though since they were so devastated when young Cassie died after a car accident in 2005 – but not before cryptically telling Nick (Joshua Morrow) from her deathbed that he and Sharon would have another daughter. Years later, prophecy fulfilled.</p>

<p>On <em>Bold & Beautiful</em>, after twins Phoebe (Mackenzie Mauzy) & Steffy (Jacqueline MacInnes Wood) made it through their mother Taylor’s (Hunter Tylo) harrowing pregnancy, they had just a few happy years before Steffy fell off a boat and was presumed eaten by a shark when they were just toddlers. Thankfully, she was only kidnapped by a deranged stalker of Ridge’s and safely returned. They both went to school overseas to grow up, and when they returned to LA they tried to live life among the Forresters. Phoebe was devastated when the boy she was dating, Rick (Kyle Lowder), fell in love with her mother, and while fighting with him in his car she caused him to crash which led to her own death.</p>

<p>Perhaps the strangest set of twins to come to daytime was <em>Days of our Lives’</em> Cassie (Alexis Thorpe) and her twin Rex (Eric Winters) were discovered half-naked in pods after a 2002 meteor shower, which led people to initially believe they were aliens. The twins had matching tattoos of a phoenix, which initially linked them to Stefano (Joe Mascolo), but that wasn’t the case at all. The twins were really the children of Kate (Lauren Koslow) and Roman (Wayne Northrop, Josh Taylor), made up of their stolen sperm and eggs. This confusion in parentage led to some near familial hookups before the truth was revealed at Caroline’s (Peggy McKay) funeral when everyone thought she had been killed by a serial killer.</p>

<p>No set of twins on daytime have probably had their history re-written more than Tony and Andre DiMera (Thaao Penghlis) on <em>Days of our Lives</em>. Andre was originally written as Tony’s cousin, who with plastic surgery, looked exactly like Tony. He took Tony’s place and went on a murdering spree in Salem. Andre was originally killed when he drowned in quicksand, but years later it would be revealed Andre was alive and posing as Tony for decades in Salem, while the real Tony was left to die on an abandoned island by his father Stefano DiMera (Joseph Mascolo), but was eventually rescued. Andre was also re-written to be Stefano’s secret son and Tony’s brother. After several deaths and resurrections, Andre was eventually killed when Abigail DiMera (Kate Mansey), suffering from Dissasociate Identity Disorder, killed him. </p>

<p><em>One Life to Live’s</em> Victoria Lord (Erika Slezak) gave birth to fraternal twins by two different fathers. When Mitch Laurence (Roscoe Born) returned from the dead he told Viki that he had drugged and raped her around the same time she and Clint Buchanan (Jerry verDorn) conceived Jessica and had unknowingly become pregnant with fraternal twins, one fathered by Clint, Natalie (Melissa Archer), and the other fathered by Mitch, Jessica (Bree Williamson). The twins were often at odds with one another, and Jessica and Natalie fully reconcile by the end of the series and a DNA test proved that Jessica was indeed Clint’s daughter and not Mitch’s.</p>

<p>After Steve Burton left <em>General Hospital</em> as Jason Morgan, Billy Miller was cast in the role. When his character debuted he was badly injured in a car crash, requiring facial reconstruction. The crash also caused him to lose his memory. In time it was revealed he was Jason Morgan back from the dead, but when Steve Burton returned claiming to be the real Jason, a long-lost twin and memory mapping plot was exposed, orchestrated by Helena Cassadine (Constance Towers) with the help of Cesar Faison (Anders Hove) and his son Peter August (Wes Ramsey). It would be revealed that Andrew “Drew” Cain was stolen at birth by Heather Webber (Robin Mattson) and eventually given to Betsy Frank (Betsy Franco) to raise along with Franco Baldwin (Roger Howarth), the son of Heather and Scott Baldwin (Kin Shriner). Drew and Jason shared the same memories due to Helena’s experiment and had a strained relationship, but made peace before Drew’s plane mysteriously went down and he was presumed dead.</p>

<p><em>General Hospital’s</em> twin sisters and WSB agents Anna Devane and Alex Marick, who also appeared on <em>All My Children</em>, have a long history of being at odds with one another. In 2019 Alex imprisoned Anna and posed as her sister in order to try and retrieve The Chimera Project, a top-secret biological weapon, which brought her face to face with Valentin Cassadine (James Patrick Stuart). The two shared a past love affair, but again she was posing as her sister at the time, leaving Valentin hating Anna for years by mistake. Alex and Anna were also experimented on in the same memory mapping project that Drew and Jason were, and Anna is not sure which of her sister’s memories she has. Alex, not Anna, may be the real mother of Peter August (Wes Ramsey), who Anna believes is her son from a plot years ago in which she seduced Cesar Faison (Anders Hove) and became pregnant.</p>

How to Watch All My Children and...

Posted 55 seconds ago
Back to Top
ad