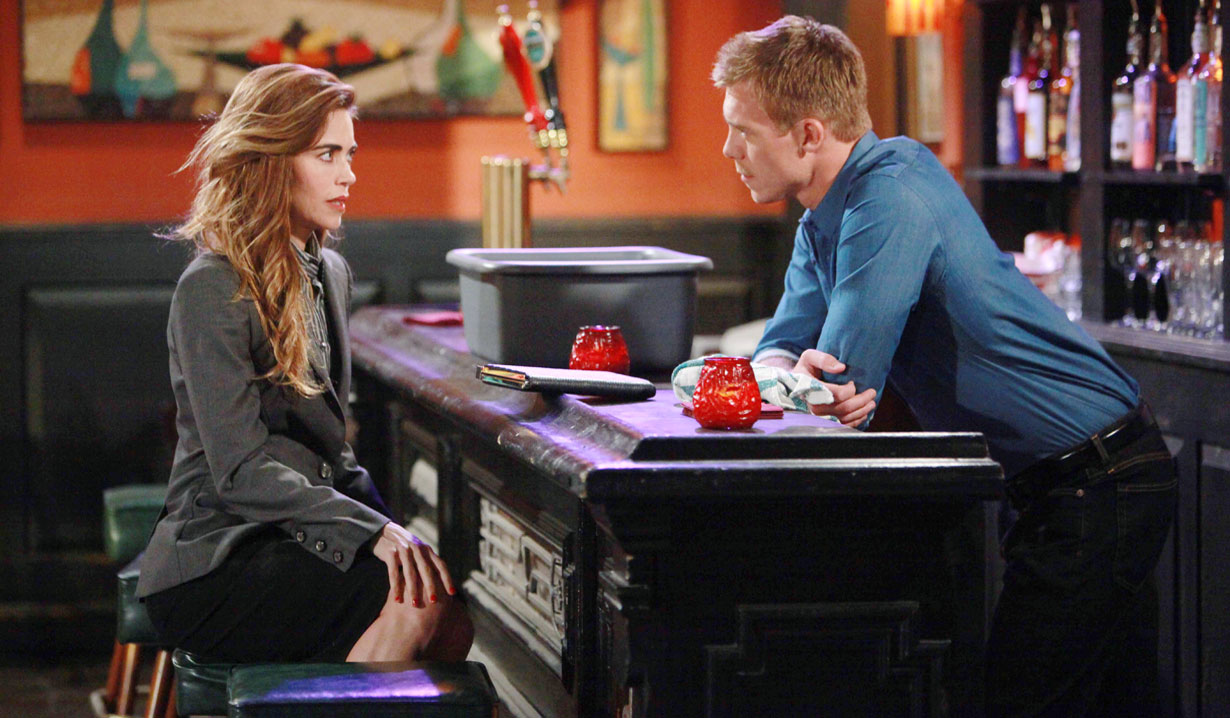 Bill was questioned about his secret room on “B&B.” Jack appeared to Abby before she escaped Shady Hills on “Days.” Finn made a major confession to Rachel on “GH,” and Travis punched Luca on “Y&R.”

A new week in daytime is upon us, so be sure to catch up on the previous episodes through Soaps.com’s highlights and daily soap opera recaps.

Let Cathy Rankin lead you through the past week’s highlights in our Soaps Roundup!

The Bold and the Beautiful:
Bill played house with Katie and Will and deterred Liam’s questions surrounding his secret room and the earring he found in it. After he warned Steffy that she simply was not allowed to leave Wyatt, Bill professed his love to Brooke and informed that they would remain a couple on the sly while he stayed married to her sister. They shared some alone time in Brooke’s bedroom until Rick arrived outside the door, forcing Bill to hide. As Rick commented on his mother hiding a man in her room, Liam met with Steffy and vowed to follow his father’s martial standards and be a man of honor. However, Bill proved to pick favorites when he sided with Wyatt over Liam at Spencer Publications. Over at Forrester, Ridge made Steffy suspicious when he kissed up to Rick and insisted he stay on at the company. Read the Bold and the Beautiful daily recaps for details as to why Ridge handed Douglas over to Thomas and agreed not to call the baby his son any longer.

Days of our Lives:
Deimos called out Kate and Nicole’s names in his sleep then admitted to Chloe that Kate tried to kill him. After they had sex, Chloe realized Deimos had feelings for Nicole and ordered him to leave. Over at Shady Hills, Abby had nightmares of Ben, igniting an aerosol can and Jack saving her from the fire. She awoke and begged Chad and Jen to get her released. While Chad made plans to break Abby out, who was under investigation for the fire, she couldn’t wait and escaped the mental hospital on her own. Aiden got Chase transferred to Shady Hills, where Ciara accepted a volunteer job and came face to face with her rapist. Aiden spotted Rafe and Hope sharing a close moment in the Horton Square and accepted Andre’s deal to get Rafe out of Hope’s life in exchange for his freedom. Later, after a nightmare, Hope asked Aiden to go to the Green Mountain Lodge for a getaway. Aiden accepted and it wasn’t long before Andre was released from prison after a man came forward and confessed to Stefano’s murder. Read our Days of our Lives daily recaps for Adrienne’s reaction to Lucas’ marriage proposal.

General Hospital:
Huxley Lynch held Ava and Nik hostage in a room and demanded Ava turn over a Greek figurine, the Weeping Nyad, stolen from Lynch Manor 50 years ago. Ava sent Huxley on a wild goose chase to her hotel room, where Sam and Jason hid upon Huxley’s arrival. Back in the locked room, Nik admitted to Ava that Spencer was the only one who knew he was alive before they managed to escape Huxley’s assistant, who ended up tasing Ava along the way! Later, Jason and Sam arrived and confronted Huxley, who agreed to help find Nik if they allowed him to keep Ava. Julian arrived at the Port Charles PD and told Alexis that he believed she stood a better chance at standing trial for Carlos’ murder. Liz caught Rachel leaving the locker room at GH then ran into a half-naked Franco. While Rachel returned to the Metro Court with the contents Finn had requested from the hospital, and learned he was dying, Franco went to Liz’s where they shared a kiss. Read our General Hospital daily recaps to hear who received a package containing a sex toy and who received a ghostly visit.

The Young and the Restless:
Billy got rid of Ashley, who interrupted his alone time with Phyllis, and professed his love to his brother’s wife. At the club, Hilary told Jack that Neil had kidnapped her, leading Jack to confront Neil in a rage. Though Neil and his family feared they’d all go down due to Neil’s actions, Ashley convinced Jack not to turn Neil in. After Devon finally saw Hilary’s true colors, she lured Jack in with her fake hysterics and announced she was leaving Devon. Another oil crisis rocked Newman, leaving Nick, Summer and Luca to suggest Travis had access to Vikki’s computer and sabotaged them. As Vikki began to have doubts about Travis, Luca confronted him and received a punch! Elsewhere, the results of Constance’s exhumation proved poison had been found on the body. As Victor instructed a mystery woman to plant more evidence against Adam, Kevin agreed to help Vikki find out who’d been sabotaging Newman. He uncovered something shocking in the Newman computer files then confronted Natalie about working with Victor. Read The Young and the Restless daily recaps to find out who was warned they’d shoot to kill.