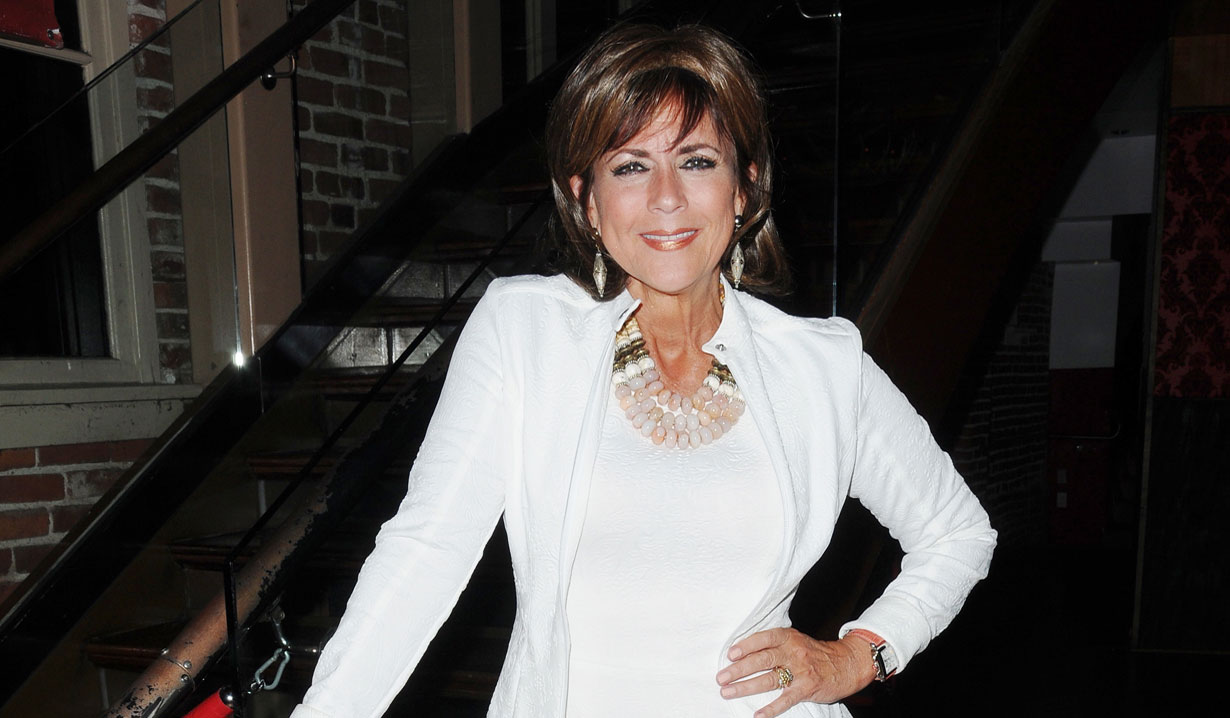 This week in Soaps.com’s column surrounding former actors of canceled soaps “All My Children,” “As the World Turns,” “Guiding Light,” “One Life to Live,” “Ryan’s Hope” and “Santa Barbara” we have a Lifetime renewal, a Tony Award winner, a blast-from-the-past interview, a star-studded film, a new ABC series based on a popular film, soap stars turned realtors and more!

Cameron Mathison and former co-star Susan Lucci talk Ryan, Erica and nudity.
Interview! Prior to the June 6 return of “Devious Maids,” “All My Children” co-stars and onscreen loves Cameron Mathison (Ryan Lavery) and Susan Lucci (Erica Kane) sat down for an “Entertainment Tonight” interview, where Mathison works as a correspondent. Not only did they discuss season four of “Devious Maids,” including how Lucci feels about the more scantily clad scenes, they shared footage of love scenes from their Pine Valley days. Mathison recalls being a soap newbie and learning he’d be sharing scenes with Lucci – in his underwear! Of Erica Kane, Lucci expressed, “She was such a juicy character…” Watch the fun interview and tune in to Lifetime Mondays at 9:00 PM to watch Lucci as Genevieve Delatour.

As soon as @therealsusanlucci walked through the door, all the great memories came flooding back. SO great to see… https://t.co/x3REmx9NV0

Austin Peck and Terri Conn Peck, realtors at your service.
Soap opera vets and husband and wife team Austin Peck and Terri Conn Peck, who’ve appeared together on soaps such as “As the World Turns” and “One Life to Live,” have teamed up professionally again. Not only are they busy raising a family they’ve been selling New Jersey real-estate as well. Whether you’re in the market to sell your current home or purchase a new one, the Pecks work for and have properties listed with Keller Williams Valley Realty.

Colleen Zenk, Yancy Butler and Justin Deas team up in Blue Lives Matter.
Daytime alums Colleen Zenk, Yancy Butler and Justin Deas appear in the film “Blue Lives Matter,” which was screened at the Hoboken International Film Festival earlier this month. Directed by Dylan Bank and produced by Kenneth Del Vecchio, Zenk plays Judge Witaker with Butler as Dr. Penelope Lang and Deas as juror number twelve as the story follows a police officer, prosecutor, judge, and forensic scientist who plot against guilty murderers by manufacturing evidence against them to prove their guilt, due to lack of initial proof. Zenk is best known for playing Barbara Stenbeck on “As the World Turns” where Yancy appeared as Ava Jenkins in 2007. Though Deas first appeared in daytime as Dr. Bucky Carter on “Ryan’s Hope” (1975 to 1978), he played Marco Dane on “One Life to Live” in the 1980s, Tom Hughes on “As the World Turns” from 1981 to 1982, Keith Timmons on “Santa Barbara” from 1986 to 1988 and is most recognized for his “Guiding Light” character Buzz Cooper (1992 to 2009). Keep an eye out for the film in January 2017.

Tammy Blanchard in The Inherited.
“Guiding Light’s” Tammy Blanchard (Drew Jacobs, 1998 to 2000) appears in the Lifetime thriller “The Inherited,” previously titled “Stranger in the House.” The actress plays Wendy Danver and surrounds a woman named Eve who along with her husband moves into the home that was willed to him by his first wife. Not only did he live there with the deceased, she died under horrific circumstances in the home, which ends up consuming Eve with suspicion and madness. The cast includes Jenn Liu as Eve Stewart, Annabella Sciorra as Mrs. Menabar and Nathan Darrow as Tom Stewart. Tune in Tuesday June 21 at 10:00 PM and Wednesday June 22 at 2:00 AM on LMN (Lifetime Movie Network).

Nia Long stars in Uncle Buck.
Before Nia Long made it big with such hits as “Friday,” “The Fresh Prince of Bel-Air” and the “Big Momma’s House” franchise, she appeared in daytime playing Katherine ‘Kat’ Speakes on “Guiding Light” in 1991, a role she played until 1993. Her latest project for ABC, “Uncle Buck,” is based on the 1989 John Candy movie and follows the fun yet irresponsible Buck Russell (Mike Epps) who moves into his brother (James Lesure) and sister-in-law’s (Long) home as a nanny replacement for his nieces and nephews. The comedy debuted on June 14 and airs Tuesdays at 9:00 PM.

Renée Elise Goldsberry wins Tony Award.
Back in May, Soaps.com announced that “One Life to Live” alum (Evangeline Williamson) Renée Elise Goldsberry was nominated for a Tony Award. We are excited to report that on Sunday June 12 the actress took home the award for Best Performance by an Actress in a Featured Role in a Musical for her role as Angelica Schuyler in “Hamilton.” In fact, the play took home eleven awards total! Her former co-star Kassie DePaiva (Blair Cramer; “Days'” Eve Donovan) tweeted her congrats:

It's delayed here… But congratulations to my dear friend I am so proud of her she is so deserving @reneeelisegolds pic.twitter.com/JhrhRC4rIQ

Josh Kelly’s unREAL renewed for season three.
“One Life to Live” alum Josh Kelly plays Jeremy Caner on “unREAL” and has since the drama debuted on Lifetime in June 2015. The popular series has been renewed for season three and recently returned with season two. And that’s not all… Fans can expect a few more seasons after that! During a screening and panel discussion with Variety’s Elizabeth Wagmeister, co-creator Sarah Gertrude Shapiro said that she’s already thought about plans for season four and five and the possibility that season five will be the show’s last. However, though that was the plan when Shapiro first sold the show to Lifetime, an end time has not been set in stone yet. Tune in Mondays at 10:00 PM for all the bedlam behind-the-scenes of the fictional reality dating competition, “Everlasting.” The series also stars Kim Matula (“The Bold and the Beautiful’s” Hope Logan) as Tiffany.