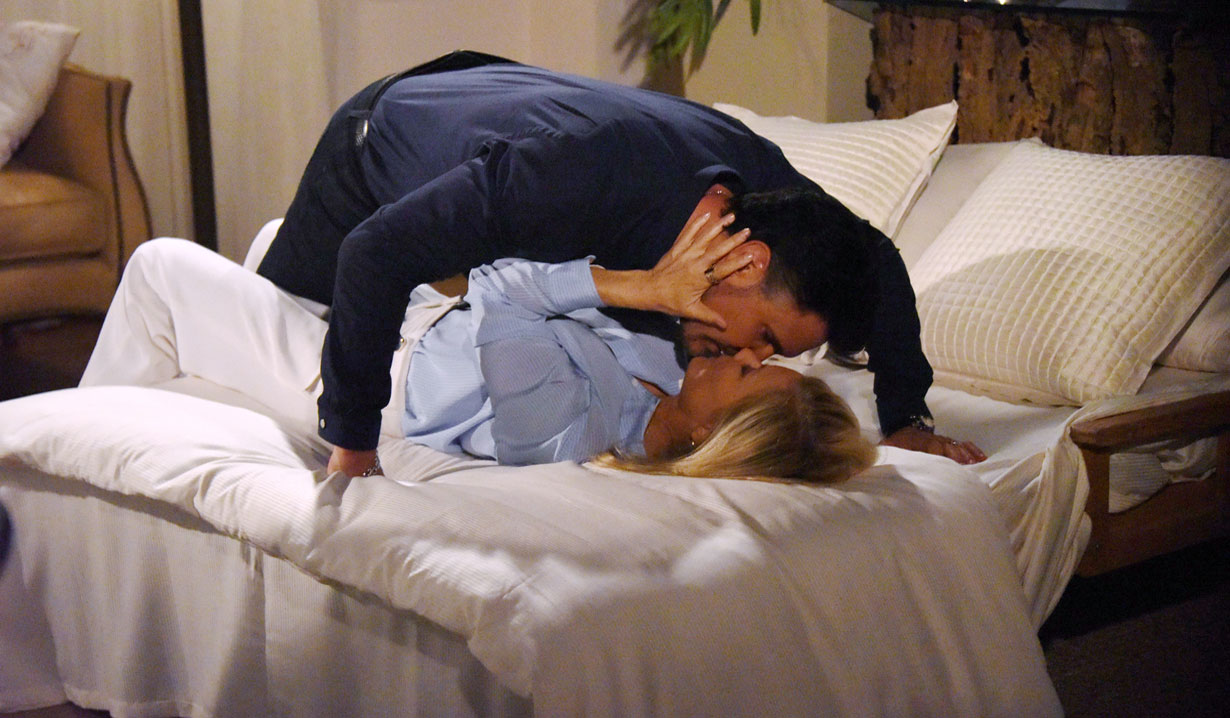 Bill and Brooke confronted Ridge, Caroline and Thomas about the paternity secret then professed their love on “B&B.” Kate set Nicole up for Deimos’ murder on “Days.” Nathan confessed all to Maxie in regards to Claudette and the shooting of her lover on “GH,” and Luca revealed Travis’ hidden past to Vikki on “Y&R.”

Soaps.com has episode highlights and daily soap opera recaps to get readers caught up on last week in daytime before a new round of drama begins.

The Bold and the Beautiful:
Katie walked in on Bill discussing the paternity secret with Brooke and felt betrayed yet again by her husband risking their marriage for her sister. She snapped and told Bill to go be with Brooke. Bill and Brooke confronted Ridge, Caroline and Thomas with the truth about Douglas’ paternity. After Ridge agreed to be nicer to Rick, Brooke and Bill said they’d keep the secret. Later, Bill and Brooke professed their love with a kiss and planned to tell Katie they were reuniting. However, Katie had something to tell them first. Elsewhere, Liam and Steffy refused to ever forgive Quinn for ruining their future and ordered her away. Quinn watched as Steffy held Liam close. Though Steffy planned to honor her commitment to Wyatt, Liam vowed never to give up on her. Later, Steffy caught Quinn telling Wyatt it was only a matter of time before she left him for Liam. Steffy ordered Quinn away, who told Deacon Liam’s presence would always be a threat to Wyatt’s happiness. Read the Bold and the Beautiful daily recaps to find out who Liam caught breaking into his house, which left Wyatt stunned.

Days of our Lives:
Summer and Dario bonded over their unreciprocated feelings for Brady and Nicole then had sex. As Summer went and professed her love to Brady, Fynn backed away from Kayla for her and Steve’s sake. Kate watched as Deimos and Nicole kissed until he realized she’d been working with Victor. Kate recorded the tension-filled argument where Nicole shoved Deimos before walking away then confronted him for deceiving her. After Kate gave him a shove as well, Deimos hit his head and fell into the river. Kate spotted Nicole’s fallen earring then called Roman to report she’d witnessed ‘her husband’ Deimos’ murder. While Roman questioned Nicole, Kate offered Aiden a quarter of a million dollars to obtain a marriage license for her. Nicole was soon released and didn’t waste any time slapping Kate hard across the face, as Deimos struggled to get help – and found it by calling Chloe, who knew him as Robert. Rafe was upset to hear his mother had invited a friend to stay at his place until he met the young, beautiful Blanca. Read our Days of our Lives daily recaps to learn what decision Hope made in regards to Aiden after a visit from Bo, their son Zack, Stefano and Larry Welch.

General Hospital:
Rachel’s mother Naomi explained how she helped send her father to prison so they wouldn’t take the fall for his crimes. The Feds owed her and she offered to help Rachel. When Rachel ranted about Liz, Naomi was shocked to learn her last name was Webber. At Sonny’s cabin, Jason received word that a warrant was out for his arrest. Lucas was interviewed at the hospital but could only pinpoint his assailant as being a doctor, dressed in a white coat, cap and mask. Though Finn denied having a drug problem, Monica ordered him to be tested. Nathan arrived home with Maxie and confessed that he’d shot Claudette’s lover in a drunken rage. He didn’t remember what the man looked like, Claudette never revealed his identity and lucky for Nathan the shooting had never been reported. Maxie didn’t know if she could ever trust Nathan again. While charges were dropped against Sabrina, Alexis arrived home and found Julian holding the evidence she planned to use to turn him in. Read our General Hospital daily recaps to hear what transpired during Nik’s prayer service at Wyndemere.

The Young and the Restless:
Billy learned Phyllis made a deal with Bethany in order to cover her involvement with him in the motorcycle accident and their affair. Though Bethany had fun making public jabs about the situation, Billy wanted Phyllis to come clean with Jack. Elsewhere, Neville saw signs of a relapse in Hilary and realized there were issues with his protocol, leading Ashley to fear she could be relapsing too. Vikki visited Victor and accused him of sabotaging his own business. After Victor turned his back on Vikki, he refused to give in to Ian’s prodding about having set Adam up. Ian lied to Adam that he’d gotten a confession out of Victor and convinced him to arrange to be transferred to a minimum-security facility. Meredith reappeared and told Victor how unprofessional she felt for having been intimate with him. After they had sex again, Victor learned of Ian’s lies to Adam and gave him a beating, which landed Victor in solitary – and Ian in the infirmary with Meredith. Read The Young and the Restless daily recaps for Vikki’s reaction to Luca’s reveal surrounding Travis’ past and possible link to the latest crisis at Newman.