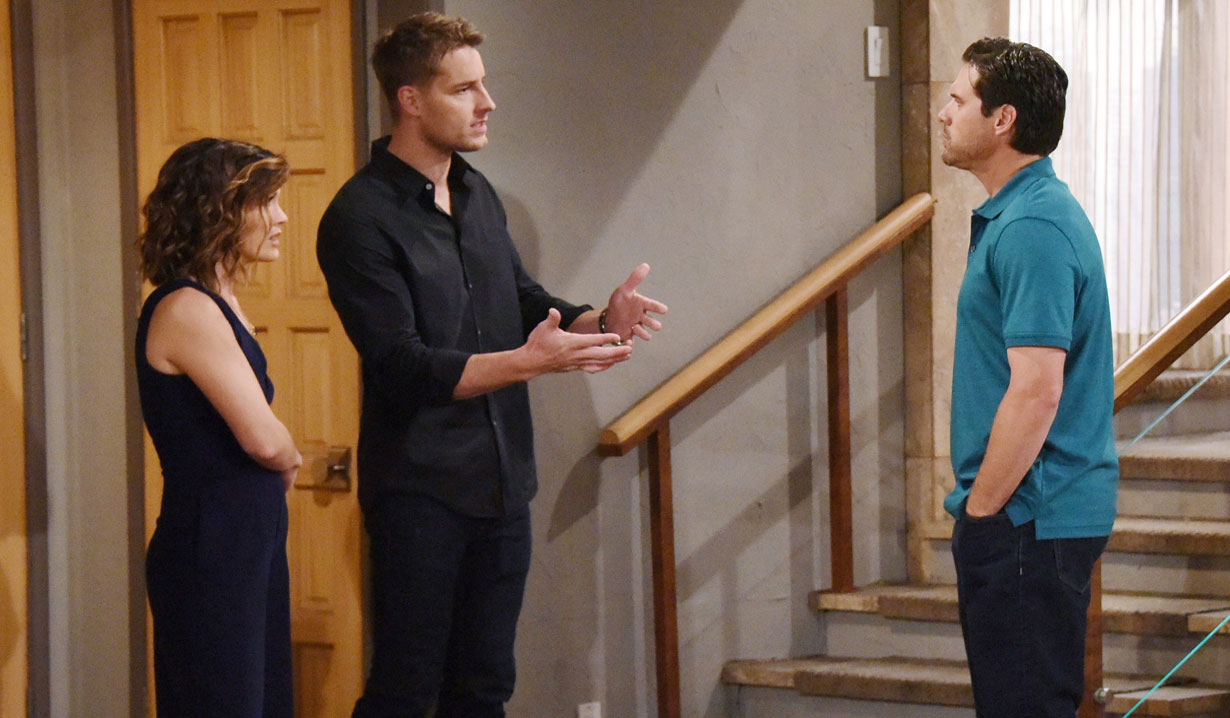 Bill learned Ridge’s paternity secret on “B&B.” Kate got an eyeful in the park on “Days.” Jason and Rachel were accused of murdering Nik on “GH,” and Travis uncovered Victoria’s true identity on “Y&R.”

New drama is on the horizon in daytime. Take a look back at some of last week’s episode highlights and read Soaps.com’s in-depth daily soap opera recaps for all the juicy details in between!

Get this week’s rundown of highlights from Cathy Rankin in the Soaps’ Roundup!

The Bold and the Beautiful:
Sasha admitted to Zende that she faked the pregnancy and wanted to be credited for being honest. Though she asked Nicole for forgiveness, Nicole refused her. It wasn’t until Julius convinced his family to forgive him that everyone agreed to give Sasha another chance. Caroline was surprised to see Thomas still at the mansion and learned he wasn’t going to let Ridge force him out of town – or out of Douglas’ life. When Ridge appeared, Thomas made it clear he was in charge of his life, not Ridge, and planned to watch his son grow up. Elsewhere, Bill wanted Ridge out as CEO of Forrester and ordered Justin to dig up dirt on the dressmaker. Katie found Thomas at Forrester and admitted she knew the truth about Douglas’ paternity and that she’d been the one who told Ridge to come clean. Just as Katie went on to say she couldn’t let Ridge keep such a huge secret, Bill overheard outside the door and later got Katie to admit the truth surrounding Ridge, Douglas and Thomas. Katie warned Bill not to repeat the secret. Read the Bold and the Beautiful daily recaps for details regarding Rick’s big announcement, which led to Bill telling Brooke about Douglas’ paternity.

Days of our Lives:
Rafe witnessed Hope comforting Aiden over Chase’s attack. After he privately urged Hope to figure things out where Aiden was concerned, she made plans to leave town. Ciara received word from Hope that Chase was in the hospital and instructed a drunken Chad to listen for the baby while she stepped out. Ciara then made her way outside of Chase’s hospital room. In LA, though Joey tried to be the bad boy Jade wanted, it hadn’t been enough and she dumped him. Steve found Joey at the commune but before they could head home, Joey confessed to a crime to save Jade and was arrested. Fynn and Kayla stopped at a hotel in order for her to rest, where they shared a kiss. Though Kayla stopped things from going any further, John arrived and noticed a piece of discarded clothing. Read our Days of our Lives daily recaps for Kate’s reaction to Deimos and Nicole kissing when he was supposed to be getting ready to whisk her off to Vegas to elope.

General Hospital:
Finn denied Obrecht’s accusations, which she later shared with Carly, that he’d been responsible for administering a deadly dose of muscle relaxers into Lucas’ system. After Finn revealed information to Rachel about her father, which involved Finn’s dead wife, he became weak and sought her help in preparing a syringe to shoot-up. Elsewhere, though Alexis planned to turn Julian in to the cops, she was deterred from doing so in order to comfort her husband in light of Lucas’ condition. Finally, Lucas woke up. At the mansion, Tracy became territorial with Sabrina’s baby, as Sonny finally relented and worked out visitation terms for Avery with Ava. Rachel accused Jason of murdering Nik at Wyndemere, as Liz accused her of the same. Surveillance footage showed a timeline of Nik, Jason and Sam’s arrivals at the mansion, leading Jordan to pinpoint Jason as a prime suspect. Liz informed Jordan of Rachel’s diamonds and her motive to kill Nik, which turned Jordan’s attention on Rachel. It wasn’t long before someone unexpected arrived in Port Charles – and a search warrant was ordered for Jason’s arrest. Read our General Hospital daily recaps for what followed after Nathan expressed wanting to make a confession to a priest – Father Griffin – and to Maxie.

The Young and the Restless:
Vikki visited a cranky Travis who revealed that his bar was in bad shape and could use ‘an extra twenty grand’. Later, many gathered at the club where Neil announced via press conference that he’d given into his alcohol addiction and would be the Abbott-Winters Foundation’s first patient. As Vikki took the podium and donated five million dollars, Travis appeared. He walked away but later angrily confronted Vikki about being a Newman. Elsewhere, Nick refused to allow Adam to have Constance’s body exhumed again in order to prove he hadn’t killed her. Though Chelsea wanted Adam to reveal Christian’s paternity to Nick, which had been Sage’s dying secret, Adam refused and planned to fight his case in court, where Elise Moxley was assigned to preside as judge. Desperate to prove his innocence, Adam went to the prison and struck a deal with Ian in order to get Victor to confess to having set him up for Constance’s murder. Read The Young and the Restless daily recaps to learn how Phyllis walked away from a motorcycle accident while Billy landed in the hospital and who was diagnosed with a brain tumor.