Soap Summaries: An Antidote, babies abound, a confession and a father’s devastation 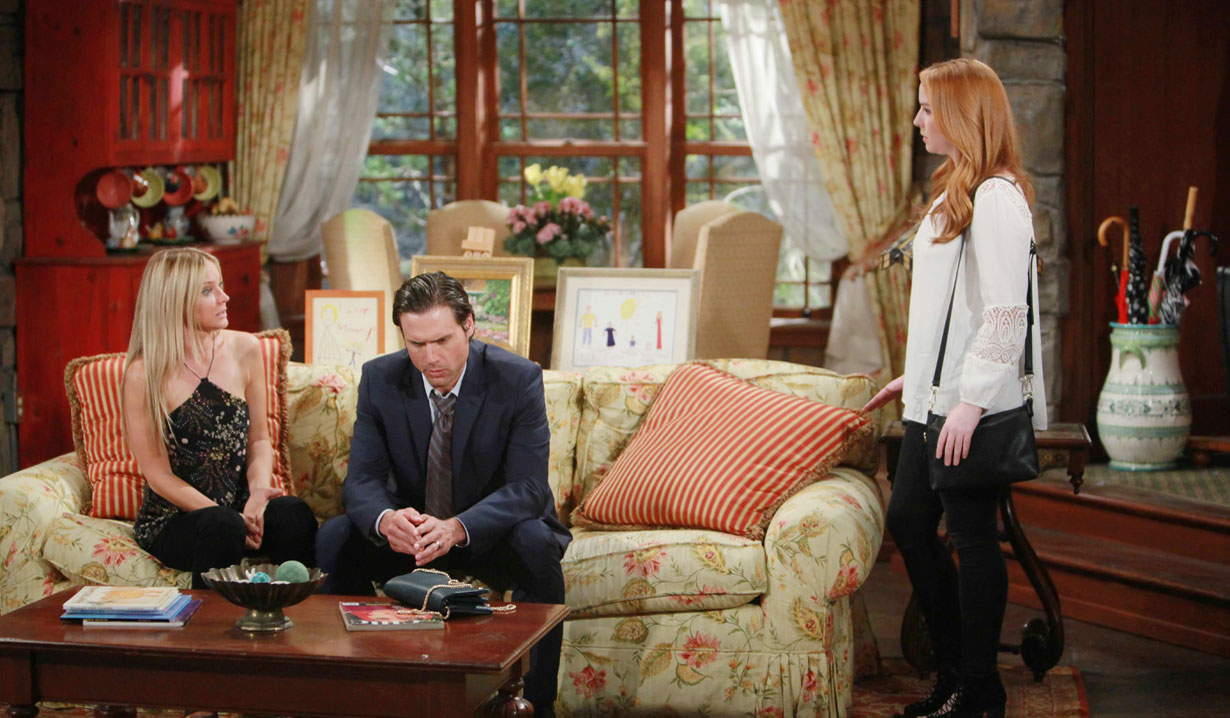 Sasha announced her pregnancy after Nicole gave birth to Rick and Maya’s baby girl on “B&B.” Aiden walked away from Andre’s offer then was threatened with a letter opener on “Days.” Sabrina’s baby was left on the doorstep of the Quartermaine mansion on “GH,” and Nick obtained Sage’s private journal, which led to Sharon’s confession on “Y&R.”

Get your soapy fix with last week’s storyline highlights and read Soaps.com’s daily soap opera recaps for an in-depth look into each episode.

Cathy Rankin gives a rundown of the past week’s highlights in Soaps’ Roundup!

The Bold and the Beautiful:
Quinn professed her love to Liam before the cops took her away to jail. Steffy, having witnessed the scene, expressed the possibility that Quinn’s feelings for Liam appeared to be real. Nicole went into labor and was rushed to the hospital. Zende had plans with Sasha but couldn’t stop thinking about Nicole. He lied to Sasha about needing to go to Forrester then snuck into the delivery room, unseen, where Nicole gave birth to Rick and Maya’s baby girl. After the family cleared out, Zende revealed to Nicole that he’d been there for the birth. He apologized for having been selfish then kissed her. Though Zende returned to Sasha and admitted he’d witnessed Nicole giving birth, he was halted from breaking up with her when Sasha announced she was pregnant. Zende recalled always using protection and warned he’d never love Sasha. Back at the hospital, the family enjoyed the baby and thawed toward Julius, who arrived to meet his new granddaughter. Later, as Sasha shared her pregnancy with Julius, Zende told Nicole the news. Read the Bold and the Beautiful daily recaps for Katie’s reaction to Brooke crawling out from underneath her and Bill’s bed.

Days of our Lives:
Nicole continued to put herself into close proximity to Deimos and warned Justin not to ruin her progress. After Deimos agreed to return some of Victor’s money in exchange for special treatment by Justin and the DA’s office, he accepted Kate’s marriage proposal then passionately kissed Nicole. Elsewhere, Hope felt lost and torn between Rafe and Aiden, who she believed had been a victim of Andre’s manipulations. Aiden visited Andre, who offered to admit Aiden hadn’t tried to kill Hope – if he got him released. Aiden refused then ran into Ciara and questioned her about the rape, which sent her fleeing back to the mansion and into Chad’s arms. Aiden tried to get through to Hope again, which led her to Bo’s grave for guidance. Rafe also had trouble dealing with Aiden’s return and feared he’d lose Hope, who he later spotted kissing Aiden. Shawn and Belle shared a kiss as well! Read our Days of our Lives daily recaps to find out what Theresa did to make Summer look bad and how those at the hospital responded to an antidote to the deadly virus.

General Hospital:
Alexis realized Julian used the dagger to kill Carlos and stood by as he destroyed evidence – except one piece that she privately stashed away. After Sonny confronted Alexis, who remained loyal to Julian, he disowned his longtime friend. A baby was left on the doorstep of the Quartermaine mansion. When Michael appeared and saw Tracy with the baby, he realized he was Sabrina’s son, which an immediate DNA test proved. Michael turned to Sonny for help, as Sabrina resurfaced. After Finn enlisted Felix’s help in obtaining some muscle relaxers from the hospital supply station, he found another one of his patients flat-lining. Obrecht demanded an investigation against Finn and began an investigation of her own after the board sided with Monica and Finn. Jake ran off from the hospital after learning he couldn’t see Franco for therapy anymore. Franco found Jake at his house and called Liz. Read our General Hospital daily recaps to hear where the latest clue to Helena’s mystery led Kevin and Laura, who came to a horrifying conclusion and why Carly felt the need to stop Ava in her tracks.

The Young and the Restless:
Phyllis assured Jack she only looked to Billy as a kindred spirit and warned Billy they would never have sex again. When Phyllis caught Hilary giving Jack marital advice, she threatened to physically shut her mouth then ran into Billy and accepted his kiss. Lily threatened Hilary next, as Cane found Neil downing booze to forget about her. Luca’s goon took a photo of Victoria and Travis as they left the bar and headed to his place to have sex. Meredith spoke Victor’s praises to Nikki at the club, hoping to get him released soon. As Nikki warned how dangerous Victor was, Meredith’s father confronted Victor and insisted he’d stay behind bars. Later, Victor confessed to Meredith that his son tried to turn her father against him, and charmed her with a kiss, as Nikki made plans to file for divorce. Elsewhere, Sharon freaked out over Nick’s insistence on reading Sage’s journal in private and revealed Sully’s true paternity to Mariah. Adam had reason to freak out as well when Nick accused him of killing Constance Bingham and Dylan announced the body would be exhumed. Read The Young and the Restless daily recaps to learn who confided a personal experience to Stitch, who was forced to say goodbye to Max.