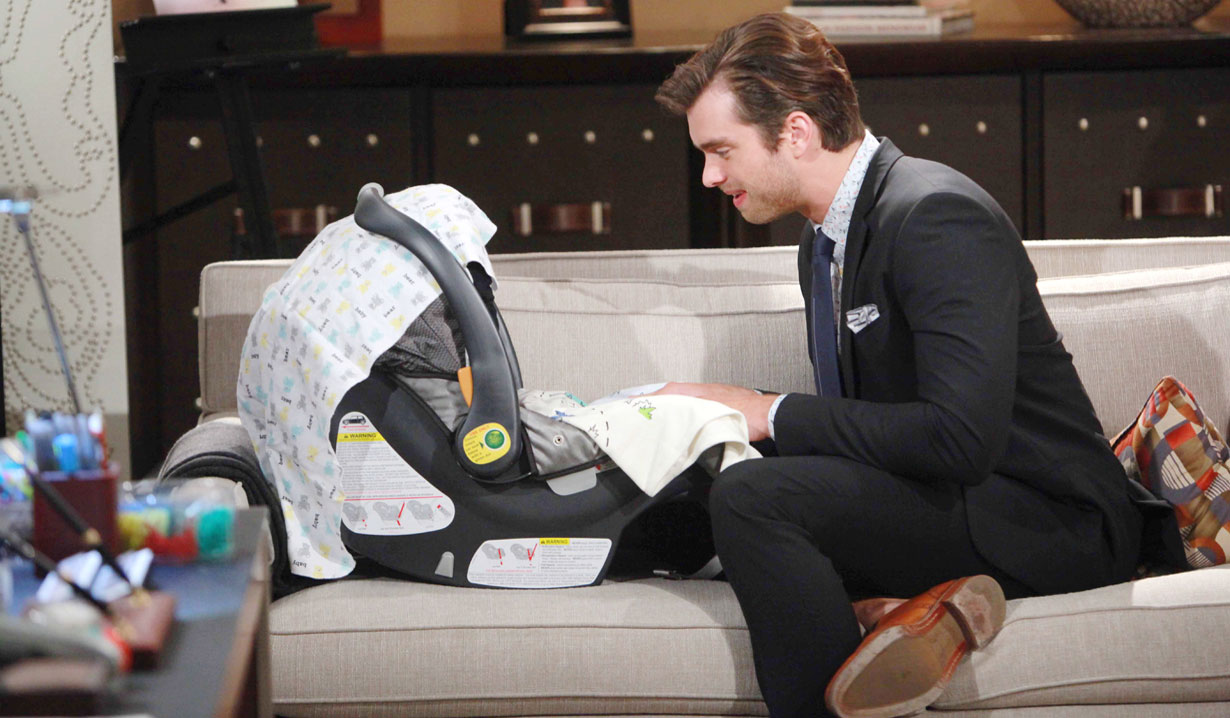 The truth is out.

Julius was forced to face his secret, as was Ridge, on “B&B.” Hope was startled by Aiden’s reappearance on “Days.” Things became tense between Nathan and a shirtless Griffin on “GH,” and Sage left Adam a desperate voicemail before her death on “Y&R.”

For a quick refresher of last week’s drama, Soaps.com has storyline highlights below and invites fans to read our in-depth daily soap opera recaps for more details into each episode.

Watch the week’s highlights with Cathy Rankin in Soaps’ Roundup!

The Bold and the Beautiful:
Sasha admitted to Nicole that they were sisters but begged her not to tell Julius that she knew. Nicole refused to allow Sasha to feel ashamed and vowed to protect her. As Sasha privately told Zende the truth, Nicole confronted Julius. He initially denied it then emotionally admitted he’d had an affair with Sasha’s mother. No one knew he and Vivienne had been estranged over Myron and Lucy was the only one who offered him support. After Nicole stormed off, Julius found Sasha and called her selfish for telling Nicole. Sasha begged for Julius’ love but he ordered her to leave town until Nicole appeared with Vivienne and forced him to tell her mother the truth. Vivienne was devastated and turned Julius away. Katie spotted Ridge in a news report photo of Dr. Wolin’s accident and went to Forrester, demanding to know if he pushed Wolin in front of the truck. Ridge denied it but did admit Douglas wasn’t his biological son. Read the Bold and the Beautiful daily recaps to hear how Katie reacted when Caroline admitted Thomas was Douglas’ father and how Thomas put the pieces together when Ridge revealed the truth.

Days of our Lives:
Justin joined Victor in his quest to reclaim what Deimos took from him and went to his uncle with a proposition, as Victor and Maggie were released from the hospital and moved into the condo next to Brady and Theresa. At his wife’s persistence, Victor allowed Summer to move in with them to help with Maggie’s care. Beforehand, Summer pulled a big con on Brady, which made her 50K richer but left her to deal with a man from her past falling to his death. Summer called Dario for help. Elsewhere, Demios offered Nicole the CEO position of Basic Black. Kate became irritated but Demios privately insisted Nicole would answer to Kate, who found a photo of Helena. After Deimos admitted that he’d loved her, Nicole promised Kate she wasn’t looking to steal Deimos away. Joey stole the keys to Steve’s motorcycle and ran away with Jade, as Hope reluctantly allowed Ciara to move onto the DiMera property. Hope had something else to worry about – presumed-dead Aiden appearing in her living room! Read our Days of our Lives daily recaps to find out who John and Marlena rushed to the ER and how one family’s lunch turned into a disaster.

General Hospital:
Alexis told Julian that Carlos would have to take a deal, considering the new witness in his case. Julian insisted the witness wouldn’t be a problem and soon Hal was found dead. When Anna recalled seeing Alexis badgering Hal she accused her of killing him to assure Carlos went free. Alexis privately asked Julian if he’d had Hal murdered, as Sonny visited Carlos and threatened his life. Carlos panicked, convinced Paul to have him transferred then stabbed Dante during the process, which resulted in a huge accident. Jason got the wrong idea when he caught Franco hiding in the park and convinced Liz to remove Jake from Franco’s therapy. Elsewhere, Rachel claimed to be broke until Nik revealed her secret stash of diamonds. Both had dirt on the other and agreed to stay married. At the courthouse, Andre taunted Jordan until she slapped him but that didn’t stop Andre from taking Jordan to bed. Over at the hospital, Finn agreed to help Carly locate Joss’ kidney donor. While Carly got a head start, by breaking into hospital records, Obrecht found Finn standing over his dead patient. Read our General Hospital daily recaps for Griffin’s reaction to Nathan’s questions about his scar and to learn what Sam uncovered and told Maxie about Claudette.

The Young and the Restless:
Sharon struggled with the guilt of Sully’s paternity, as Nick inquired about Sage’s last words. Sharon lied and said she hadn’t talked to Sage before her death. Paul learned Sage called Adam before the accident. Though Adam lied as well, when questioned, he played Sage’s voicemail for Chelsea, which revealed Sage’s desperation to talk to Adam about Christian. Meredith Gates arrived at Sage’s memorial to extend Victor’s love. Everyone turned Meredith away then met Michael for the reading of Sage’s will. Adam received a sealed letter from Sage admitting she’d known he’d been Christian’s father. Luca secretly enjoyed watching the Newman family fall apart and offered his services to the company. When Vikki refused him, Summer planned to quit but Luca convinced her to stay at Newman. Vikki went to a bar, under a disguise, and chatted with a handsome bartender named Travis and never realized Luca had been tracking her. Read The Young and the Restless daily recaps to learn how Dylan found proof Max started the fire, how Phyllis reacted to Billy’s latest kiss and what huge secret Cane overheard.