Soap Summaries: A baby switch uncovered, a mother dies, a madwoman resurfaces and someone is committed 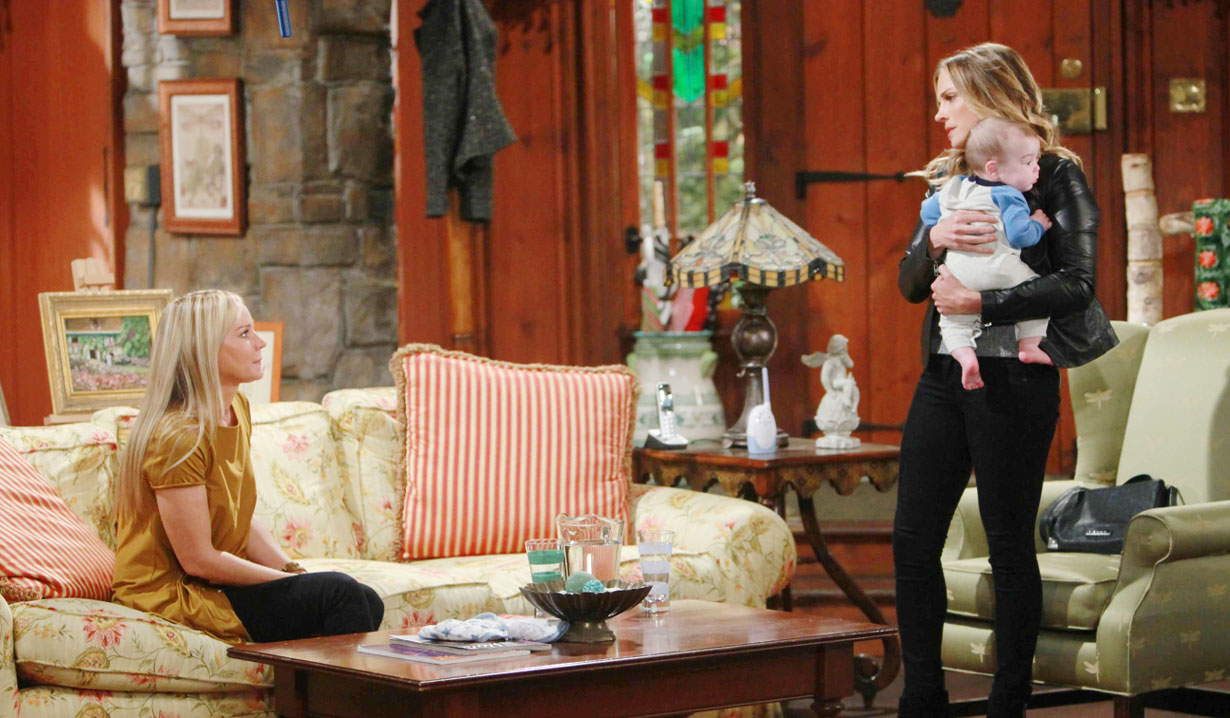 Liam came face-to-face with Quinn on “B&B.” Chad convinced Abby to commit herself on “Days.” Nina reminded Nathan he could end up in prison on “GH,” and Sharon and Sage learned that Sully was in fact Christian before a tragic death on “Y&R.”

Soaps.com invites readers to get caught up through our episode highlights and take a deeper look into last week’s episodes through our daily soap opera recaps.

Watch Cathy Rankin dish on the highlights in this week’s Soaps Roundup!

The Bold and the Beautiful:
Bill promised to find Quinn and make her pay for kidnapping Liam then summonsed Deacon to his office. Deacon claimed not to know where Quinn was then reported back to Quinn that Bill was on the hunt to find her. When Quinn wouldn’t leave LA with Deacon, he realized she still loved Liam and called her delusional. Steffy met with Liam, who vowed to get his life back, which included her in it, and was stunned to see a wedding ring tattoo. Steffy admitted to still loving him, but reminded Liam she made a commitment to his brother. After Steffy left, Quinn appeared and professed her love, claiming Liam loved her too. When Quinn begged Liam to run away with her, he shoved her hard against a wall. Elsewhere, Ridge insisted to Katie that Dr. Wolin misdiagnosed him and demanded she stop questioning him about not being Doulas’ father. Read the Bold and the Beautiful daily recaps to hear what Julius did to infuriate Sasha, which led her to tell Nicole they were sisters.

Days of our Lives:
Chad was devastated after forcing Abby to realize she needed to commit herself and returned to the mansion alone. Elsewhere, Rafe told Hope Deimos made a large payment to Dr. Malcolm through one of his corporations. Knowing revenge wouldn’t bring Bo back, or redeem her for killing Stefano, Hope vowed to concentrate on Ciara. While Rafe romanced Hope, the teens attended their 80s-themed prom and Jade and Joey had sex. Mark tried to humiliated Theo and Ciara, which resulted in Ciara, Theo and others being arrested and dragged into the Salem PD. Judge McNair – Mark’s father – reprimanded the teens to a night in jail. As Deimos had nightmares about Helena, Nicole met with Victor, where a plan was hatched for her to gaslight to Deimos as Helena’s ghost in exchange for 30% of Victor’s net worth. Read our Days of our Lives daily recaps to find out what led to Deimos attempting to suffocate Victor and how Philip responded to Belle’s marriage proposal.

General Hospital:
Jason began to strangle Franco for interfering in his parenting of Jake. After Sam ran interference, someone followed them and spied as they made love in a barn. Later, Sam agreed to investigate Nathan’s first marriage for Maxie, as Nina reminded Nathan he’d end up in Pentonville if Maxie learned the truth about Claudette. Ric visited Sonny to discuss the Carlos situation, as Alexis found a way to get Carlos released. However, when a witness to Duke’s murder suddenly appeared, Julian was alerted that Carlos wouldn’t walk and made plans to deal with the witness. In Puerto Rico, Michael and Felix couldn’t get answers from Sabrina’s aunt, who secretly hid a baby. Back in Port Charles, Kristina visited Morgan and shared details about her relationship with Dr. Parker. While there, a guy showed interest in Kristina, who realized she was attracted to him as well. Read our General Hospital daily recaps to learn who the FBI publicly apprehended and who replaced Obrecht as hospital Chief of Staff.

The Young and the Restless:
Victor joined forces with Ian with plans to use Dr. Meredith to escape. At Newman, as Luca turned down Vikki’s payoff to leave Summer, Summer refused Kyle’s request for another chance. While Sage located Nurse Stevens and demanded answers about her baby, Patty told Sharon she hadn’t been pregnant. Sharon became suspicious about Sully’s paternity and ordered a DNA test. As Sharon learned Sage was Sully’s mother, Nurse Stevens confessed to Sage that Sully was Christian – and that Sharon had a DNA test done. Sage went to Sharon’s and revealed she knew the truth. She reluctantly left the baby with Sharon, for Dylan’s sake, and rushed off to tell Nick. Sharon grabbed the baby and followed to stop Sage, who ended up in a car accident. Sage begged Sharon to let her hold Christian, and to tell Nick the truth, then died with the baby in her arms. Read The Young and the Restless daily recaps for Vikki’s reaction to hearing Billy bought Brash and Sassy and how he accessed the funds in order to do so.