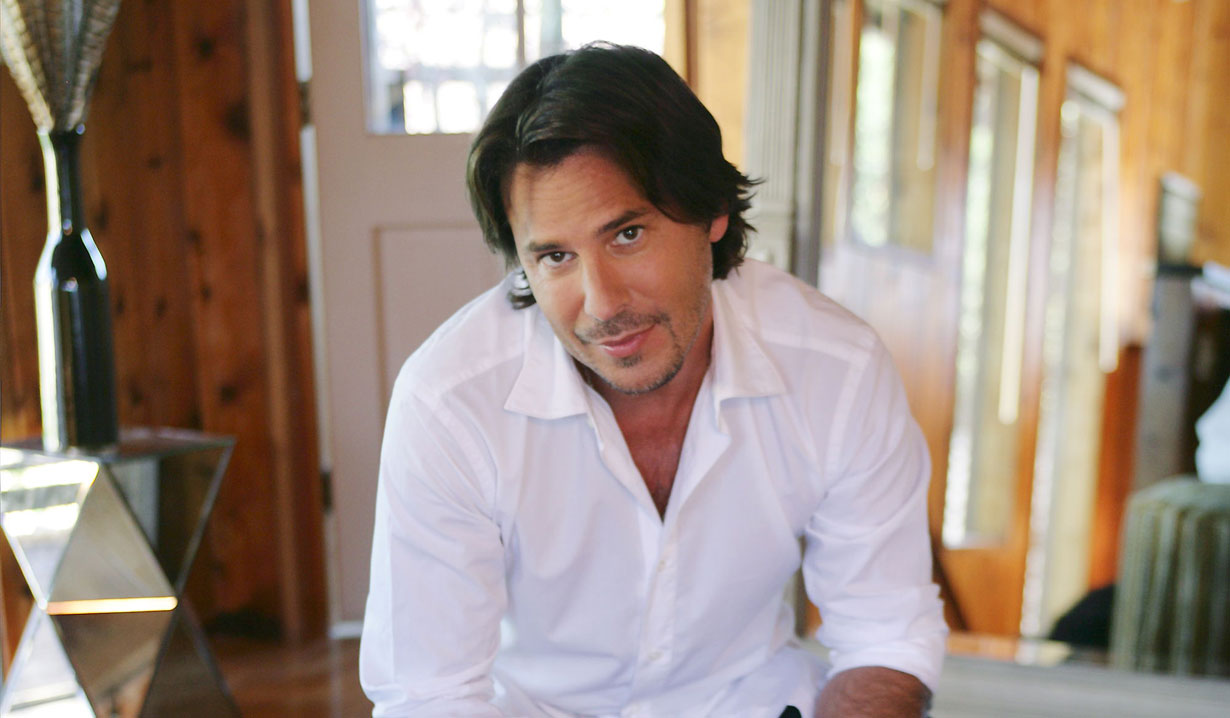 In this week’s column surrounding former actors of “The Bold and the Beautiful,” “Days of our Lives,” “General Hospital” and “The Young and the Restless,” Soaps.com uncovered a new design reality series, a Hallmark movie, films and online roles, book releases and more…

Ricky Paull Goldin co-hosts Save our Shed.
Ricky Paull Goldin was last seen in daytime playing Jesse Torres on “The Bold and the Beautiful” in 2013 and is most remembered for his “All My Children” (Jake Martin, 2008 to 2010) and “Guiding Light” (Gus Aitoro, 2001 to 2008) roles. Fans can see the actor flipping sheds (yes, sheds!) on The Design Network’s new reality series “Save our Shed.” Along with his co-host Michael Murray and their team of contractors, Goldin will help homeowners turn their eye-sore-of-a-shed into a beautiful addition to their property – all in 48 hours. View the preview below and visit The Design Network to watch episodes today. Goldin also played Dean Frame on “Another World” (1991 to 1992) and Gary Dawson on “The Young and the Restless” (1999 to 2000).

Rachel Melvin stars in The Rake.
Rachel Melvin played the role of Chelsea Brady on “Days of our Lives” from 2005 to 2009 and will appear in the upcoming feature film “The Rake.” Starring alongside Shenae Grimes (Sandra Brown’s “White Hot”) and Izabella Miko (“Chicago Fire”) the psychological horror-thriller surrounds three siblings who return to their hometown where their parents were murdered twenty years ago. As they look back on the past, they uncover a connection between the murders and a local urban legend. Tony Wash wrote and directed the film. Stay tuned for its release date. Melvin also appeared as Lizzy Raynes in MTV’s “Awkward” this year and will play Summer Sunshine in “Manson Girls.”

Sebastian Roché joins Luke Kleintank in The Man in the High Castle.
From daytime to primetime to film, “General Hospital’s” Sebastian Roché (Jerry Jacks, 2007 to 2015) has done it all. Next, the actor will be turning up in season two of Amazon’s online series “The Man in the High Castle.” Based on the Philip K. Dick novel, he’ll play a Nazi official named Martin Hausmann, who also happens to be Joe Blake’s (Luke Kleintank) estranged father. The former “Young and the Restless” actor Kleintank played Noah Newman from 2010 to 2011 and has been with the Amazon series since it premiered on January 15, 2015. The story details how the Nazis and Japanese rule America after losing World War II. Season two will consist of ten episodes. Stay tuned for its return date. Roché also played Peter Rogers on “Loving” in 1992 and Mikael Mikaelson on The Vampire Diaries (2011) and “The Originals” (2013 to 2015).

Amber Tamblyn pens Dark Sparkler.
“General Hospital” alum Amber Tamblyn (Emily Quartermaine, 1996 to 1998) released her latest poetry book, Dark Sparkler, on April 7 through Harper Perennial Publishing and is currently on a book tour. The collection gives readers a glimpse into the lives of several actresses (Marilyn Monroe, Frances Farmer, Dana Plato, Brittany Murphy and more) whose tragic stories ended in suicide, murder and other forms of death. Fans can order the book online or through various bookstores. The actress also wrote Bang Ditto and Free Stallion: Poems. Tamblyn has played Stephanie Daley on “The Increasingly Poor Decisions of Todd Margaret” since 2009, has appeared on “Inside Amy Schumer” and “Two and a Half Men” in recent years and starred as Tibby Tomko-Rollins in “The Sisterhood of the Traveling Pants” franchise.

Corbin Bernsen in Karen Kingsbury’s A Time to Dance.
Corbin Bernsen (“The Young and the Restless'” Father Todd Williams, 2004 to 2014) will appear alongside Jennie Garth (“90210”) and Dan Payne (“All Yours”) as Hallmark Movies & Mysteries presents Karen Kingsbury’s “A Time to Dance.” Based on the 2001 novel, the story follows a married couple Abby (Garth) and John (Payne) Reynolds, who were high school sweethearts, who have fallen out of love but appear to be the solid couple envied by their peers. However, deciding to wait until after their daughter’s wedding to announce their divorce, the time spent planning the event proves to be a second chance at love for the Reynolds. Look for Bernsen as Pops and tune in on Sunday May 15 at 9:00 PM for the premiere.

Sean Patrick Flanery releases novel, Jane Two.
Sean Patrick Flanery made his daytime debut in 2011 as Sam Gibson on “The Young and the Restless” and will always be remembered for his starring role as Jeremy ‘Powder’ Reed in the 1995 film “Powder.” He’s been very successful over the years, having had numerous film and primetime roles and played Jacob Elway in the popular Showtime series “Dexter.” Fans of Flanery will get to see a different side of him, as an author, in his debut novel Jane Two. The novel, released on April 5 by Center Street, is described as, “A young Mickey navigates through the dense Texas humidity of the 70s and out onto the porch every single time his Granddaddy calls him, where he’s presented with the heirloom recipe for life, love, and manhood. But all the logic and insight in the world cannot prepare him to operate correctly in the presence of a wonderfully beautiful little girl who moves in just behind his rear fence. How will this magical moment divide Mickey’s life into a ‘before and after’ and permanently change his motion and direct it down the unpaved road to which only a lucky few are granted access?” The novel can be purchased online or ask for it at your local bookstore. Follow @seanflanery on Twitter for upcoming book signings, where you’ll be able to meet the actor like this lucky fan.

Have a request? Please leave the actor’s name in the comments and we’ll look into their current goings-on.