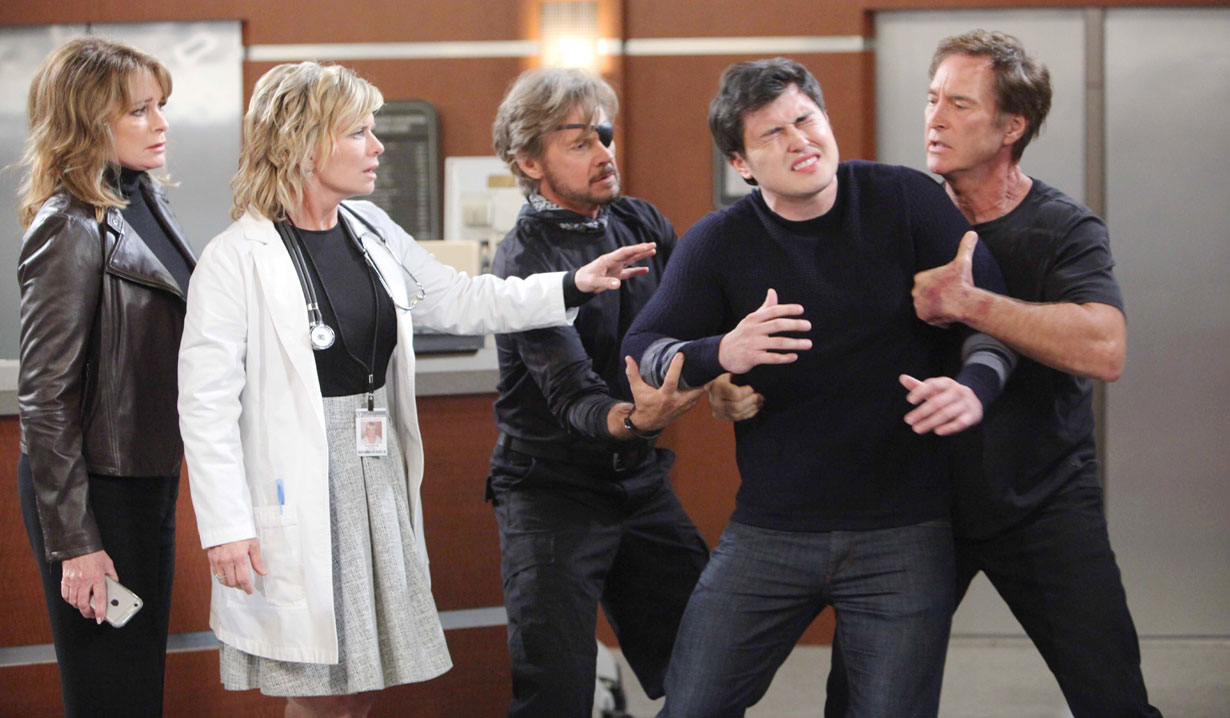 Thomas learned the baby’s name on “B&B.” Rafe’s mother, John and Paul were rescued on “Days.” A new doctor arrived in town on “GH,” and Billy and Phyllis shared a passionate kiss on “Y&R.”

Read Soaps.com’s episode highlights and daily soap opera recaps to get caught up on your favorite soap characters and their storylines from the past week. Also, get a rundown of the 2016 Daytime Emmy Nominees with Cathy Rankin in this week’s Soaps’ Roundup!

The Bold and the Beautiful:
Ridge told Thomas they named the baby Douglas, after Stephanie, and appeared uneasy as he presented his brother with a shirt that read ‘Like father, like son’. After Caroline, who felt guilty, allowed Thomas to hold Douglas, Ridge reminded her no one could ever learn the truth. Over at the cabin, Quinn couldn’t get the vision of pushing Deacon over the cliff out of her head. Liam sensed her upset, which she credited to fear of losing him, and vowed to never leave her. Elsewhere, Charlie came across footage of Liam arguing with Quinn then falling unconscious in the parking lot. It wasn’t long before Wyatt confronted Quinn and demanded to know Liam’s whereabouts. Sasha met up with Nicole, who confided how much she missed Zende. Nicole then learned from Zende that he was dating Sasha, who relayed the news to Julius and again threatened to reveal he was her father. While Sasha and Zende had sex, Nicole vented to Julius, who refused to get involved with her and Sasha’s issues. Read the Bold and the Beautiful daily recaps to hear about Rick’s determination to stop Ridge, who was confronted by his fertility doctor.

Days of our Lives:
Hope crashed Ciara’s birthday party and warned she had to face the rape. After Hope promised to stand by her, Ciara came face-to-face with Chase. At the station, Roman refused to arrest Joey for Ava’s murder, as Steve, Rafe and Marlena rescued John and Paul – but not before Ling brainwashed John’s son. John faced more devastation after Ling killed himself, as Rafe recognized his unconscious mother at Ling’s compound. Once everyone was safe at the hospital, Paul began hearing Ling’s voice in his head. Meanwhile, Eduardo faced backlash from his family and decided not to wait to be discharged in order to leave town. Having returned to Salem, Chad admitted to Abby that he and JJ lied about Ben’s whereabouts. Abby feared for their son and turned the shredded negligee over to JJ as evidence. Chad and JJ devised a plan to trap Ben and promised not to lie to Abby again. Read our Days of our Lives daily recaps to learn what Victor did after finding out Summer was Maggie’s daughter and how he reacted to Deimos’ request for an apology.

BREAKING! Daytime Emmy noms are in but ceremony will not be televised

General Hospital:
Dante was peeved to find Curtis and Valerie kissing, as Professor Parker arrived to check in on Kristina, which led to a kiss. After Nina hired Curtis to uncover who’d been sabotaging Crimson, he insisted Valerie be his assistant. Maxie, Carly, Olivia and Alexis took their shirts off in court to prove a point, leading a judge to rule in Olivia’s favor. Lomax, defeated, had no other choice but to back off. Over at the hospital, Tracy mistook Dillon for Ned then learned she didn’t have cancer. Believing her issues stemmed from a food born infection, Tracy recalled a meal with Ashton in Mexico and was referred to a new doctor, Dr. Finn. Monica convinced Obrecht to give Finn credentials to practice at GH, as Carly met the new doctor and his service lizard, Roxy. Lulu and Laura took the key Helena left her and unlocked an old trunk in Wyndemere’s attic. Read our General Hospital daily recaps for Nik’s reaction to what Hayden spotted in the painting Helena left him and how Liz confronted Hayden after uncovering her secret.

The Young and the Restless:
Phyllis was stuck at the Chancellor mansion with Billy and learned Jill gave him the property, due to all of the memories. During a sad moment of reflection, and after an accidental stumble, Phyllis and Billy kissed passionately. Ashley and Neville kissed as well after news came that his treatments were working. Luca visited Victor and reported that Michael planned to throw his case. Victor wasn’t receptive, turned Vikki’s offer to help away as well and claimed Adam was the only one he could count on. As family members prepared to testify against Victor, he asked Adam to run Newman and promised to plead guilty if he agreed. Adam shared the deal with the family, who objected, then turned Victor down. After Phyllis lashed out at Victor at the trial, and his family testified against him, Victor forced Michael to call Luca to the stand. Luca admitted Michael was deliberately throwing Victor’s case. Victor announced he’d serve as his own counsel then called himself to the stand. Read The Young and the Restless daily recaps to hear why Sharon’s nightmares implied that Sully didn’t exist.