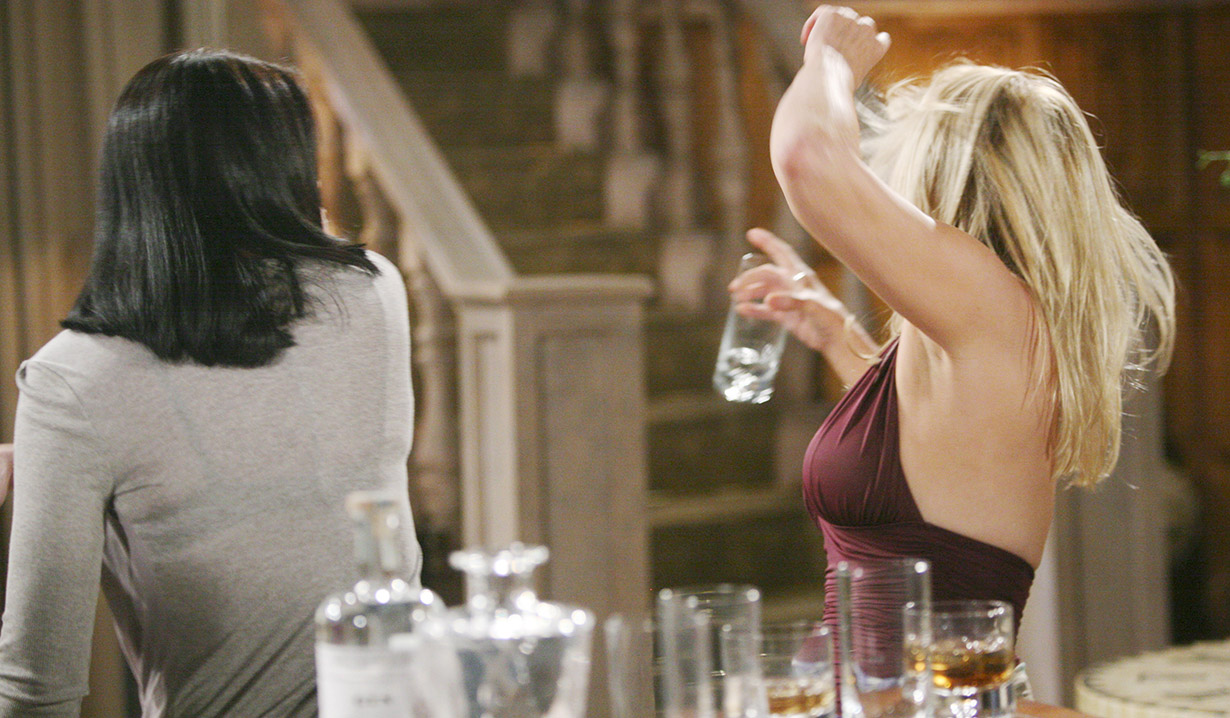 Honoring the primary patron saint of Ireland, St. Patrick, by donning our green t-shirts that read, “Kiss me, I’m Irish,” even if we’re not. Then we’re throwing on some beads, painting a giant four leaf clover on our faces and going to meet at The Brady’s Pub in Salem for a few pints of green beer. We’ll be reminded, as we look around, that we’re not the only boozehounds in the place. Imagine who we’d see at the bar on a first name basis with the tarbender…er bartender…

All My Children’s J.R. Chandler
Pine Valley’s bad boy, J.R. Chandler has struggled with family issues, romance and of course, the sauce. When it looked as though Babe ran off with Little Adam, J.R. felt betrayed. He started drinking and held Babe’s mom, Krystal, at gun point and demanded to know where her daughter and his kid were. J.R. and the hard stuff don’t mix! We remember another time when poor J.R. discovered his estranged mom, Dixie was alive. This prompted him to begin abusing hooch again. His relationship with Babe had its ups and downs to say the least and Babe had sex with Josh. Of course Josh rubbed it in a jealous J.R.’s face. Cue the alcohol and J.R. got wasted. When Bianca and Erica cornered him to talk, he jumped through a picture window and almost killed himself. Oh the stories we could tell but we’re going to move on…

Another World’s Felicia Gallant
Bay City’s resident celebrity Felicia Gallant was known for her wild romance novels, numerous husbands, and over-the-top eighties fashions. Felicia’s true love though was her childhood sweetheart Lucas Castiglione, who she was able to reunite with later in life. However, a shady past involving the mob and a jealous ex-lover did him in, leaving Felicia devastated. Felicia always liked her cocktails, but turned into a full-fledged vodka swigging alcoholic in the wake of Lucas’ death. She turned against her friends who tried to get her to stop, and even setting herself on fire while drunk didn’t deter her from her booze. It wasn’t until her and Lucas’ adoptive daughter Jenna went into early labor and suffered a miscarriage while with Felicia, who was too drunk to drive her daughter to the hospital, that she finally got sober. She had a few issues staying sober over the years, usually due to problems with men, but her best friend Cass Winthrop always kept her on the path. She became the town’s resident AA sponsor for others in trouble.

We dug up this old clip of the aftermath of Jenna’s miscarriage.

Bold and the Beautiful’s Brooke Logan Forrester
Though she’s usually in control of herself and more interested in a tall drink of water, namely Ridge, Deacon or Bill, Brookie had a brief love affair with alcohol when she returned from Milan to find that her son Rick’s wife, Caroline, was cheating on him with Brooke’s ex-husband Ridge, her ex-fiancé, Bill Spencer reunited with her sister, Katie, and to add insult to injury, her usual standby, her child’s father Deacon, was doing Quinn. As a woman who always has arm candy she found herself alone for the first time and fell into a bottle of expensive whiskey at the Forrester mansion. Drunk, she bitterly slurred at Stephanie’s portrait, “You were always right. I’m just the slut from the valley.” We’ll never forget that scene’s brilliance!

Bold and the Beautiful’s Katie Logan-Spencer
Another Logan has the taste for alcohol but before she took to the bottle, Katie, Brooke’s younger sister, criticized hubby Bill for his own drinking. Remember the time when he was sipping the firewater and she was bitching and he decided he would take a shot of liquor every time Katie said ‘no’ to him? Classic. When Bill became intoxicated and drove right into Brooke’s car Brooke took him into her home and cared for him. She called her sister and because Katie already suspected her husband and sister were hot for each other, Katie’s insecurities got the best of her and she raced over to her sister’s and let loose, accusing them of cheating and laughing at her expense. She had enough and told them to be together. When she ran off they took her up on her invitation and had some of the hottest soap sex we’ve seen. This, among other indiscretions, started Katie’s descent into the bottom of a bottle. With a heart condition, an existing predisposition for depression, and a wee son at home, Katie really should lay off tippling.

Days of our Lives’ Nicole Walker Layton Roberts Kiriakis DiMera
Nic Nic is sort of a reformed boozehound, having traded in her Dirty Martinis for a cup of coffee at Dario’s bar in Malibu. We like tipsy Nicole. We like sober Nicole. We miss tipsy Nicole. She tended to drink a lot when she lived at the DiMera mansion. In fact, she hasn’t been much of a drinker since. We remember the time in 2008 that EJ and Nicole were drinking shooters at Chez Rouge and dancing. Both drunk, they were flirting and sucking lime from between each other’s lips. Is it getting hot in here?

General Hospital’s A.J. Quartermaine
A troublesome teen, it was no surprise when A. J. wound up in jail for drunk driving. When Grandma Lila heard the news, she promised to give him his inheritance if he could prove that he could stay out of trouble for six months. He was doing well until he fell in love with Nikki Langton and was tricked into proposing marriage to her. She wanted the Q fortune but when A.J. figured it out, he left her at the altar and resumed his love affair with alcohol. He hit the bottle pretty hard when he decided to try to win Nikki back a year later and learned she was married to someone else. Ouch. After that he slipped deeper into the drink and the misfortunes piled up with him drinking and driving again and having drunken one-night stands.

One Life to Live’s Roxanne Balsom
Roxanne Balsom wasn’t always the greatest mother, having lost custody of Rex at a young age and spending more money on booze than providing a proper home-life for Natalie. Annoying to some, hilarious to many, Roxy never failed as a friend or a mother to her kids in later years. Her idea of fun was knocking back the booze, any booze, and she had more slurred-up one-liners than David Vickers! When she walked into Rodi’s Bar, if someone was down in the dumps, like the often brooding John McBain, Roxy had no problem offering to help them drink away their problems with shot upon shot of whiskey. If someone was celebrating their last night being single, Roxy was the one to call for more booze – and the stripper!

Passions’ Julian Crane
We move on to Harmony’s drunken philanderer, Julian Crane. There were two instances that come to mind when we think of drunken Julian. Like the time Theresa tried to get Julian to reinstate Ethan as the Crane heir. Julian played along with the plan and got Theresa so drunk that they woke up the next morning married! On a sad note, Julian was deeply saddened to hear of Timmy’s death and when he paid his condolences to Tabitha, who let on that she was Timmy’s great-aunt, they shared a batch of Martimmys and had a wild drunken sexcapade.

To honor Passions and Timmy, here’s the Martimmy’s recipe.

Y&R’s Neil Winters
Neil battled with alcoholism and was doing well until his BFF Ryan McNeil was murdered and he found out that his brother Malcolm was presumed dead. He turned to his old amber pal and drowned his sorrows. He almost lost his family and career until he pulled it together. Over the years he kept things under control until his son Devon and his fiancée Hilary had an affair. That’d drive anyone to the drink. Neil’s a pathetic drunk. He usually becomes surly and falls down. That’s no fun. We wouldn’t sit beside him at the Brady’s Pub if he was having a nip. Course, he’d be sitting on the floor…

Y&R’s Nikki Reed Newman
Neil’s sometime partner in crime, Nikki can be so much freaking fun when she’s drunk that we confess we often look forward to her drunken bouts, at least the ones that don’t harm anyone. So many fond memories…In 2014 Nikki was so stressed out about Victor’s dealings with Ian Ward that she turned to her old pal, Grey Goose, for comfort. It wasn’t until 2015 that an intervention was sought and suddenly, it wasn’t fun! Nikki passed out drunk at her granddaughter Katie’s Christening. When they woke her up to take family photos, she almost dropped the baby on her head. Oops. Okay that wasn’t the typical fun party Nikki but it was memorable! During Victor’s stand alone episode when he considered what life might be like for his family if he wasn’t around Nikki had taken to pan handling to scrounge up enough money to buy a bottle. It was miserable and we hope it never gets to this!