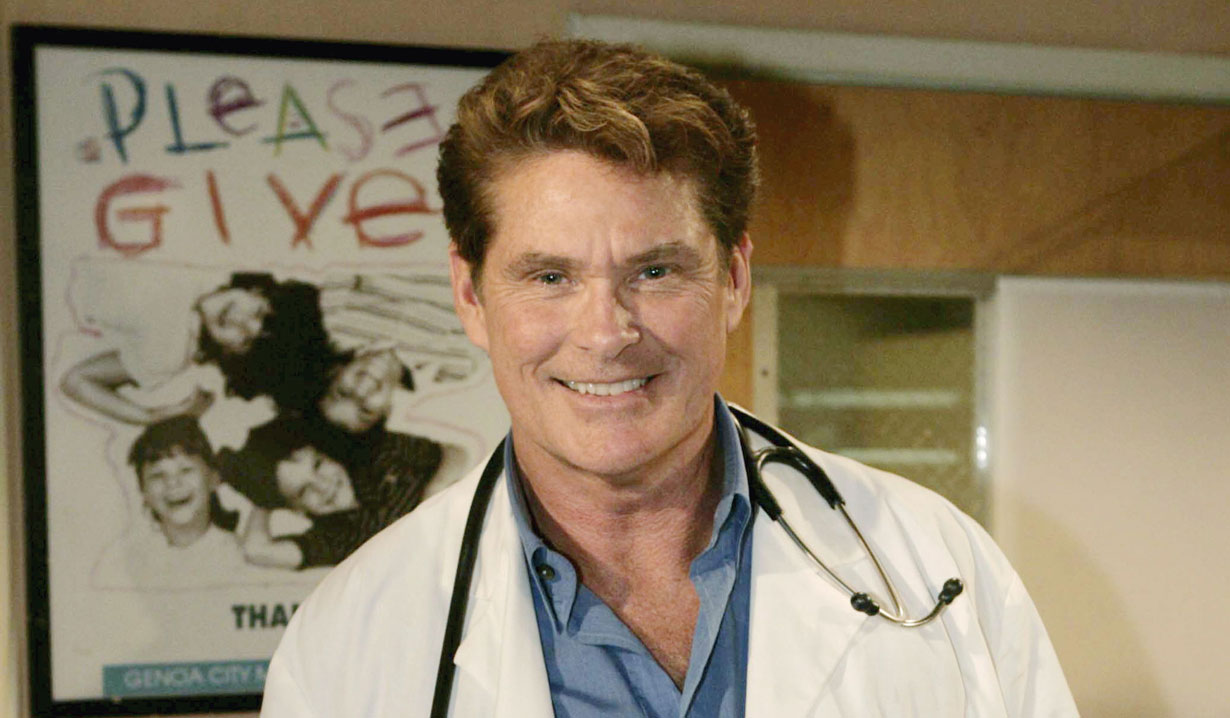 It wouldn’t be the same without The Hoff.

Soaps.com has uncovered some new celebrity homes for sale, primetime roles and more in this week’s column featuring “The Bold and the Beautiful,” “Days of our Lives,” “General Hospital” and “The Young and the Restless” alums.

Adrienne Frantz’s Studio City Spanish-style home is on the market.
“The Bold and the Beautiful” and “The Young and the Restless” alum Adrienne Frantz recently became a new mom and now she’s selling her Studio City Spanish-style home. The 1925 four-bedroom 5,150 square-foot home features everything from secret passageways, amazing views, a gym with a climbing wall to a remodeled kitchen, a master spa with a double rain shower and so much more! View photos of Adrienne Frantz’s home, which is located on a private lot just off Ventura Boulevard and is listed at $3.28 million dollars.

Frantz also turned up at this year’s Oscars on February 28 and tweeted out a photo:

For sale: Ashley Benson’s Hollywood Hill’s home.
Another former daytime actress is selling her home. Pretty Little Liars’ Ashley Benson (Hanna, “Days of our Lives'” ex-Abby Deveraux, 2004 to 2007) has hired Hilton & Hyland to list her 3,085 square-foot three-bedroom home, featuring three and a half bathrooms, a wood paneled library, an updated kitchen and a pool/spa area. Visit TMZ for a photo gallery of Ashley Benson’s home, which is located above the Sunset Strip and is listed at $2,995,000 million dollars. Fun fact! In 2002, Benson appeared in a Salon Surprise Barbie commercial and recently posted a throwback photo of her younger self:

Marsha Thomason lands leading role in FOX’s Zoobiquity.
“General Hospital” alum Marsha Thomason (Gillian Carlyle, 2009) has recently been seen as Katy “Safe House” and as Diana Barrigan on “White Collar” and has been cast in the female leading role on FOX’s medical procedural pilot “Zoobiquity.” Written and executively produced by Stephen Nathan and Jonathan Collier (“Bones”), the project is based off the book of the same name by Barbara Natterson-Horowitz and Kathryn Bowers and surrounds Boston Hospital cardiologist Dr. Kara Martins (Thomason), who along with a veterinarian explores the aspects of cross-species medicine. Antonia Bernath (“Downton Abbey”) has also been cast as Dr. Susan Gibbs.

The Rock confirms David Hasselhoff’s Baywatch return.
If you haven’t heard, the latest reboot hitting your television screens will be based on the 1989 to 2001 action drama “Baywatch,” which starred “The Young and the Restless'” David Hasselhoff (Dr. William ‘Snapper’ Foster, on and off from 1980 to 2010) as Mitch Buchannon. Though the 2017 reboot will star Dwayne ‘The Rock’ Johnson in Hasselhoff’s original role as Mitch, the actor posted a video to confirm that ‘The Hoff’ will indeed return to guest-star in the upcoming series in a different role. Watch the announcement below and stay tuned for future details. “Baywatch” will also star heartthrob Zac Efron as Matt Brody. Hasselhoff was married to Catherine Hickland (“One Life to Live’s” Lindsay Rappaport) from March 1984 to March 1989. From the soaps vault: Daytime alum Billy Warlock played Eddie Kramer on “Baywatch” from 1989 to 1992 and went on to appear in the spinoff “Baywatch Nights” and the movie “Baywatch: Hawaiian Wedding” in 2003. Warlock’s soap credits include “Capitol” (Ricky Driscoll, 1984), “General Hospital” (A.J. Quartermaine, 1997 to 2003), “Days of our Lives” (Frankie Brady, 1986 to 2007), “The Young and the Restless” (Ben Hollander, 2007 to 2008), “As the World Turns” (Anthony Blackthorn, 2010) and “One Life to Live” (Ross Rayburn, 2010).

"I WAS BORN READY!" Pleasure to officially welcome the original #BAYWATCH gangsta himself David Hasselhoff to our movie! #BAYWATCH is the most successful TV show of all time and from the day we announced we were turning it into a movie, "The Hoff" has been our greatest supporter. Especially once he knew our RATED R movie was going to be a combination of AVENGERS meets ANCHORMAN….???Hoff's a cool dude who's down to have fun and here's the best part.. He's been training his ass off and gotten in the best shape he's been in in years! (cue slo-mo running and glistening chest hair.. wait, why the f*ck am I even thinking about Hoff's chest hair!?) World get ready.. #RockAndHoff #ThereAintNoBay #WithoutTheHoff ???

As always, leave us a comment if there is a past favorite you’d like to hear about.