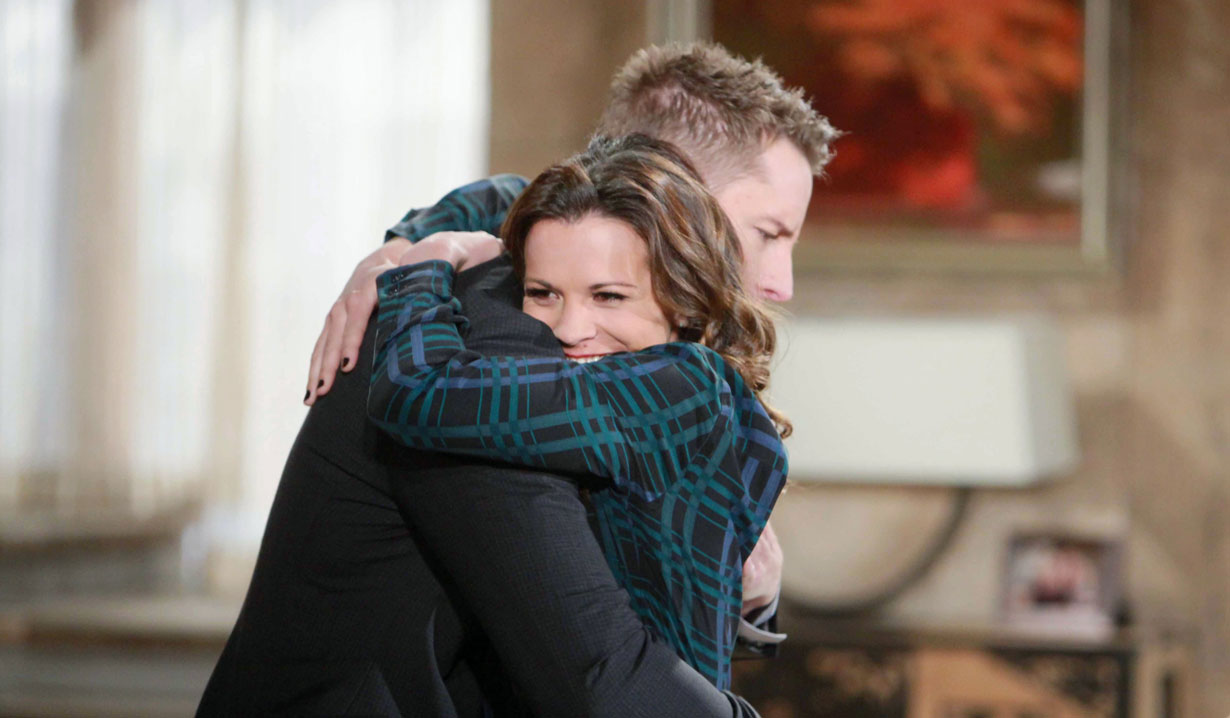 Letting go of the past.

Caroline gave birth to Thomas’ baby on “B&B.” Marlena and Arianna were kidnapped on “Days.” Hayden caught Sam with Corbin on “GH,” and Elise Moxley went public with her and Victor’s affair on “Y&R.”

It’s time to get caught up on the past week’s storylines through Soaps.com’s episode highlights and daily soap opera recaps. Watch the Soaps Roundup with Cathy Rankin!

The Bold and the Beautiful:
Caroline went into labor with Thomas by her side. Once Ridge arrived at the mansion, following an argument with Rick over power, he prevented Thomas from being present for the birth. Family waited downstairs until word came that Caroline had given birth. Though Ridge allowed Eric and Steffy to visit with Caroline and the baby, he made Thomas suspicious by turning him away. Caroline warned they couldn’t keep Thomas away forever, leading Ridge to invite Thomas to meet the baby. Thomas gushed about being the best brother ever and never realized he’d been admiring his own son. Elsewhere, Brooke revealed to Rick that Caroline’s baby had been a miracle, considering Ridge had a vasectomy but had since had it reversed – even though his doctor claimed he wouldn’t be able to father another child. Read the Bold and the Beautiful daily recaps to learn how Liam reacted to the doctored photos of his and Quinn’s wedding day, as well as coming face-to-face with Deacon.

Days of our Lives:
Summer’s DNA test proved she was Maggie’s daughter. Elsewhere, Deimos handed over the serum to Petrov, as Victor seethed at Philip for giving it to him. The father of the woman found dead in Philip’s hotel room punched him in the park. Deimos came to Philip’s rescue and hired him to work against Victor. Eduardo visited John and warned that Petrov could be alive and was connected to Deimos, who’d had sex with Kate. After Marlena and Arianna were kidnapped, John and Eduardo received a photo of the girls with orders from the kidnappers and alerted Rafe. Eduardo then admitted he’d been a trained and brainwashed assassin. John and Eduardo arrived at the location, where mysterious drinks were forced upon them, Marlena and Arianna were released, Eduardo was shot and John was kidnapped and introduced to his father! Claire, Theo, and Joey dragged Chase to a warehouse. Ciara lashed out her rapist and called Hope. As Chase was arrested, Abby walked down the aisle to marry Chad and screamed in fear at the sight of Ben. Read our Days of our Lives daily recaps for Steve and Kayla’s reaction to a very disturbing scene.

General Hospital:
Tracy learned she had a large mass on her brain and pushed Monica away. Dillon rushed her back to the hospital after another seizure but couldn’t get any answers as to what was wrong with his mother. Sam met Corbin at the Metro Court and pushed for information by pretending to know ‘Rachel’. Though Nik called off the investigation, in an attempt to trust Hayden, Liz shared her suspicions with Sam and urged her to continue without Nik’s approval. While Dante and Lulu reestablished their love at home, Sonny and Carly did the same, despite the recent violence in their lives. Carly then showed Jason around the Quartermaine crypt, where he recalled something from his past. As Carly expressed her pleasure that Sonny had left the mob, Sonny met with Anna and agreed to help track Carlos in order to make Julian pay. He then told Michael that Carlos was alive and Sabrina and the baby were with him. Read our General Hospital daily recaps to hear what Jordan admitted to Andre about her past with Curtis.

The Young and the Restless:
Elise Moxley was assigned to Victor’s case but went public with their past affair to be removed from it. As Summer admitted to Victor that Billy, Phyllis and Natalie had been working against him, Victoria confronted Billy and called off the wedding. She also called a board meeting and had Victor terminated from Newman. All the while, Phyllis asked Michael to take Victor’s case and throw it. After Lauren sided with Phyllis, Michael offered his services to Victor. Elsewhere, Max admitted Stitch hadn’t hurt him but Abby still feared Max’s outbursts would cause issues. As Abby chased after Max, who blamed her for his mom’s death, she doubled over in pain but was later deemed okay after Max called 911. At the lab, Neil warned Devon that Hilary had been acting like her old vindictive self. Hilary had a warning too and told Neville not to let his feelings for Ashley distract him from getting the job done. Read The Young and the Restless daily recaps to find out why Sage lashed out at Nick and what had Adam and Chelsea celebrating.