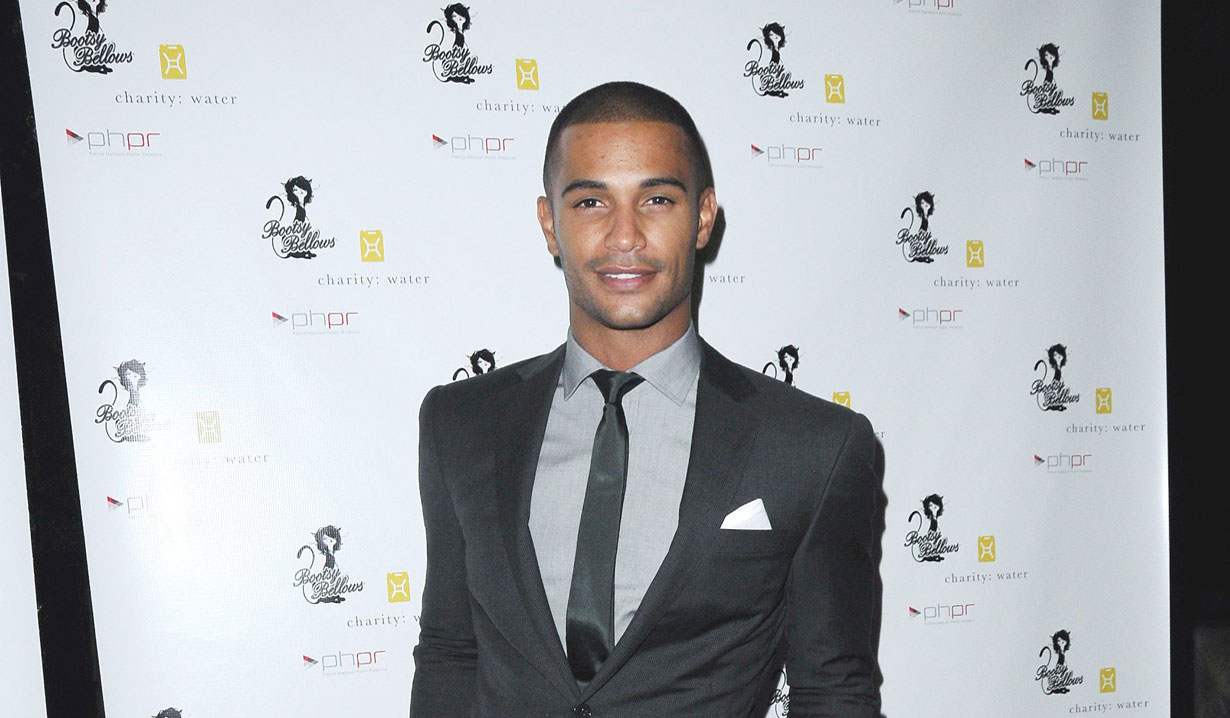 Turning up here and there.

“The Bold and the Beautiful,” “Days of our Lives,” “General Hospital” and “The Young and the Restless” alums are turning up all over the place. In this week’s column, Soaps.com has uncovered new film and primetime roles, a web series, fun facts and more.

Adam Gregory in The Veil.
Adam Gregory played the role of Thomas Forrester on “The Bold and the Beautiful” from 2010 to 2014 and will appear in the upcoming American post-apocalyptic film “The Veil.” The actor recently taped some final shots for the film as Warrior’s father. The premise is set in a war-torn land where a deadly warrior leads a destructive war and later finds himself betrayed by his own. After a mysterious princess heals him, it becomes clear many believe he was meant to lead a final battle. Stay tuned for its 2016 release date.

Mackenzie Mauzy stars in Charles Manson-themed movie, Mason’s Lost Girls.
“The Bold and the Beautiful” alum Mackenzie Mauzy (Phoebe Forrester, 2006 to 2008) has completed work on “Mason’s Lost Girls,” which was green-lighted by Lifetime last year. The original movie surrounds the girls who fell under Charles Manson’s spell, which resulted in various 1960s murders. Mauzy’s character Linda Kasabian will be a main focus from the time she first came in contact with ‘the family’ to all of the criminal activity that followed, including the murder of Sharon Tate. Jeff Ward (“The Mentalist”) will play Charles Manson. Tune in for its world Lifetime premiere on Saturday February 6 at 8:00 PM. Mauzy also played Lizzie Spaulding on “Guiding Light” from 2002 to 2003.

Jade Harlow stars in Denton Harbor, based on a real-life tragedy.
Jade Harlow (“Days of our Lives'” Sheryl Connors, 2014) will star in “Denton Harbor,” a film produced and directed by Arthur Egeli and inspired by one of the sub-plots of the Christa Worthington murder of 2002. The victim was found murdered in her home after her two and a half year old child was alone with the body for two days. The former soap actress will appear as the Worthington resembled character, real names have been changed, with Chris Lazzaro (“Days of our Lives'” drug dealer, 2013, “Blue Bloods”) as the murder suspect. The film was shot in Provincetown, Massachusetts with hopes for a summer release. Harlow also played Jessica Bennett on “Passions” in 1999 and Lianna Ramos on “The Bay” from 2010 to 2015.

Jim Beaver returns to Supernatural.
Jim Beaver played the role of Father Timothy Jansen on and off on “Days of our Lives” from 1996 to 2004, as well as Leo Sylvestri and Detective Jim McCastor on “The Young and the Restless” (1985 to 2000) and as a rapist named Andy on “Santa Barbara” from 1991 to 1992. He also became a fan favorite on the CW’s “Supernatural” as the Winchester brothers’ father-figure Bobby Singer from 2006 to 2015 and will be reprising the role through flashbacks during Episode 16. Tune in on Wednesdays at 9:00 PM during the next couple of weeks for Beaver’s appearance.

Mila Kunis set to co-executively produce Freeform fashion comedy.
Daytime trivia! Did you know actress Mila Kunis appeared on “Days of our Lives” when she was ten years old? She played a young Hope in a scene on June 29, 1994 where Bo was recalling one of his fondest memories of having an argument with a stubborn, young Hope who ended up giving him a peck on the cheek. Since then, she’s gone on to appear in numerous primetime and film roles, most notably as Jackie Burkhart on “That ’70s Show” (1998 to 2006) and has contributed her voice to “Robot Chicken” from 2005 to 2011 as well as on “Family Guy” since 1999. Next, Kunis will join Josh Schwartz and Stephanie Savage (“Gossip Girl”) as executive producers in a new Freeform (formally ABC Family) comedy surrounding friendship and fashion, based on the 2014 memoir by Pamela Skaist-Levy and Gela Nash-Taylor (Juicy Couture founders) The Glitter Plan. Stay tuned for its premiere. The actress is married to former “That ’70s Show” co-star Ashton Kutcher (Michael Kelso, 1998 to 2006), who she shares a daughter, Wyatt Isabelle, with.

Nathan Owens returns to Devious Maids as series regular.
Former “Days of our Lives” actor Nathan Owens plays Jesse Morgan on Devious Maids, a role he begin recurring in back in June 2015. Good news for fans of his character… Viewers will get to see a lot more of him on Lifetime in the upcoming season four, as Owens has been promoted to a series regular. Stay tuned for the spring return to see what’s ahead for Jesse and whether or not he’ll have a solid future with Marisol (Ana Ortiz). The actor played “DOOL’s” Cameron Davis (2012 to 2013) prior to his primetime role.

Andrea Bogart cast in Snowfall.
Back in September 2015 Soaps.com reported that “Days of our Lives'” (Gabi) Camila Banus will play Lucia Villanueva in Snowfall, as will “As the World Turns'” actor Billy Magnussen. Another former soap star will take part in the FX pilot as well. Andrea Bogart will play the role of Mrs. Volpe in the story of crack cocaine epidemic’s impact on today’s culture. As of yet, there is no word on if the show has been picked up for series but reports claim there’s a good chance we could hear some promising news very soon. Prior to her role as “General Hospital’s” Abby Haver (2010 to 2011), Bogart played Margo Harrison on “Days of our Lives” (2002). Most recently she’s appeared in “The Odd Couple,” “Ray Donavan” and “CSI” and voiced Linda-058 in 2015’s “Halo 5: Guardians” videogame.

Annie Wersching guest-stars on Code Black.
Annie Wersching played Amelia Joffe, who was set on revenge against Sam McCall for the death of her father, on “General Hospital” in 2007. Currently she’s most recognized for her role as Lily Salvatore on “The Vampire Diaries” and will next turn up on CBS’ medical drama “Code Black.” Wersching will play Katie in the Wednesday February 10 episode titled “Hail Mary,” where the reappearance of Neal’s (Raza Jaffrey) ex-girlfriend makes Christina (Bonnie Somerville) insecure and New York Giants Pro Bowl wide receiver Odell Beckham Jr. makes a pitch to his stubborn high school football coach, Pete Delaney (Beau Bridges), to have life-saving surgery. Tune in at 9:00 PM.

Eva Longoria goes in front of the camera on Devious Maids.
In other ‘devious’ news… Eva Longoria (“The Young and the Restless'” Isabella Braña, 2001 to 2003; Brenda Barrett fill-in on “General Hospital,” 2000) has been an executive producer on Lifetime’s “Devious Maids” since 2013 and will appear in a guest-starring role during season four. The role is being kept hush-hush but Longoria’s former “Desperate Housewives” co-star James Denton (Hallmark Channel’s “Good Witch” series) will recur as a movie studio head named James. Don’t forget, you can currently catch Longoria in NBC’s Telenovela Mondays at 8:30 PM.

Meredith Baxter stars in new digital series, Skirtchasers.
Meredith Baxter is best known for her roles as Elyse Keaton on the 80s sitcom “Family Ties.” In 2014 she had a guest arc as Maureen Russell on “The Young and the Restless,” who turned out to be the mother of Ben ‘Stitch’ Rayburn and Kelly Andrews. The actress recently finished filming scenes in Los Angeles for an upcoming digital series titled “Skirtchasers.” The web series will consist of five parts and follows Elizabeth Keener (“The L Word”) as Robyn Samuels, Meredith Baxter as her divorced mom Lilah and Barry Bostwick (“Inside the Extras Studio”) as Robyn’s estranged father. Viewers will be taken on Robyn’s journey from her huge breakup with her girlfriend a mere day before their wedding to the impact her parents’ divorce had on her life. Clementine Ford (“The Young and the Restless'” Mackenzie Browning, 2009 to 2010) also stars. Keep an eye out for the web series this spring on Tello Premium.

Soaps.com also located some new projects for former actors of the canceled soaps, including Tom Pelphrey in Hear My Heart , many primetime appearances and more!

Do you have favorites we haven’t reported on? First be sure by searching the actor’s name on the site then leave us a comment if you can’t find who you’re looking for.