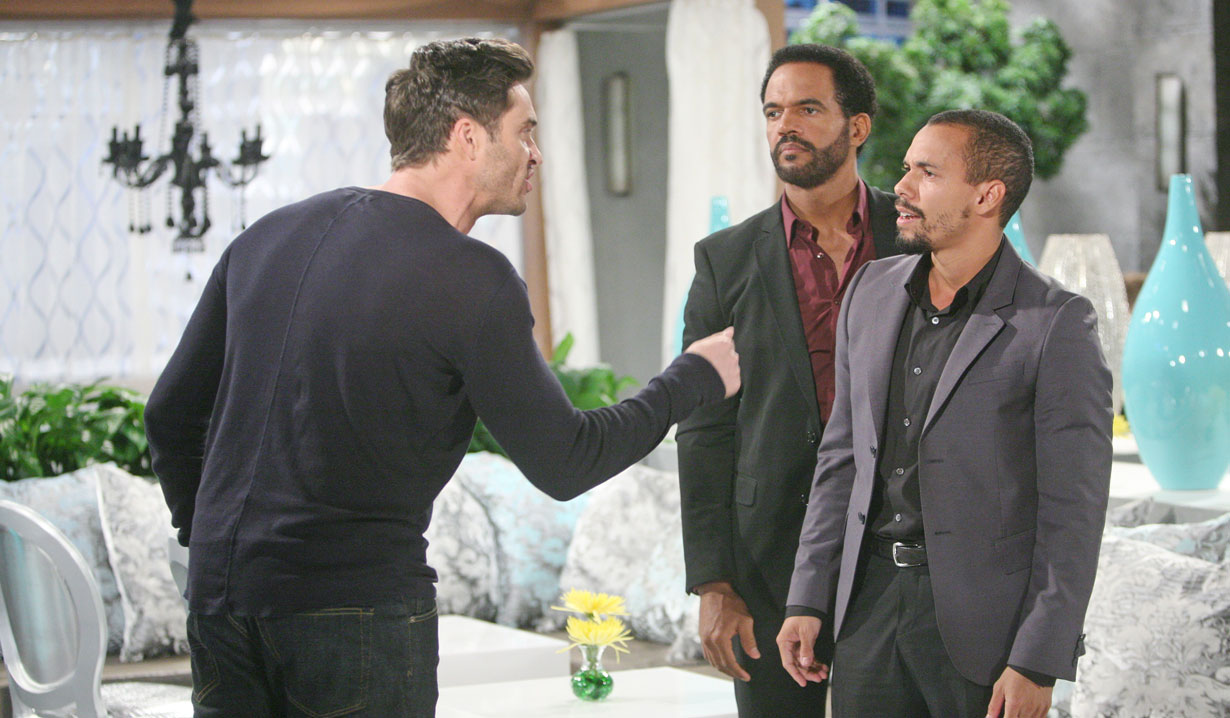 “You actually think that I did this?” – Cane Ashby

Ridge and Caroline were put on the spot on “B&B.” Patch found Bo on “Days.” Michael learned Sabrina was pregnant on “GH,” and Cane was arrested on “Y&R.”

Grab a cup of coffee and get a refresher on last week’s soaps through our episode highlights and in-depth daily soap opera recaps.

The Bold and the Beautiful:
Ivy stiffened up at her first photo shoot, leading Liam and Wyatt to insist that Steffy and Ivy call a truce. The girls bonded while rehashing all that had taken place since Aly’s death and vowed to put the past behind them and act like family. Elsewhere, Caroline rushed off to be sick, leaving Liam, Charlie and Pam to suspect she was pregnant. When Ridge appeared, they hounded him until he admitted Caroline was expecting. Though he asked them to stay quiet, Liam told Steffy and Pam blabbed to Brooke. Brooke privately confronted Ridge and demanded to know whose baby Caroline was carrying. Ridge finally convinced Brooke that he had a successful vasectomy. Though she congratulated Caroline, she questioned her about Ridge abruptly sending Thomas to Paris. Thomas soon returned to wrap things up in LA and learned about the pregnancy. Read the Bold and the Beautiful daily recaps to find out how Zende, Julius and Vivienne reacted to Nicole agreeing to be Rick and Maya’s surrogate.

Days of our Lives:
Caroline gave Steve another clue in order to find Bo prior to learning about Will’s murder, as many gathered for his funeral. Though Ben refused Abby’s request to speak on her behalf, family and friends said their final goodbyes to Will. When Andre appeared at the reception, claiming to want a fresh start, Roman punched him. Sonny said goodbye to Salem, as Gabi learned from Rafe that Eddie was their father. Elsewhere, Andre demanded Aiden repay his debt, threatened Chase and suggested he kill Hope for the insurance money. Aiden realized he had no other choice but to kill the woman he loved, and fanaticized doing so, in order to protect his son. While Bo and Hope’s son Shawn returned, Steve followed Caroline’s clue and came face to face with Bo. Ben was escorted by police to say goodbye to Clyde, who was being extradited to Florida, and admitted to his father that he was the Necktie Killer. Read our Days of our Lives daily recaps to hear who Lani asked out on a date.

General Hospital:
Ned broke up with Olivia, due to the lies surrounding Leo’s paternity. Elsewhere, Michael was happy about Sabrina’s pregnancy, as Alexis received DNA results she’d had done on Olivia’s baby and learned Julian was the father. She told Julian the truth and he confronted Olivia. Julian promised he was out of the mob and expressed wanting to be there for their son. Olivia allowed Julian to hold Leo. In exchange for Brad doing the DNA test for Alexis, she agreed to give him legal counsel in regards to his marriage and the felony he committed. Jake attacked Nik at Wyndemere but Nik claimed he had no idea who Jake was. Later, Spinelli uncovered that Nik deleted a file on Jake then hacked into Jake’s hospital records. While Lulu became suspicious of the tension between Nik and Laura, especially when Laura refused to attend Liz’s bridal shower, Sonny learned he may never walk again. Read our General Hospital daily recaps for details on what happened after Anna asked to see Carlos’ body.

The Young and the Restless:
Fenmore’s lost millions and all fingers pointed to Cane, who was arrested for extortion after Hilary’s ransom money was found in his gym bag. Cane was furious when those closest to him questioned his innocence. Elsewhere, after Victor agreed to help Adam flee, he professed his love to Chelsea, as she did to him, and they made love. Chelsea begged Adam not to run. Adam appeared for his trial, took the stand and profusely apologized to Chelsea and Billy. After Connor ran off during a recess, Billy found him. Chelsea acknowledged if something would’ve happened, she’d have been to blame for being distracted and not watching Connor. Billy recalled leaving Delia in the car and later took the stand – and the blame for her death. Though Adam was found guilty and sentenced to ten years in prison, someone ran him down with a car as he was escorted to a police van. Read The Young and the Restless daily recaps to hear why Sharon knocked Patty out cold.