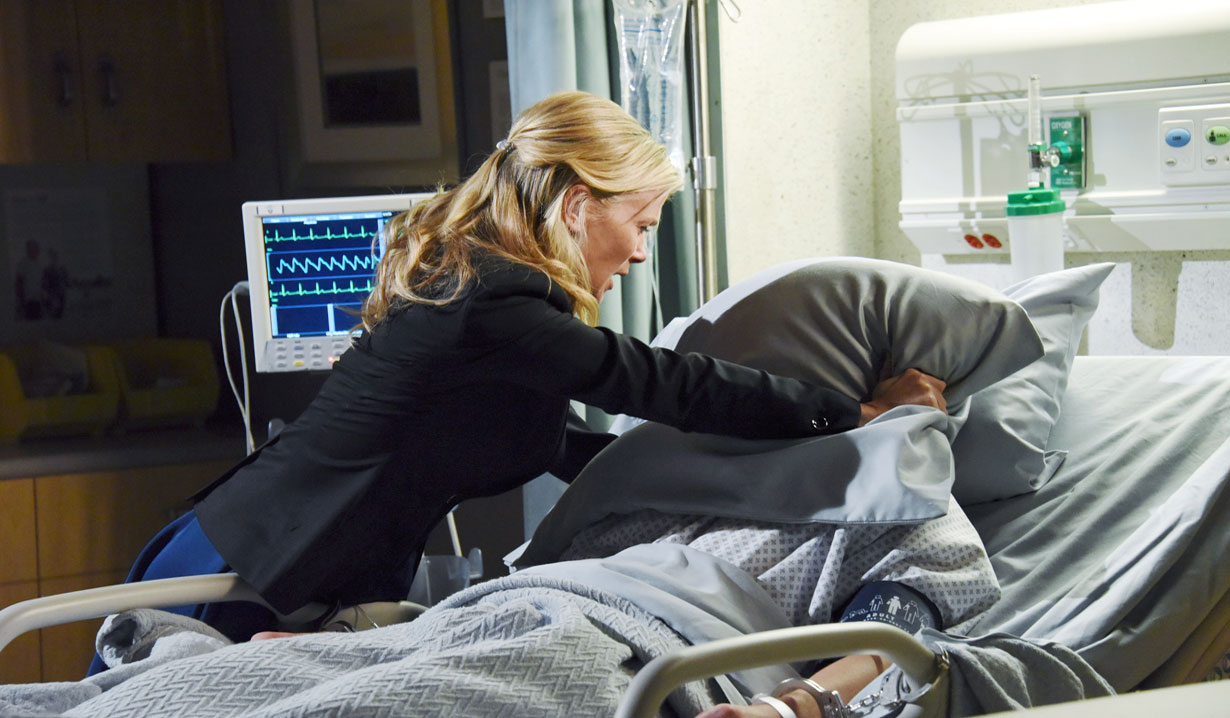 Nicole struggled with a decision on “B&B.” Sami and Sonny returned to Salem filled with grief on “Days.” Hayden continued to jerk Nik’s chain on “GH,” and Chloe appeared at Delia’s memorial on “Y&R.”

Don’t miss a beat of what happened last week as Soaps.com gives a quick rundown through the soaps’ biggest moments and offers detailed daily soap opera recaps of everything in-between.

Watch Soaps’ Roundup with Cathy Rankin once again as she dishes on the highlights of what went down in all the soaps last week!

The Bold and the Beautiful:
Zende was stunned to learn Rick and Maya wanted Nicole to be their surrogate. Though Zende begged her not to do it, Nicole told Maya she hadn’t ruled out the possibility. However, a fertility specialist warned Maya and Rick using a family member as a surrogate wasn’t wise. In the end, Nicole decided to make the ultimate sacrifice for Rick and Maya. Elsewhere, Bill was impressed by Steffy’s assignment for Ivy, as Katie worried it would make Ivy uncomfortable. Liam sided with Katie and accused Steffy of bullying Ivy. Over at the beach house, Wyatt urged Ivy to get comfortable in her skin, which led to her answering the door in lingerie and giving a pizza delivery guy quite the eyeful. Feeling more confident, Ivy vowed to embrace her new position at Forrester and not let Steffy get the best of her. Read the Bold and the Beautiful daily recaps to find out how Caroline reacted to hearing Brooke knew of Ridge’s vasectomy.

Days of our Lives:
Caroline shared her visions with Steve and urged him to find Bo. Sonny and Sami learned of Will’s murder and returned to Salem. As family and friends grieved Will’s death, Chad realized Ben was the Necktie Killer and confronted him. The men fought, which led to Ben smashing Chad’s head in. Abby appeared and Ben claimed Chad tried to kill him. Rafe questioned Ben, unbeknownst that he was the killer. Sami and Lucas said goodbye to Will in the morgue, as an unconscious Chad was admitted to the hospital. Marlena didn’t believe Chad was the killer and later stopped Sami from suffocating him. She brought Sami home, where a letter was waiting from EJ. Elsewhere, Eddie informed Eve he’d be staying in Salem, as Paul bonded with John over his father’s past. Later, Paul found Sonny devastated at the site of Will’s murder. Read our Days of our Lives daily recaps to hear what Aiden contemplated in order to get out from under the DiMeras and what advice Anne gave Theresa regarding Kate and Nicole.

General Hospital:
Kiki got into a fight with Ava and was arrested for trashing The Floating Rib. Over at The Haunted Star, Lulu professed her love for Dante to Dillon, who hinted to what happened between Dante and Valerie. Dante warned Dillon away from his wife. After Dillon privately told Dante he was aware of his affair with Valerie, Dante learned Lulu would be able to carry their next baby. Dillon and Maxie found Carlos’ body at the docks, and Paul relayed the news to Anna. Julian met Alexis at the Metro Court and discussed Olivia’s adoption. Olivia appeared and briefly chatted with Alexis, never realizing Alexis pocketed something Olivia had left behind. All the while, Sabrina confided in Felix that she was pregnant. After Sam and Jake escaped Wyndemere unseen, Spinelli helped them get a hit on Jake Doe in Nik’s stolen computer files. Hayden toyed with Nik about having memory flashes before Liz accused her of faking amnesia. Read our General Hospital daily recaps for details on Sonny and Carly’s hospital wedding.

The Young and the Restless:
Jack and Phyllis watched Victor shake a judge’s hand, which led to Adam making bail and remanded to Victor’s custody. Many gathered at Chancellor Park to plant a tree on the anniversary of Delia’s death. Just as Adam appeared, Chloe made her presence known and aimed a gun at him. Chelsea talked her down then insisted to Adam things were over. Victor warned Adam to stop the Paragon virus or be sent back to jail. Billy then heard Chloe asking someone via phone if they could keep ‘her’ for another day. Dr. Neville met Gwen and Neil at the boathouse and agreed to treat Hilary – on his terms. Later, Lily found Devon’s ransom money at home in Cane’s bag and took the evidence to show her brother. Over at Fairview, Dr. Anderson continued to drug Sharon, as Patty tried her best to alert someone to help her. Read The Young and the Restless daily recaps to hear how Luca forced Marisa to stay with him in order to save her daughter.