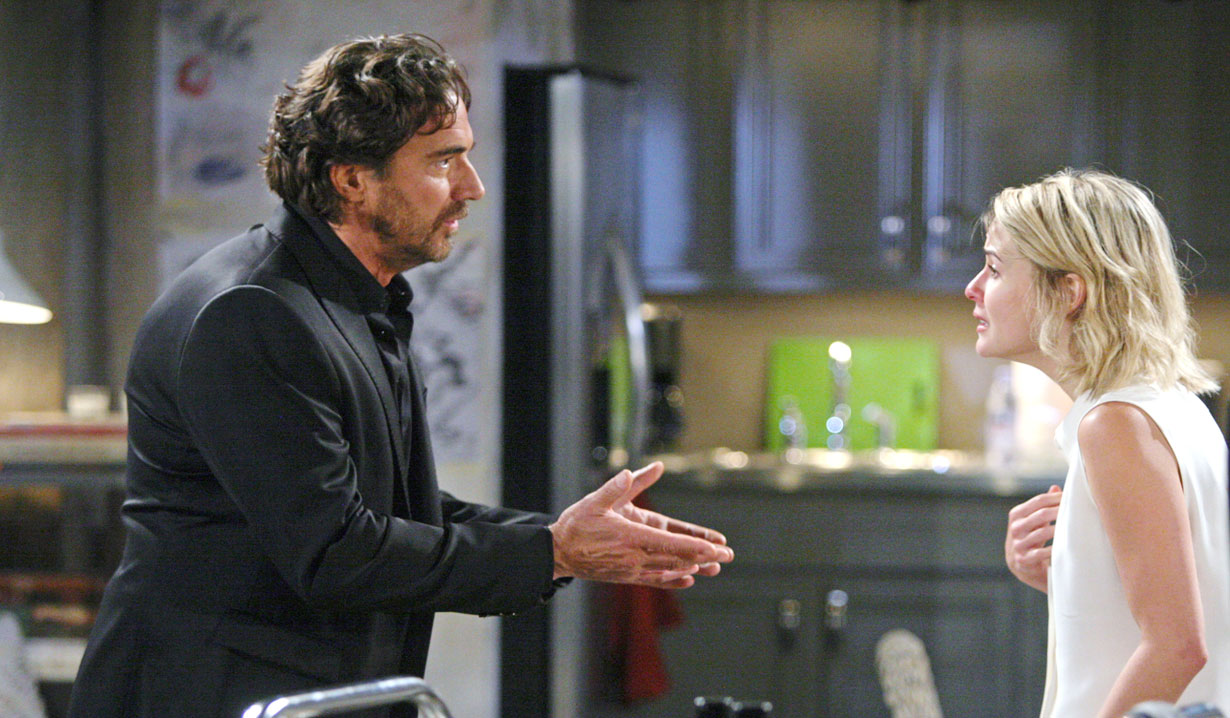 “He’s the father of my baby!” – Caroline Spencer

Ridge wanted to raise Caroline and Thomas’ baby as their own on “B&B.” Bo refused to give up information, as The Necktie Killer took his next victim on “Days.” Laura returned and pressed Liz to come clean on “GH,” and Billy punched Adam on “Y&R.”

Read Soaps.com episode highlights for a quick look back at last week or get a play-by-play of each soap’s episodes through our daily soap opera recaps.

Watch the video below, as Cathy Rankin gives readers the Soaps’ Roundup right here on Soaps.com.

The Bold and the Beautiful:
Eric returned home to hear Ivy had been let go at Forrester. When he asked his niece why Steffy fired her, Ivy brought up Aly’s death and convinced Eric to talk to Steffy. The three of them got together and Steffy told Eric the truth surrounding Aly’s death, about the video and how Ivy blackmailed her. Steffy agreed to rehire Ivy and convinced her to be a team player by representing Forrester as the model for the bedroom line. Ridge insisted Thomas took advantage of Caroline’s state the night they slept together. Caroline didn’t believe Thomas would do that and admitted to Ridge she was pregnant with his son’s baby. Though devastated, Ridge convinced Caroline to keep the baby from Thomas and raise it as their own. Later, Thomas apologized to Ridge for punching him, but Ridge ordered his son to relocate to Forrester Creations in Paris. Read the Bold and the Beautiful daily recaps to find out what huge request Rick and Maya asked of Nicole.

Days of our Lives:
Bo refused to reveal details about the secret serum Victor was funding, as Victor tried to get Roman and Kayla to give Caroline the drug. When Caroline didn’t recognize her daughter, Kayla administered the dosage. Just as Patch returned, believing Bo had been murdered, Bo escaped his captures. Elsewhere, Justin sided with Eddie and gave him the go-ahead to offer the reward for Chad’s whereabouts. Though Rafe was livid, Eve was touched by Eddie’s actions. Chad snuck into Abby’s to share his suspicion that Clyde was the Necktie Killer then put a plan into motion to nail Weston. JJ had a plan too, which led to Clyde’s arrest. Aiden then turned over evidence to have Clyde extradited on murder charges. Will visited a stressed out Abby. After Abby left Will alone at her place, Ben returned and found Will holding his red necktie then murdered him. Read our Days of our Lives daily recaps to hear who found Will’s body after Ben disposed of him.

General Hospital:
Franco rescued a drunken Kiki from a creep at the Floating Rib then took her home. After he convinced Nina to buy Silas’ apartment, Kiki agreed to move in with them. Franco urged Nina to look at Kiki as the child she never had. Over at Wyndemere, Nik became evasive when Hayden questioned him about her shooting. Laura returned and planned to tell Sam the truth about Jake but ended up urging Liz to come clean instead. Elsewhere, Jake wanted to know his true identity before he married Liz and asked Sam to help him uncover the truth. They broke into Wyndemere and copied Nik’s computer files. Patrick entered Sonny’s room and relayed that he was partially paralyzed. Sonny refused to marry Carly, not wanting to be a burden, but changed his mind after learning Ava had temporary custody of Avery. Read our General Hospital daily recaps to learn how a mix-up involving a bag of doughnuts and a pregnancy test led Dante to confront Valerie about a possible pregnancy and had Maxie stunned.

The Young and the Restless:
Vikki and Billy were furious with Chelsea for not telling them about Adam sooner. Victor, Phyllis and Nick realized Jack and Sage had known Gabe’s true identity as well. Billy confronted Adam and began pummeling him until Jack intervened. Later, Sage ran into Adam and after blaming him for losing Nick, she went into labor. Adam delivered her baby boy, who was rushed to the hospital with Sage. Nick and Sage bonded over their son, Christian. When Adam was arrested, Michael insisted on representing him. Adam confessed to Paul all the details about the night Delia was hit but didn’t reveal that Billy shot him. He then struck a deal with Victor in order to make bail. Elsewhere, as Devon received a ransom note for Hilary, Neil and Gwen were informed a tracking device had been planted in the supplies they’d stolen from the hospital. Read The Young and the Restless daily recaps to hear what Patty told Dylan.