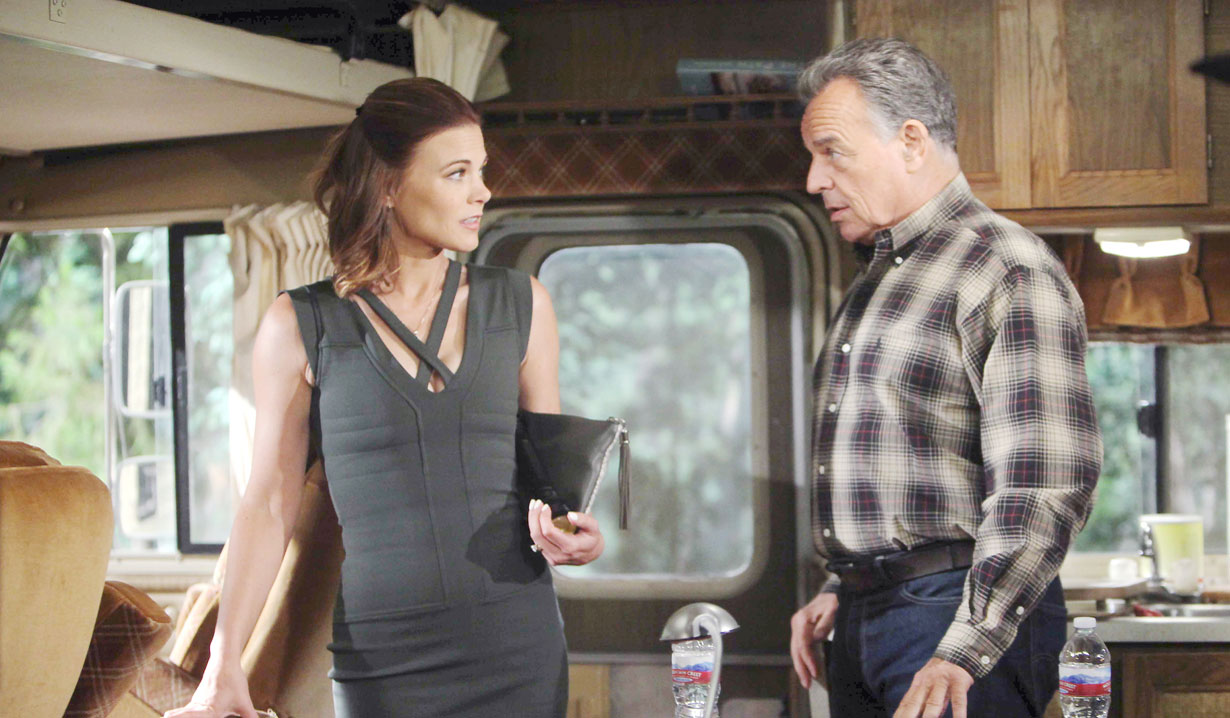 Ridge and Caroline exchanged vows on “B&B.” Stefano had a heart attack on “Days.” Carly had to make a tough decision regarding Sonny on “GH,” and Phyllis invited Ian to dinner on “Y&R.”

Catch up on the week’s storylines through our highlights below and take a closer look into each day’s goings-on by reading Soaps.com’s daily soap opera recaps and checking out Cathy Rankin’s Soaps’ Roundup!

The Bold and the Beautiful:
Steffy had Ivy physically removed from Forrester Creations and privately warned Liam if she couldn’t trust Wyatt, she’d throw him out too. When news of Ivy’s firing spread, many wondered what had really been behind it. Wyatt vowed they wouldn’t get away with firing her and went to Bill with a proposition – to start a rival fashion house in order to take down Steffy and Liam. Though Bill had doubts, Katie was onboard with the idea. It wasn’t long before the Spencers confronted Liam and Steffy. Elsewhere, Ridge and Caroline told Thomas they were getting married immediately then rushed off to the beach. While they exchange their private vows, with plans to make the marriage legal later, Thomas wallowed in self-pity and kissed Nicole. She suspected he kissed her because of Caroline but Thomas denied it. Read the Bold and the Beautiful daily recaps to learn what Brooke urged Ridge to do this time.

Days of our Lives:
Steve learned from John it appeared as though the ISA erased all traces of Bo. While Steve realized where Bo was, Bo sensed Hope was in danger and was desperate to get back to her. Gabi was released from prison, and Chad was released from jail. After Chad had a brief argument with his father, Stefano had a heart attack. Aiden took a call and promised to repay some money then snuck into Stefano’s hospital room and seethed that he better pay him what he was owed. Victor turned up to argue with Stefano next. Clyde gave Ben keys to a new house as a wedding gift then paid a visit to Jennifer, who’d already been warned by JJ of the danger surrounding Weston. When Abby returned home from seeing Chad, Ben admitted he’d been tracking her whereabouts and demanded to know if she still loved Chad. Abby denied it, asked Ben to delete the tracking app then went to convince Chad not to leave Salem. Read our Days of our Lives daily recaps to hear what happened when Marlena put Chad under hypnosis.

General Hospital:
Liz planned to tell Jake the truth about his identity but couldn’t go through with it. Elsewhere, Sam pondered how much Jake was like Jason. Morgan stood at Sonny’s bedside and vowed to kill Julian as revenge. When Patrick informed Sonny could die without surgery – and from surgery – Carly was forced to give the go-ahead. Sonny pulled through the operation and opened his eyes to see Carly. As the family rejoiced that Sonny would be okay, including Kristina who’d arrived home, Morgan located Julian and pulled a gun on him. Franco and Nina awaited Ric in his suite and forced him into signing annulment papers. Scott visited Ava in her cell and explained why it would be beneficial to allow him to represent her. Knowing Scott had the recording of her, Ava agreed to his terms, which included forking over millions in order to get Avery back. Scott got the charges dropped against Ava. Read our General Hospital daily recaps to learn what Dante confided in Nathan about Valerie.

The Young and the Restless:
Gwen accused Neil of stealing Emma’s badge to unlock the hospital’s medical supply closet. Though Neil denied it, when faced with Devon’s suspicions he admitted he had an addiction. All the while, Hilary moved her hand at the sound of Devon’s voice. Esther continued working at Crimson Lights and implied to Dylan that Colin was behind Hilary’s disappearance. Dylan confronted Colin, who pinpointed Neil. Sharon learned from a doctor that she wasn’t pregnant again but lied to Mariah that she was. While Mariah went off and had bad sex with Kevin, Marisa’s husband arrived in Genoa City. Marisa lied to Noah about Luca’s true identity. Phyllis stayed behind at the Abbott cabin while Jack headed back into town on business. She ran into Ian aka ‘Fred’, thanked him for the good advice and invited him to dinner at the Abbott mansion. After Ian realized who Phyllis was, he anticipated the Paragon Project destroying many and quickly accepted. Read The Young and the Restless daily recaps to hear who was brought to Fairview.