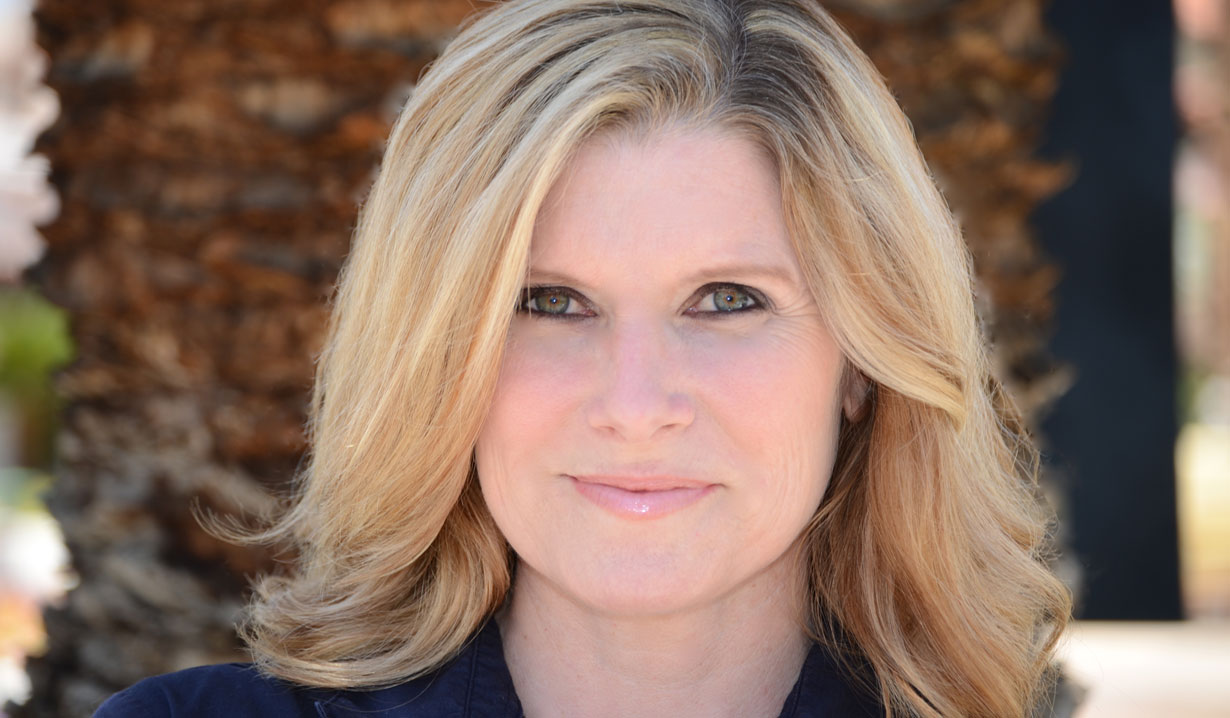 From acting to publishing.

“The Bold and the Beautiful,” “Days of our Lives,” “General Hospital” and “The Young and the Restless” alums have been busy since leaving daytime behind. Soaps.com has primetime roles, book releases, a commercial, one actress sings the National Anthem, another is teaching high school and more in this week’s column.

Linda Gray releases The Road to Happiness is Always Under Construction.
Linda Gray will always be remembered for her roles as Sue Ellen Ewing on “Dallas” (1978 to 2014) and appeared on “The Bold and the Beautiful” as Priscilla Kelly from 2004 to 2005. Not only does she play Joanna Winterthorne on Winterthorne, she just released a memoir. The Road to Happiness is Always Under Construction was released on Tuesday September 8 by Regan Arts and contains very intimate stories on how she learned to lead a loving, healthy life. Visit Amazon and book retailers everywhere to order your copy today!

Here you go! Hope you enjoy it. Book and audio complete! @DeyanAudio@ticosaxaudio. Thank you all so much pic.twitter.com/hk0GNEnQLP

Kayla Ewell and Tanner Novlan get married.
Kayla Ewell spent time on “The Bold and the Beautiful” as Caitlin Ramírez from 2004 to 2005 before moving on to various primetime roles, most notably as Vicki Donovan on “The Vampire Diaries” from 2009 to 2014. People has learned that on Saturday September 12 the actress and her fiancée Tanner Novlan (“Rizzoli & Isles,” “Bones”) tied the knot at the Jonathan Club in Los Angeles, California. Former CW castmate Candice Accola (“TVD’s” Caroline Forbes) attended as one of Ewell’s bridesmaids. The couple, who spent their honeymoon in Belize, met in 2010 while shooting the Sick Puppies’ video for Maybe. Soaps.com sends the couple our very best!

September 12, 2015 was the best day of my life!!!! My husband @tannernovlan pic.twitter.com/XaL8bh3QOB

Deborah Lytton releases Silence.
Interview! Deborah Lytton played the role of “Days of our Lives'” Melissa Anderson (Horton) from 1977 to 1980 with a brief return in 1982. After taking a break from acting in her late teens, Lytton attended UCLA and went on to law school at Pepperdine University. These days she’s a published author and recently released a young adult novel through Shadow Mountain Publishing titled Silence, described as:

Stella was born to sing. Someday Broadway. But everything changes when a tragic accident renders her deaf; she cannot hear, much less sing. Trapped in a strange new world of total silence, she must face not only the loss of her friends, her hopes, and her voice but also the loss of her identity and her life’s purpose.

Hayden is a quiet loner, an outcast, and the only person Stella can communicate with; his profound stutter makes him speak so slowly, she is able to easily read his lips. As they find new ways to communicate despite their disabilities, their friendship grows into an unexpected – but welcome – romance.

Looking back on her daytime career, Lytton shared with Soaps.com what she missed about playing Melissa on “Days.” “I do miss stepping into a role and becoming that character and the camaraderie of cast and crew on set. Working on a soap is unique because the characters become so much a part of you. I will always feel like Melissa and I are linked together.”

When asked if she stayed up-to-date with former castmates and the goings-on in Salem, Lytton replied, “For a time I stayed in touch with a number of actors from ‘Days’ and ‘General Hospital’ and ‘Y&R’ but over the years I’ve lost touch with them. I keep track of the ‘DOOL’ storylines and characters. It’s incredible how long the show has been running. It’s really a testament to the fans and their loyalty.” So… does this mean she’d ever return if the opportunity presented itself? “I loved working on ‘Days’ and the pace of a soap so I would always consider it, especially if I would be working with old friends.”

Visit Deborah Lytton’s website to order Silence and for details surrounding her 2009 release Jane in Bloom.

Lisa Rinna featured in new season of Oprah: Where Are They Now?
Season seven of the OWN channel’s hit series “Oprah: Where Are They Now” premieres on Saturday September 19 and will feature an update on a well-known daytime vet. Viewers will be brought up to speed on the life and career of former “Days of our Lives'” actress Lisa Rinna (ex-Billie Reed, 1992 to 2013, “The Real Housewives of Beverley Hills”). Tune in at 10:00 PM. She recently played Kendra in the parody “The Hotwives of Las Vegas.”

Kristen Alderson sings National Anthem.
One of Kristen Alderson’s dreams came true on August 22 when she took part in the Philadelphia Eagles pre-season NFL home game against the Baltimore Ravens by singing the National Anthem, The Star Spangled Banner, at the Lincoln Financial Field Stadium. The former “General Hospital” actress (ex-Starr Manning/Kiki Jerome, 2012 to 2015) posted the video of her performance on her official YouTube channel with the caption: “My dream came true this day! Finally sang at my Eagles’ stadium in front of my city! I’ve never been more nervous in my entire life. It was everything and more that I ever thought it would be!” Alderson first turned up in daytime as Starr Manning on “One Life to Live” in 1998, a role she held until the soap’s cancellation in 2012.

Emma Samms’ new BBC Radio Gloucestershire project, Visitors.
“General Hospital” fans received a treat when Emma Samms returned to the show as Holly Sutton earlier this year, a role she’s played on and off since 1982. The actress has taken another avenue in her career and has written a new drama titled “Visitors” for BBC Radio Gloucestershire, which she stars in with Lisa Maxwell (“EastEnders,” “The Bill”) and Jon Culshaw (“Dead Ringers”). The program surrounds a missing person named Alice Jenner. Samms even consulted with a police officer to get a clearer picture of such cases. The five episode series premiered on Monday September 7 but can still be heard online throughout the month on BBC.

“Visitors” episode one by @emmasamms1 is now available around the world and on demand at http://t.co/bn6DZnj34m #WhereIsAliceJenner

James Franco: Palo Alto Senior High School teacher.
James Franco (“General Hospital’s” ex-Franco) is giving kids something he wishes he could have taken in high school – a film class. In fact, the multi-talented actor is teaching the eight-part course. Twenty-four lucky students from the Palo Alto, California school had until September 10 to sign up and submit a two-hundred word essay, explaining why they wanted to attend the workshop and what they’d bring to it, as well as a one-minute cell phone video. Those accepted will be given the chance to help produce a film that will be presented at an upcoming festival. The workshops run for four hours at a time, September 13 through December 13.

PALO ALTO HIGH SCHOOL – I will be teaching an 8 part film class for HIGH SCHOOL STUDENTS. ? Sign up NOW! ?link in bio ^^^^^^^^ http://goo.gl/forms/hHTHDAp9uF

Marisa Ramirez and the Bricks & Sticks Chicks for Habitat Humanity NYC.
Marisa Ramirez will be remembered by daytime fans for her roles as Gia Campbell on “General Hospital” and “Port Charles” in 2002 and as Carmen Mesta and Ines Vargas on “The Young and the Restless” from 2006 to 2007. She has played Maria Beaz on CBS’ “Blue Bloods” for the last two years and along with six other actresses from the show has formed the Bricks & Sticks Chicks. The group will set out on Saturday September 26 to help Habitat Humanity NYC #WomenBuild2015. In order to meet their fundraising goal Ramirez is asking for donations, big or small. Visit Marisa Ramirez’s Habitat Humanity New York City page today and tune in to “Blue Bloods” for its season six premiere on Friday September 25 at 10:00 PM.

Siena Goines puts in her 15 year notice.
A commercial for State Farm Insurance is currently circulating networks on national television. The actress at the center of it will look familiar to longtime “The Young and the Restless” fans. Siena Goines played Callie Rogers, Malcolm Winters’ (Shemar Moore) ex-girlfriend, from 1998 to 2000. She had numerous primetime appearances thereafter and turned up on “Passions” as Valerie Davis in 2007. These days Goines is currently working on the projects “Nina,” “The Last Punch,” “Brothers in Atlanta” and “Lost Girls.”

Watch former “One Life to Live” actor (ex-David Vickers) Tuc Watkins in Where the Bears Are, find out which actor is making a cameo on “Madame Secretary,” who opened up about their battle with cancer and more surrounding stars of canceled soaps.

Use our search option to locate other ex-soap actor highlights and leave us a comment to request ones we haven’t already shared updates on.