General Hospital:
Scott was ordered to prosecute Franco or risk losing his career. When Scott stepped down, Ric took his place as DA. In the cells, Ava showed Franco a photo she took of Nina standing over Silas' dead body and ordered him to steal evidence from Scott so she could get her life back. Franco managed to call Nina to inform that Ava killed Silas. Later, as Silas' ghost haunted Ava, Nina broke out of Shadybrook and confronted her. All the while, Morgan wouldn't give his parents a straight answer regarding whether or not he killed Silas. Elsewhere, while Sam convinced Liz to accept Jake's marriage proposal, Hayden agreed to move in with Nik. Dante found Lulu crying at home after having read Dillon's screenplay about a couple whose relationship was destroyed due to cheating. Read our General Hospital daily recaps to learn who surprised Dante and Lulu with a visit and who received a mysterious call.

The Young and the Restless:
Hilary noticed Devon was on edge and wondered if something happened at his bachelor party. Neil reassured her then fantasized about Hilary calling off the wedding after seeing the video of Devon in bed with the girl. When their day came, Colin continued to blackmail Devon, who stopped the wedding. Kevin snooped around the station, became suspicious of Harding and convinced Paul to investigate him. Harding met Marco at the Abbott cabin. While there, Marco and Harding discussed how Austin, Courtney and Tobias died at their hands, with Harding having murdered Austin and Courtney. Phyllis visited Marisa, who reassured her of Jack's love and his quest to get home to her, as Marco made plans to regain Jack's life - and his wife. In Paris, Adam told Chelsea he'd monitored her and Connor ever since he'd been gone. She forgave Adam and agreed to give him another chance. Read The Young and the Restless daily recaps to find out who called Chelsea with information on 'Gabe'. 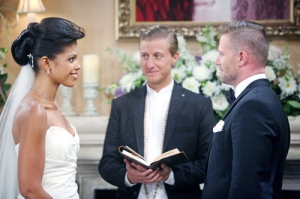 “Stay away from Parker.” – Daniel Jonas

Maya debated calling off the wedding on “B&B.” Ben wondered if Abby was carrying Chad’s baby on “Days.” Sonny received a mysterious call on “GH,” and the killer was revealed on “Y&R.”

Even if you miss an episode or two of your favorite soaps you can get a quick rundown of the week’s highlights below or read Soaps.com’s in-depth daily soap opera recaps for “B&B,” “Days,” “GH,” and “Y&R.”

The Bold and the Beautiful:
Nicole found Maya sobbing over their father’s hurtful words, as everyone waited downstairs at the mansion for the wedding to begin. She wanted to call the wedding off, but Nicole convinced her not to allow their father’s hate to ruin her and Rick’s day. Maya’s parents walked her down the aisle and after Julius handed her off to Rick, Maya stopped the wedding. She told Julius she heard what he said and gave him the opportunity to leave. After a battle of words, Julius walked out and Vivienne stayed, proud to be Maya’s mother. Rick and Maya were soon pronounced husband and wife. Elsewhere, Ivy continued to blame Steffy for Aly’s death. Though she wanted Steffy to pay, someone else urged Steffy to stay quiet. Read the Bold and the Beautiful daily recaps to learn who Steffy opened up to about the night Aly died.

Days of our Lives:
Ben slid the engagement ring on Abby’s finger in front of Chad and announced their plans to marry. Once alone, Abby shared her pregnancy with Ben, who recalled her cheating with Chad. Elsewhere, as Clyde learned Aiden had been snooping around in his business, Rafe refused to help Hope uncover why Aiden had dropped his client. Kate later confronted Rafe over his feelings for Hope then canceled a date with Clyde. Daniel prevented Xander from going after Nicole, who’d taunted him in the woods. As Daniel went to confront Victor, word came of Caroline’s stroke and many raced to the hospital. Eric learned Serena saved Caroline and asked her not to leave town. The family, as well as Caroline, thanked Serena. Brady witnessed Theresa’s emotional state, due to Caroline, and allowed her to stay at the mansion – with a few conditions. Read our Days of our Lives daily recaps to hear why Kate thanked Marlena and why Paul became disgusted with Will. 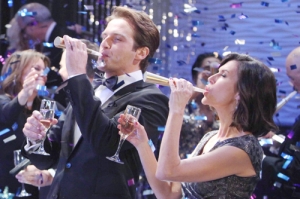 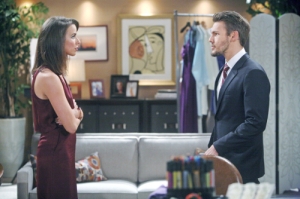