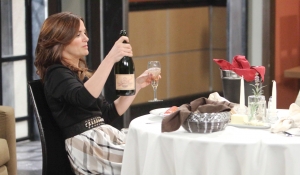 Keep current on all of the comings, goings and happy personal news of “The Bold and the Beautiful,” “Days of our Lives,” “General Hospital,” and “The Young and the Restless” in Soaps.com’s always updated news rooms.

The Bold and the Beautiful:
A former “B&B” actor is lending his acting chops in a new daytime drama-based advertisement. Find out which big names he’s working with on the soap spoof. Then go back to 2002 when Stephanie Forrester caught Brooke Logan kissing Deacon Sharpe – while he was still married to her daughter Bridget! But who did Stephanie initially think Brooke was kissing before she came face to face with the smoocher? Vote now. And Candace is on the fence about NuThomas in her “B&B” rant this week. Do you feel the same? Get it all in Soaps.com’s The Bold and the Beautiful news room.

Days of our Lives:
Do you remember the time in 2002 when “Days'” John Black helped Marlena Evans get back her lost memories concerning Tony DiMera? He forced her to acknowledge some uncomfortable moments – vote about them now in our Throwback Thursday poll. Christine thought Nicole coming clean with Daniel was the highlight of the year in Salem in her Deconstructing “DOOL” blog – do you agree? Learn more in Soaps.com’s Days of our Lives news room.

General Hospital:
Hello again… and again! One “GH” actress is back in the studio now that her character is coming out of a coma, while another actress is reprising a role she once played years ago. And congrats are in order for both Michelle Stafford and Teresa Castillo – find out why! One doctor is about to say goodbye to Port Charles while another former doc just did the late night circuit to promote a new project. And a former couple on and off the show have had their Hallmark show renewed for a third season. Back in 1993 Sonny Corinthos had a hand in corrupting teenage Karen Wexler after he hired her to strip at his club. Vote in our “GH” Throwback Thursday Poll about what you think Karen’s stripper name was. And was Luke’s departure all that you thought it would be? Get Dustin’s thoughts about the icon’s exit and more in Deconstructing “GH,” all in the General Hospital news room.

The Young and the Restless:
Baby pics! Go inside the shower of an expecting “Y&R” actress. Then return to 2004 when Nikki Newman wanted to be sure Bobby Marsino was really prepared to marry the much-younger Brittany Hodges. He made a comment that was awkward for both him and Nikki. Do you remember what he said? Vote now in Soaps.com’s Throwback Thursday poll. And if there was any doubt about Sharon’s pregnancy, Candace was convinced after the ultrasound in her blog Deconstructing “Y&R.” Were you? Get all the Genoa City news in The Young and the Restless news room.