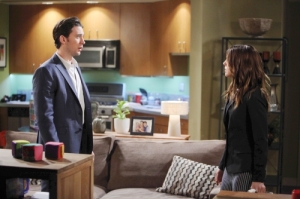 Getting rejected, getting lied to, and getting paranoid.

The Bold and the Beautiful:
Things get tense when Thomas returns to the family fold. He doesn’t like to see the way that Ridge has been acting. Making matters worse, Caroline makes it clear to her former beau that she is strictly loyal to his father now. Meanwhile, Liam has to figure out which woman in his life he’s going to be loyal to. Whoever it is, the rejected woman quickly finds some comfort with Wyatt. Check out The Bold and the Beautiful spoilers to discover what Brooke and Deacon discuss.

Days of our Lives:
Serena uses an incriminating recording to get revenge. After playing it for Daniel, the doctor gives Nicole a shot to be honest with him. Meanwhile, Theresa and Anne desperately look to recruit someone in the Kiriakis mansion onto their side. Across Salem, Clyde becomes outraged when he discovers that Aiden has been digging into Ben’s past. And Paige gets upset enough to actually open up to JJ. Read the Days of our Lives spoilers to find out who can’t keep their feelings hidden anymore.

General Hospital:
As Madeline decides to start meddling in Nathan and Maxie’s relationship, Franco starts to suspect that Nina is being set up. While Ric puts pressure on Nina, Franco confronts Morgan about Denise before setting his sights on Madeline. Across town, Dillon and Valerie make a deal. And Laura confronts Liz about the secret she’s been keeping. Read Soaps.com’s General Hospital spoilers to learn how Luke says his final farewell to Port Charles.

The Young and the Restless:
Adam’s life as Gabriel continues to fall apart. Chelsea learns of his dalliance with Sage and tears him up over it. Meanwhile, Sage sheds some tears and informs Nikolas that she’ll be moving out to make things easier for him. Across Genoa City, Dylan has a confession to make to Sharon. And Cane lashes out when he catches Joe putting the moves on Lily. Visit The Young and the Restless spoilers and find out what Kevin finds at the lake.

Sneak a peek at Soaps.com's...