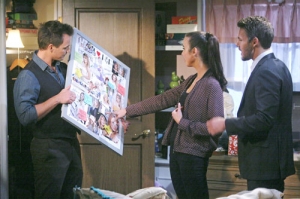 Aly died on “B&B.” Clyde learned about Abby’s pregnancy on “Days.” Laura overheard a secret on “GH,” and Jack talked to Victor on “Y&R.”

Whether you missed the soaps this past week or you just want a refresher, Soaps.com has provided our readers with episode highlights and in-depth daily soap opera recaps for “B&B,” “Days,” “GH,” and “Y&R.”

The Bold and the Beautiful:
The Forrester Fashion Show ended with Rick proposing to Maya who said yes, leaving her mother in tears. Brooke hugged Maya with approval, as Julius expressed his as well then admitted to his wife he was glad Rick was taking his embarrassing son off their hands and how he planned to reap the rewards of L.A. Aly fumed over the whole event and punctured Steffy’s tire before following her as she left for the after party. As Ivy, Liam and Wyatt came across Aly’s revenge board at the mansion, Aly listened to the floating head of Darla and raced toward Steffy, who’d pulled over to assess the flat. After stopping short of hitting her, Steffy pulled Aly out of the car and screamed how she could’ve killed her. Aly broke down then swung a tire iron at Steffy, who ended up with the upper hand as Aly fell to her death on a rock. Read the Bold and the Beautiful daily recaps for Thorne’s reaction to Aly upon his return home.

Days of our Lives:
Clyde found Abby crying with Hope and later learned she was pregnant. He suspected there was a paternity issue and didn’t want Ben missing out on Abby’s inheritance. Clyde then made a donation to the hospital’s prenatal care unit and planned to gain access to Abby’s baby’s paternity results. All the while, Chad went to Abby after Stefano urged him not to let her go. JJ received permission to fill Jenn in on his undercover work then briefly met Kyle in the park. Before JJ could tell Jenn his news, Paige warned his mother that JJ was hanging out with a drug dealer. Jenn confronted JJ, learned he was undercover and worried about his safety. Elsewhere, while Nicole accepted Daniel’s marriage proposal, Rafe admitted to Hope that he was crazy about her. Eric visited Nicole to warn Serena might have overheard them discussing their secret then wished her well with Daniel. Read our Days of our Lives daily recaps to learn who eavesdropped on Eric’s confession.

General Hospital:
Carly was stunned to learn Little Jake was alive and wondered who'd been Joss' donor. As she went to the hospital for answers, Laura overheard Nik tell Liz that Lucky left knowing Jake was Jason and chastised her son. Lulu confronted Valerie at the PD over her and Dante's kiss. Valerie apologized and assured Lulu things hadn't gone any further. Jordan then warned Valerie if it happened again there would be consequences. Tracy forgave Luke at The Haunted Star. Though she refused to marry him, they professed their never-ending love and said goodbye. Luke gave Michael permission to tear down his childhood home before heading over there with a gun, planning to end things. Inside, he was visited by the spirits of his father, mother and Patricia, who changed his mind. Read our General Hospital daily recaps to hear how Brad broke the news to Lucas that he couldn't marry him - because he was already married.

The Young and the Restless:
Victor was released on bail and told 'Gabe' how much he reminded him of his son Adam. Victor then located Marisa, who informed that he shot Jack - not Marco. Meanwhile, Noah learned Marco was Marisa's ex. Over at the hospital, Phyllis believed Jack was trying to get across that Adam wasn't his son via hand signals. Later, Jack revealed to Ben he could talk and asked for a favor. Victor soon appeared and Jack spoke to him too! After they came to an understanding, Jack told his family Victor shot him in self-defense. Elsewhere, to prevent another DNA test Adam stepped down from the company and admitted he wasn't Jack's son. Speaking of DNA tests, Nick found Sage's DNA results and learned the baby was his, as well as the fact that she slept with Gabe. Avery made her rounds and said goodbye to many in Genoa City. Read The Young and the Restless daily recaps for details on Abby's car accident and what Ben admitted to Ashley afterwards.