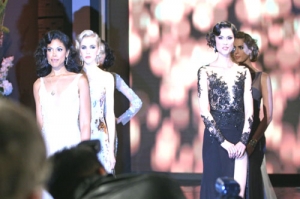 Find highlights from this past week’s episodes through the blurbs below and read Soaps.com’s daily soap opera recaps for a play by play of each day on “B&B,” “Days,” “GH” and “Y&R.”

The Bold and the Beautiful:
Julius admitted to Maya that he told people his son was dead then shocked her by claiming to want a fresh start. After Julius announced they’d be staying in Los Angeles, Vivienne questioned his change of heart. Nicole questioned it too and confronted her father. Julius then paid Rick a visit to be sure he was committed to his daughter. At Forrester, Aly acted as though she was onboard to make Maya the face of the California Freedom line, as well as using transgender models for the fashion show. Darla’s floating head urged Aly to put a stop to the madness at the company, which led Aly to put a plan into motion. Read the Bold and the Beautiful daily recaps to find out how events unfolded at the fashion show.

Days of our Lives:
Will promised to stay quiet about Abby’s positive pregnancy test, which she hid in the trash. After Abby left, and received confirmation of the pregnancy from Kayla, Hope arrived with a housewarming gift, saw the test and took it. Elsewhere, as Stefano admitted to Chad that he wanted him with Abby because she was about to inherit a fortune, Cydle listened in through the bug. Eric broke up a fight between Nicole and his ex at Serena’s. Serena overheard Eric and Nicole discussing ‘what happened between them’ then unsuccessfully tried to get a recorded confession from Xander. Later, after Eric found Nicole moving into Daniel’s and professed his love, Daniel confided in Hope his plans to propose to Nicole. Over at the mansion, Theresa executed a plan to get rid of Tate’s nanny, which resulted in Brady agreeing to fire Hayley. Eve spied Jenn consoling Paige in the square and secretly drugged Jenn’s drink. Read our Days of our Lives daily recaps to learn what action JJ took when Paige refused to listen to his warnings about Kyle.

General Hospital:
Liz was overwhelmed as Lucky reunited her with her son and explained how Helena had taken Jake. Later, she became unnerved when Jake/Jason met Jake and began having flashbacks. Lucky visited Nik and confided that he didn't know where he belonged, due to his frame of mind. Nik confessed that Jake was Jason and assured Lucky that Liz and little Jake would be well taken care of if Lucky decided he couldn't stay in Port Charles. Elsewhere, Dante lied to Lulu and claimed things didn't go any further than a kiss with Valerie, who promised to keep their sex a secret. Luke found Tracy in bed with Paul and left the mansion when she wouldn't accept his explanation for leaving town with Laura. In their suite, while Ric tried to make Nina believe she'd kidnapped Avery, Sonny refused to allow Denise/Ava access to the baby. Read our General Hospital daily recaps to hear whether or not Carly accepted Sonny's marriage proposal and how Alexis and Julian spiced up their relationship.

The Young and the Restless:
Avery held Joe at gunpoint and demanded he confess to raping her, as Paul told Dylan and Sharon they caught a guy attempting to rape someone. Dylan told Paul Avery took his gun and they stopped her from shooting Joe. After Paul arrested Avery, Joe dropped the charges then was punched by Cane for sleeping with Lily. Chelsea overheard 'Gabe' reveal himself as Adam while talking to Victor's portrait at Newman. After an emotional confession, Chelsea confronted Sage then stopped Adam from revealing his identity to everyone. Phyllis caught Marisa in Jack's hospital room. Jack confirmed via a hand-squeeze that he knew Marisa, how Victor hadn't lured him to the park and managed to write a '2', meaning there was 'two of him'. Victor urged Nikki to look for Jack's missing gun that Gabe took. Later, Ashley found it and called the police. Paul confiscated the gun, which was covered with Jack's fingerprints. Read The Young and the Restless daily recaps to find out what Marisa said to Sage and Victor.

Meredith Stiehm Will Be WGA West’s Next President; Women Will Hold All Three Top Elected Posts For First Time