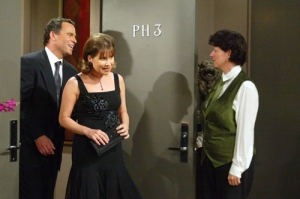 Out and about after daytime.

This week Soaps.com located some film and primetime roles, directing gigs, a passing, fan Q&As and more for former actors of daytime soaps “The Bold and the Beautiful,” “Days of our Lives,” “General Hospital” and “The Young and the Restless.”

Whatever happened to some of the original B&B cast?
Soaps.com readers have wondered what happened to some of the original actors who played Kristen Forrester, Donna Logan, Katie Logan and Storm Logan on “The Bold and the Beautiful.” Though we’ve reported a few new projects for other original members, there isn’t much to pass on regarding these actors. Teri Ann Linn, who played Kristen from 1987 to 1994, went on to appear as Amanda on “Fallout” and Giulia Colombo in “Anni ’60” in 1999. As for those who portrayed the original Logan clan… Carrie Mitchum (ex-Donna, 1987 to 2001), Nancy Sloan (ex-Katie, 1987 to 2004) and Ethan Wayne (ex-Storm, 1987 to 2003) haven’t been seen since leaving their daytime roles. However, Mitchum was married to Casper Van Dien (ex-Ty Moody, “One Life to Live”) from 1993 to 1997 and shares two children with him. Sloan appeared on one episode of “Days of our Lives” in 1989 as Sally Wales.

Jennifer Finnigan lends her voice to Icky: An American Dog Story.
Meowwwww… Jennifer Finnigan was one of many actresses who played the role of Bridget Forrester on “The Bold and the Beautiful” (2000 to 2004). She currently plays Molly Al-Fayeed on the FX series “Tyrant” and can be heard in the upcoming film “Icky: An American Dog Story.” Finnigan will voice the role of a cat boss named Kool Kitty, the nemesis of a New York City ‘made’ dog named Paw Poochini (Dan Lauria, “The Wonder Years,” “One Life to Live’s” ex- Gus Thompson). The story follows Kool Kitty’s plan to gain control of all of the pet stores by driving Paw Poochini out of business. Stay tuned for its release date. “General Hospital’s” Ronnie Marmo (ex-Ronnie Dimistico) also takes part in the project as Jefferson. Speaking of which…

Ronnie Marmo goes behind the scenes and directs Adam & Eve and Steve.
Ronnie Marmo played “General Hospital’s” Ronnie Dimistico for a few years before his character was shot and killed by John McBain (Michael Easton, “GH’s” Silas) in 2012. Since leaving daytime he’s appeared in a lot of primetime and film roles and is currently working alongside Katy Jacoby (ex-nurse, “General Hospital” and “Y&R,” ex-Sharon “Days of our Lives”). Marmo will direct, with Jacoby co-producing/co-directing, “Adam & Eve and Steve: The Musical,” which opens at Theatre 68’s NoHo Arts Center at 11136 Magnolia Boulevard in North Hollywood, California. The “controversial, fantasy, musical farce” is based on the Biblical story of Adam and Eve, except when the devil interferes a new person is added to the mix – Steve. The comedy will have the characters engaging in mischievous fun as they struggle to uncover what love has to offer. Tickets can be purchased through the link with performances running from July 10 through August 30.

Mark Valley gets ready to lay on the charm in Girlfriends' Guide to Divorce.
We're taking "Days of our Lives" fans back to the 90s to remember the actor who played Jack Deveraux from 1994 to 1997. Mark Valley has just landed a role for season two of Bravo's first original scripted series "Girlfriends' Guide to Divorce." TVLine has learned that his character, a charming TV personality named Dr. Harris, will be interested in Abby McCarthy (Lisa Edelstein). Stay tuned for the show's return date, as the upcoming season is now in production. Valley also played Father Pete on "Another World" in 1993 and has held many roles in primetime on series such as "ER," "Boston Legal," "Harry's Law," "Body of Proof" and most recently "CSI: Crime Scene Investigation."

In other news, I'm just thrilled to be working soon on #GG2D @Bravotv

Lisa Rinna and Tammin Sursok team up in Bound & Babysitting.
Soap alums Lisa Rinna ("Days of our Lives'" ex-Billie Reed, 1992 to 2013) and Tammin Sursok ("The Young and the Restless'" ex-Colleen Carlton, 2007 to 2009) both star in the made for television movie "Bound & Babysitting." Maggie (Sursok) and Alex (Travis Van Winkle), who've always butted heads, are forced together to babysit their best friends' kids and find that when their job is up, going back to their individual lives might not be what they want. Look for Rinna as Jane, as the movie can be seen on the PixL network, a family safe channel with no commercial interruptions. Please check your cable and satellite providers to see if PixL is available in their lineup. Learn more about the film through the sneak peek interviews below.

Jack Crosby dead at 88.
"General Hospital's" very first art director has passed away. Jack Crosby joined the crew of the ABC soap upon its inception in 1963, where he served as the art director until 1975. On June 14, Crosby passed away due to complications from Alzheimer's. Prior to his daytime job, he was the art director for the television series "Seven Keys" in 1961 and was the nephew of famous singer and actor Bing Crosby. Soaps.com sends his family and friends our deepest condolences.

Drew Garrett in The Tiger Hunter.
Former "General Hospital" actor Drew Garrett (ex-Michael Corinthos, 2009 to 2010) will be appearing in the upcoming October film "The Tiger Hunter." Playing the role of Derrick, the film surrounds a young Indian's quest for success upon his arrival to 1970s America. However, he makes a change in plans in order to win over his childhood crush by coming up with a complex sham involving a group of misfits. Since leaving daytime, Garrett has had guest appearances on "The Mentalist," "Never Fade Away" and plays Jimmy Lowe on "Youthful Daze."

Scott Reeves becomes a dad again in Invisible Sister.
From daytime to Disney, Scott Reeves will appear in the made for television fall movie "Invisible Sister." Filming took place in New Orleans, Louisiana for the comedy that surrounds Chloe's (Rowan Blanchard) science project gone-wrong with the results leaving her popular sister Molly (Paris Berelc) invisible. Look for Reeves as the girls' dad. The actor is well-known in daytime, having had roles on "Days of our Lives" (ex-Jake Hogansen, 1988), "The Young and the Restless" (ex-Ryan McNeil, 1991 to 2001) and "General Hospital" (ex-Steve Webber, 2009 to 2013). He's also turned up on the ABC hit "Nashville" as Noel Laughlin and is married to "DOOL's" Melissa Reeves (Jennifer Horton), who he shares two children with.

D.C. Douglas guests on Z Nation.
Daytime fans of "The Young and the Restless" know D.C. Douglas as Kurtz/Chad Atherton (on and off from 1996 to 2014) and will soon be able to see him in a guest-starring role on Syfy's zombie series "Z Nation." Look for the actor to appear during season two, later this fall, as someone who hates zombies - unlike the character he voices on the "Resident Evil" video games, Albert Wesker. Douglas has had numerous daytime roles, including ex-Sidney on "General Hospital" (1991), ex-Dr. Kirkwood on "Passions" (2007), a minister, ex-Dr. Whittman and ex-Chip on "The Bold and the Beautiful" (1997 to 2011) and as a bellman, ex-Bob Salke and ex-Brad on "Days of our Lives" (1991 to 2014).

Barbara Crampton's new horror film, We Are Still Here.
Barbara Crampton has worked with some of daytime's biggest stars in the soap operas "Days of our Lives" (ex-Trista Evans Bradford, 1983), "Santa Barbara" (ex-Paula, 1984), "Guiding Light" (ex-Mindy Lewis Spaulding, 1993 to 1995), "The Bold and the Beautiful" (ex-Maggie Forrester Warwick, 1995 to 1998) and "The Young and the Restless (ex-Leanna 'Love' Randolph, 1988 to 2007). These days she's making viewers jump out of their seats in the June released horror film "We Are Still Here," where an old house comes to life every thirty years demanding a sacrifice. Crampton plays Anne, who along with her husband Paul (Andrew Sensenig), moves to New England to heal from their teenage son's death. The hopes of starting a new life quickly ends when the couple becomes the prey of the very house they're living in. The film is currently airing in select theaters and through video on-demand.

WE ARE STILL HERE Theatrical Trailer

The new trailer to WE ARE STILL HERE is here!On VOD and in select theaters this Friday!

"Guiding Light" alums (ex-Josh and ex-Reva) Robert Newman and Kim Zimmer reunite in Gypsy, plus two other former soap stars from canceled soaps are expecting their second child together, there's marriage news and much more in our Where Are They Now column.

Type in an actor and/or character name in our search option on Soaps to find past reports on other former daytime stars. Still not seeing who you're looking for? Leave us their name in the comments and we'll try our best to check in with the actor.

‘Little Girl’ Review: A Trans Girl Grows Into Herself in a Lovely, Light-Filled Documentary