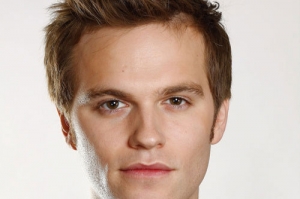 This week’s column brings Soaps.com readers new roles, how to catch stars onstage, baby news, marriage vows and more for some of daytime’s favorite former actors of defunct soap operas “As the World Turns,” “Guiding Light,” “One Life to Live” and “Passions.”

Van Hansis kickstarts for Ms. Guidance.
Van Hansis, known in daytime as one half of “As the World Turns'” ‘Nuke’ fan favorite couple aka Noah (Jake Silbermann) and Luke, is looking for fan support in his latest project, “Ms Guidance.” Co-written by playwright James Ryan Caldwell, the story surrounds a struggling actress who takes a job as an interim guidance counselor at a performing arts school she attended as a kid. However, the more she listens to the dreams of her students, the more her schemes for fame threaten the lives of others, as well as her own. Visit Hansis’ Kickstarter campaign for Ms. Guidance for a preview of the dark comedy.

Austin Peck and Terri Conn expecting.
Former soap alums Austin Peck and Terri Conn are extending their family! Peck took to Twitter to announce his wife’s pregnancy and posted this photo below. This will be their second child together, Keira being their first, in addition to children from previous marriages – Peck’s sons Aidan and Roman and Conn’s daughter Julia. Soaps.com sends the big family our best! Peck appeared on “Days of our Lives” as Austin Reed (1996 to 2007), “As the World Turns” as Brad Snyder (2007 to 2009) and “One Life to Live” as Rick Powers (2011 to 2012). Conn played Katie Peretti Snyder, who was married to Peck’s character on “As the World Turns” (1998 to 2010) and Aubrey Wentworth on “One Life to Live” (2010 to 2011).

Vanessa Ray and Landon Beard get married.
She’s recognized today for her role as Cece Drake on “Pretty Little Liars” and Officer Edit Jenko on “Blue Bloods.” Vanessa Ray also played Teri Ciccone on “As the World Turns” from 2009 to 2010 and is currently enjoying life as a married woman. The actress and musician Landon Beard tied the knot on Sunday June 14 during an intimate ceremony at Condor Nest Ranch in Pala, California. E! shared details on the nuptials, which were officiated by the bride and groom’s fathers and attended by fellow soap stars Kim Matula (ex-Hope Logan, “B&B”) and Kelly Sullivan (Sage Kellerman, “Y&R”). The bride wore two gowns designed by Shareen and Carol Hannah and later celebrated with guests for tacos, stuffed tamales and wine. Soaps.com sends our congratulations!

You have to see the stunning photos from Vanessa Ray's boho-rustic nuptials. @vrayskull ? pic.twitter.com/6yn1JexNIN

Grant Aleksander onstage in Mary, Mary.
Grant Aleksander first appeared in daytime on “Capitol” in 1986 as D.J. Phillips before landing the biggest role of his career as “Guiding Light’s” Phillip Spaulding from 1983 to 2009. Fans can now catch the actor onstage in “Mary, Mary” at the Cape May Stage Theater at 405 Lafayette Street in Cape May, New Jersey until Friday July 24. Directed by former “Days of our Lives” producer Roy Steinberg, the audience will witness a hilarious tale of a nearly divorced couple who ends up trapped in an apartment with three other people. Aleksander plays Dirk Winston and also appeared as Alec McIntyre on “All My Children” from 1993 to 1995. Tickets can be purchased through the link.

Robert Newman and Kim Zimmer reunite in Gypsy.
Together again! Fans of "Guiding Light" won't soon forget the onscreen love story of Josh Lewis and Reva Shayne. The actors who formed the iconic couple are reuniting once again. Robert Newman and Kim Zimmer are currently starring in "Gypsy" at Pittsburgh's Civic Light Opera Benedum Center at 237 7th Street in Pittsburgh, Pennsylvania from now until Sunday July 19. The musical is based on the memories of Gypsy Rose Lee, a burlesque superstar, and the mother behind the curtain - Mama Rose (Zimmer). Look for Newman as Herbie and reserve your seats today through the link above.

Tom Degnan is off the market and engaged.
"One Life to Live" alum Tom Degnan (ex-Joey Buchanan, 2010 to 2012) is officially off the market, ladies. The actor and girlfriend Erin Cummings ("The Astronaut Wives Club") are engaged with a wedding planned for next summer in Notre Dame, Indiana. The actress shared with The Detroit News how blown away she was by Degnan's proposal, which led her on a Manhattan, New York scavenger hunt that ultimately reunited her with her husband-to-be who presented her with a ring by jeweler Carlos Carmona and proposed at the Bethesda Fountain. The actress appeared as a roadhouse girl on "Passions" in 2005 and Degnan played Adam Munson on "As the World Turns" prior to his "One Life to Live" role. We wish them a lifetime of happiness!

Heidi Mueller married and expecting baby number two.
Soaps.com reported Heidi Mueller and DeMarco Murray's engagement back in January and now we're happy to share this update. The former "Passions" actress (ex-Kay Bennett, 2002 to 2008) and her Philadelphia Eagles running back (formerly of the Dallas Cowboys) fiancé tied the knot and are preparing to welcome their second child together. We send the happy couple our very best!

Travis Schuldt, Natalie Zea and baby makes three.
More baby news! "Passions" castmates and husband and wife team Travis Schuldt and Natalie Zea are planning for their first child together. The former daytime actress is pregnant and due to deliver sometime this fall. Schuldt played Ethan Winthrop in 1999 with Zea as Gwen Hotchkiss Winthrop from 2000 to 2002. Both actors have gone on to have successful careers in primetime, most recently with Schuldt playing Ben on "It's Always Sunny in Philadelphia," Rick on "Community" and Nate on "The Fosters" and Zea as Claire Matthews on "The Following" and as Winona Hawkins on "Justified." Congrats go out to both!

We've dug up news on "B&B," "Days," "General Hospital" and "Y&R" alums as well. Nick Fallon co-wrote I Killed my BFF, one actress met and married a man on Facebook, another was arrested for DUI and more.

Use the Search option on Soaps to find scoops on others who've left daytime and leave your questions below about ones we've yet to cover.