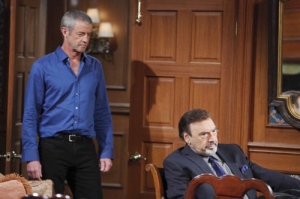 Aly was ordered to get rid of Steffy on “B&B.” Eve stole Marlena’s files on “Days.” Ethan was kidnapped on “GH,” and Victor appointed Adam as CEO of Newman-Abbott on “Y&R.”

Through Soaps.com’s soap summaries fans can catch up on their favorite soap operas, as well as get the inside scoop in detail for each episode by reading our daily soap opera recaps.

The Bold and the Beautiful:
Zende returned to apply for the internship program at Forrester and asked that Ridge and the others not reveal that he was family. Caroline and Ridge were impressed that he wanted to be on a level playing field with the other interns. Nicole appeared and asked Ridge for a chance to prove herself as well. Ridge hired all the interns then revealed Zende’s true identity to Nicole. Zende and Nicole bonded, as did Caroline and Maya. Elsewhere, Liam told Ivy he wanted an annulment. When Aly learned, she confronted Steffy in front of Liam and vowed not to allow her to ruin his and Ivy’s life. Soon, Darla’s head appeared and told Aly to get rid of Steffy. Ivy and Liam signed annulment papers, which only furthered Aly’s rage. Read the Bold and the Beautiful daily recaps to find out whose mother arrived in town, as the Forresters and Spencers celebrated the Fourth of July.

Days of our Lives:
Victor was opposed to Theresa living at the mansion and ordered her to stayed out of his way. Theresa wanted to be a fulltime mother but Brady expected her to go back to work. She went to the hospital and helped Eve access Marlena’s file on Laura Horton. Xander arrived at the station, claiming to have been in Chicago during the attack on Eric and Nicole. Though he was arrested for attempted murder, Serena was released. It wasn’t long before Xander was released as well and came face to face with Nicole. Elsewhere, Ben confided in Clyde about Abby sleeping with Chad. Clyde went to the DiMera mansion and suggested it would be in everyone’s best interests, meaning Stefano and Victor’s, if all three of them came to an understanding as not to step on each other’s toes. Stefano refused to be intimated. Before he had Clyde thrown out, Clyde bugged Stefano’s office. Read our Days of our Lives daily recaps to learn what realization Sonny came to, after Will admitted to further cheating, and how Adrienne reacted to Justin’s divorce papers.

General Hospital:
Valerie promised to forget that Dante kissed her and urged him to work things out with Lulu. Holly joined Luke and Laura in British Columbia and informed them that Ethan had been kidnapped too. Dante arrived, suspected Lulu had been cheating with Dillon and found her room empty. Elsewhere, Luke, Laura, Holly, Lulu and Dillon followed a clue. Luke found Ethan standing on a bomb and managed to disarm it. Suddenly, Laura, Holly, Lulu and Dillon joined them as Frank Smith, an enemy from Luke's past, held them at gunpoint. Soon, Ethan was shot. Back in Port Charles, Ric and Madeline continued to scheme until Nina finally signed over her power of attorney to him. Michael brought Avery to Sonny's, making his parents proud that he was returning his sister where she belonged. Ava learned of Avery's whereabouts and went to Sonny's, who refused her access to the child. Read our General Hospital daily recaps to find out who celebrated the holiday with a kiss.

The Young and the Restless:
Adam convinced Victor to appoint him CEO of Newman-Abbott in exchange for covering up the shooting. Once Victor fled, Adam realized the victim was Jack who later slipped into a coma. Victor confessed to Vikki he'd shot Jack in self defense. Vikki gave Victor an alibi but later admitted to Paul that she lied. As Jack opened his eyes and pointed out Victor as his shooter, Kevin looked at the coffeehouse's video footage and saw 'Jack' walk by twice! In the end, Adam backstabbed Victor by coming forward as an eyewitness, which led to his arrest - and Victor's confession. Marco attempted to lure Marisa away to kill her but she managed to escape and was taken in by Noah. It wasn't long before she called Adam, reported that Marco was dead and blackmailed him. Avery went to Joe's room, where he denied raping her, and vowed revenge. Read The Young and the Restless daily recaps to learn everyone's reaction to the results of Jack and Gabriel's DNA test.