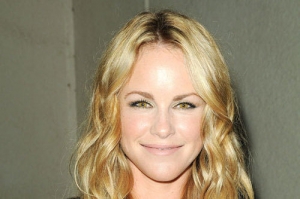 Checking in with the actors.

Soaps.com located a soap star turned novelist, a horror flick, primetime roles, including the revival of an old character, fan Q&As and more in this week’s column surrounding the current careers of former “The Bold and the Beautiful,” “Days of our Lives,” “General Hospital” and “The Young and the Restless” actors.

Kim Matula joins Alley Mills in Maybe Someday.
Kim Matula is continuing to keep busy since leaving her “The Bold and the Beautiful” role of Hope Logan (2010 to 2015). The actress joins her former daytime co-star Alley Mills (Pam Douglas) in the Indi film “Maybe Someday.” Matula plays Lacey, with Mills as Martha Donnelly, as the story centers on a 20-something slacker named Hal Donnelly (Michael McKiddy) who manages to get his life in order with the help of a girl claiming to be his daughter from the future. The film is currently headed to various festivals throughout the country.

Linda Gray in Hallmark’s June Weddings special.
Linda Gray played “The Bold and the Beautiful’s” Priscilla Kelly (Samantha’s mother) from 2004 to 2005. Best known for her “Dallas” role as Sue Ellen Ewing (1978 – 2014), the actress will star in Hallmark Channel’s June Weddings event in the movie “Perfect Match.” Gray plays Gabby, as two competing wedding planners are hired to help a couple with opposing visions have their perfect day. New attractions arise from the planning, which proves opposites do attract. Danica McKellar (“The Wonder Years”) and Paul Greene (“Bitten”) also star. Tune in Saturday June 20 at 9:00 PM. Watch a preview and see how Gray shared the filming location on Twitter.

Lunch in Vancouver while filming here for a Hallmark Movie. pic.twitter.com/9jTFPsz6py

Matthew Ashford teams up with fellow daytimers.
Matthew Ashford first entered the world of daytime as Drew Ralston on “One Life to Live” in 1982. He then went on to play Cagney McCleary on “Search for Tomorrow” in 1985, appeared as Tom Hardy on “General Hospital” in 1996 and returned to “One Life to Live” in 2003 as Dr. Stephen Haver. However, he’s most remembered for his “Days of our Lives” role as Jack Devereaux from 1986 to 2012 when his character fell to his death after pushing his daughter Abigail (Kate Mansi) out of an elevator that crashed during an explosion. He has signed on to play Jeremiah Jacobs in a new horror project alongside “The Bold and the Beautiful’s” Darin Brooks (Wyatt Spencer, “Days'” ex-Max Brady) and his fiancée Kelly Kruger (ex-Eva, “Y&R’s” ex-Mackenzie Browning). Ashford and Brooks co-wrote the project, along with David Michael Ross, that explores the evil as is described in the New Testament Books of the Holy Scriptures. Stay tuned for its title and release date. The actor also appeared on “The Bay” as Steve Jensen from 2011 to 2014.

Jack Coleman revives Noah Bennet in Heroes Reborn.
Who could forget “Days of our Lives'” Salem Strangler and the man who played the role from 1991 to 1992? Though Jack Coleman’s Jake Kositchek was apprehended, he died before he could stand trial and pay for his crimes. Coleman has had a very successful career over the years, having had roles on “Dynasty,” “Oh Baby” and “Kingdom Hospital.” Most recently he’s turned up on “The Vampire Diaries,” “The Office,” “Burn Notice,” “Scandal,” “Castle” and will soon bring his character Noah Bennet from NBC’s 2010 cancelation “Heroes” back to television through the thirteen-episode mini-series “Heroes Reborn.” The first episode titled “Awakening” will premiere the special run Thursdays this fall on NBC. Fans can expect storylines to reconnect with the show’s first season where normal people uncovered their special abilities.

Taylor Spreitler and Julie Marie Berman join Hulu’s Casual.
Daytime alums Taylor Spreitler (“Days of our Lives'” ex-Mia McCormick, 2009 to 2010) and Julie Marie Berman (“General Hospital’s” ex-Lulu Spencer, 2005 to 2013) will appear in Hulu’s ten-episode Lionsgate Television series “Causal,” directed by Jason Reitman. What happens when a bachelor brother and newly divorced sister from a dysfunctional family move in together to raise a teenager and coach each other through the world of dating? Look for Spreitler in five episodes as Mia and Berman as Leia for three. Stay tuned for its Hulu premiere later this year. The former “Days” actress currently plays Lennox Scanlon on “Melissa & Joey,” which airs Wednesdays at 8:00 PM on ABC Family.

Whatever happened to Brad Maule?
Soaps.com reader fansince1981 wondered what Brad Maule has been up to these days. The "General Hospital" and "Port Charles" alum, who played Tony Jones from 1996 to 2006, also had roles on "Passions" as Dr. Abel (2003) and "The Young and the Restless" as Reverend Palmer (2004). He recurred as George Smith on "7th Heaven" for three years and surfaced in various short productions thereafter. Most recently in 2014 Maule narrated the documentary "The History of Time Travel." He also taught musical theater and acting for the camera in the spring of 2006 at Stephen F. Austin University.

Missing Coop, where's Jason Gerhardt?
Fans have been asking after Jason Gerhardt, who played "General Hospital's" Cooper Barrett from 2007 to 2008. Since leaving daytime behind Gerhardt has guest-starred in such primetime series as "Melissa & Joey," "Perception," "Vegas" and "Bones." Most recently the actor played Zack Kilmer in ABC's "Mistresses" and Squad Leader Anthony Hurst in "CSI: Crime Scene Investigation" in 2014. He and his wife Chalae have four children together.

Ryan Brown, from daytime actor to storyteller.
Did you know? Fans have asked what happened to the actor who played "The Young and the Restless'" Billy Abbott in 2003. Ryan Brown has penned a few novels and short stories since leaving daytime. The son of best-selling author Sandra Brown (Rainwater, Mean Streak), the former actor published the thriller novels Play Dead in 2010 and Thawed Out and Fed Up in 2011, which are available on Amazon, and the short stories Suspended and Jeepers Peepers. Over the years he had guest roles on "Law & Order: SVU," the made for television movie "Inspector Mom: Kidnapped in Ten Easy Steps" and also played Harlan Billy 'Bill' Lewis, III on "Guiding Light" from 1998 to 2000. He's also a New York City-based photographer and is married to actress Victoria Arbiter ("Person of Interest"), whom he shares a son with. For more on his work visit Ryan M. Brown Photography.

Here's a recent tweet from Brown's mother of the two spending some time together.

Stephanie Erb lands Ray Donovan role.
Stephanie Erb will be recognized by "The Young and the Restless" fans for her 2014 role as Dr. Janice Mead, Sharon Newman's (Sharon Case) therapist. The actress has landed a recurring role as the head of the Fish and Game Department, Helen Miller, in season three of Showtime's crime drama "Ray Donovan." Keep an eye out for the new character as the series returns on Sunday July 12 at 9:00 PM. Erb has also had roles on "Weeds," "True Blood," "The Fosters" and "Girl Meets World," to name a very small few.

Yani Gellman in new ABC series Blood and Oil.
With all of the crime throughout Genoa City these days, the residents could use a visit from Attorney Rafe Torres. However, there are no plans for Yani Gellman, who played the role from 2008 to 2010, to return to "The Young and the Restless." Don't worry fans, we have found another outlet for you to get your Yani Gellman fix. The actor will be playing A.J. Menendez in the upcoming ABC series "Blood and Oil," starring Don Johnson ("Eastbound & Down," "Nash Bridges," "Miami Vice") and Amber Valletta ("Revenge"). What's being labeled as a primetime soap opera, the premise follows a couple who plans to make a fortune on the current North Dakota oil boom. The show will premiere during the 2015/2016 fall line-up Sundays at 9:00 PM. Chace Crawford ("Gossip Girl") and Rebecca Rittenhouse ("Red Band Society") also star.

When you mix oil and money, the results are explosive! Watch the trailer for #OILabc now! #ABCUpfront

"One Life to Live" alum (ex-Nash Brennan) Forbes March is in the firewood business, another former actor of canceled soaps is starring in "American Crime Story," based on the O.J. Simpson murder trial, and get more scoops in our original Where Are They Now column.

Our Search option on Soaps will help you find other career highlights for former daytime actors. Just search their name or character and leave any future requests in the comment section.