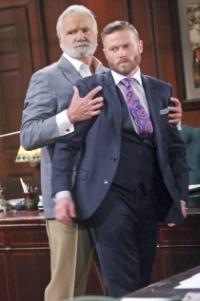 It’s a struggle to keep things from coming apart.

The Bold and the Beautiful:
Although Bill and Justin are pleased with themselves after their little coup over Forrester, Katie is not happy at all. While she lays into Bill over what he’s done, Nicole lays into Wyatt for betraying her trust. Rick struggles to keep Forrester together as the scandal spreads. Eric warns him that his place in the company could be doomed. And Ridge gets a shock when he learns why Caroline has been gone for so long. Check out The Bold and the Beautiful Spoilers to discover what Maya decides to do about her future.

Days of our Lives:
After JJ’s trap for Eve leaves her terrified, she starts lashing out at Jennifer. By the end of the week, Paige’s surprise party turns into a disaster that destroys her relationship with JJ. Meanwhile, Serena does her best to escape Nicole’s trap and plans to get Eric out of town. When Will returns to Salem, he’s shocked by what he walks in on and immediately starts manipulating the situation. And Kimberly comes back to town with some news for Theresa. Read the Days of our Lives Spoilers to find out who starts doubting Stefano’s intentions.

General Hospital:
A wedding day turns into a sad occasion. Olivia tells her son the bad news and makes plans for her future. Meanwhile, Anna and Sloane get closer and she asks him for a favor. He might need one himself when Jake starts demanding to be released from their deal. Across Port Charles, Jordan tells TJ what she’s really been up to since she came to town. He takes the news a lot better than Shawn is going to. Read Soaps.com’s General Hospital Spoilers to learn who gets into a bitter argument with Morgan.

The Young and the Restless:
As Sharon wonders about her future with Dylan, Paul spreads the news that he’s already found a match for the killer’s traces. After making his big confession, Fen lashes out at Michael and Lauren. Michael doesn’t shy away from lashing out himself. Meanwhile, Victoria and Adam squabble while Victor sets his sights on Neil and things look increasingly grim for Jack. Across Genoa City, Phyllis has some serious doubts about what Joe really has planned for Avery. Visit The Young and the Restless Spoilers and find out what happens when an uninvited guest crashes the big merger. 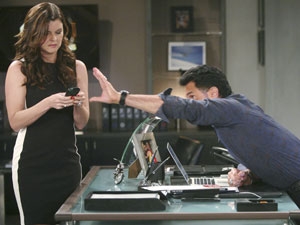