Missing Salem's Philly K?
PennyRose wondered if Jay Kenneth Johnson (Philip Kiriakis) would be returning to "Days of our Lives" for the 50th anniversary. Though there's no news yet on whether or not Johnson will return for the special event, the actor has turned up a few times since his run on "DOOL" from 1999 to 2011. He appeared as Anthony on "Melissa & Joey" in 2011 and as a spoiled rich boy named Chip in "Undercover Bridesmaid," which fans can still catch on the Hallmark Channel from time to time. Most recently Johnson played Gabe in Runaway Hearts, starring Ali Landry (ex-Amur "B&B," ex-Kenzie "Sunset Beach").

Bring back Peter Blake!
What would it be like to have Peter Blake back in Salem? That would be up to the show's casting department, but his fans will be happy to know actor Jason Brook has kept plenty busy since his "Days of our Lives" (1993 to 1996) role. Brook moved on from daytime and appeared in numerous primetime series and made for television movies such as "Friends," "The Pretender," "Baywatch," "Charmed," "CSI," "Switched at Birth" and "The Perfect Boyfriend." In 2015 the actor played J.D. Miller in "Guilt by Association" and a bounty hunter named Jason in "Intrepid."

Checking in with GH's Real Andrews.
Real Andrews has stated on numerous occasions his love of fishing and the former "General Hospital" and "Port Charles" actor (ex-Marcus Taggert, 1998 to 2003) currently spends time with his wife Michele as a motivational speaker, success coach and is really into health and fitness. Fans are encouraged to follow @realandrews on Twitter and get motivated today. Over the years, Andrews also had daytime roles on "Days of our Lives" (ex-Robert Perry, 1995), "Santa Barbara" (ex-Danny Guerra, 1992), "As the World Turns" (ex-Walker Daniels, 2003 to 2004), "All My Children" (ex-Agent Trumbull, 2011) and most recently played Dr. Keith Campbell on the web series "The Bay" (2010 to 2014). Watch the video below where the actor gives advice for all parents on how to have a positive effect on your child's future.

GH's John Stamos confirms Fuller House on Netflix.
John Stamos ("General Hospital's" ex-Blackie Parrish, 1982 to 1984) went on "Jimmy Kimmel Live" on Monday April 20 and confirmed that a much anticipated "Full House" reunion will take place via Netflix through "Fuller House." Watch his video confirmation where Stamos talks about the special that will lead them into the spin-off and sheds light on who from the original cast will join him (as Jessie) in the series and says, "If we can't get the Olsen twin we'll…"
[youtube https://www.youtube.com/watch?v=aSRC2KLNkd4&w=340&h=260]

Y&R's Jeff Branson and Eva Longoria share Visions.
Former "The Young and the Restless" alums Jeff Branson (ex-Ronan Malloy, 2010 to 2012) and Eva Longoria (ex-Isabella Brana Williams, 2001 to 2003) will team up in the 2016 horror flick "Visions." The story surrounds a pregnant woman (Isla Fisher, "Arrested Development") who begins experiencing horrific visions after moving to a vineyard to reunite with her husband (Jim Parsons, "The Big Bang Theory"). Look for Branson as Glenn with Longoria as the good friend of Fisher's character.

What ever happened to Y&R's Stephanie Williams?
Deborah R. takes us way back in time wondering what the actress who played "The Young and the Restless'" Amy (Traci's friend from the 80s) has been up these days. Stephanie Williams played Amy Lewis from 1984 to 1986, a character who worked at Paul and Andy's PI firm, taught Nathan Hastings to read and sang with Danny, Lauren and Traci. After that she crossed over to ABC soaps and went on to play Dr. Simone Ravella Hardy on "General Hospital" (1990 to 1993) and Sheila Price Gannon on "One Life to Live" (1995). Unfortunately, we haven't seen much of the actress since a 2000 guest role on "Pay the Price" but included a flashback photo of her Genoa City character along with law student Tyrone Jackson (played by Phil Morris, "Love That Girl!") who went undercover as a white man in the mob.

Please Note: We view all of our readers' inquiries about past soap stars from current soaps. If we don't answer all of your questions in the column, stay tuned to future ones and use our Search option on Soaps to look up actor/character names in case we've already reported on them. Keep in mind, some actors may not have anything new to report since leaving daytime. As always continue to leave your requests and we'll look into any updates we don't already have. 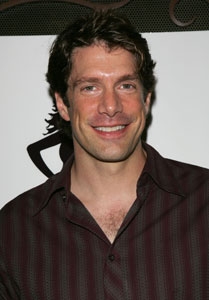 Ever wonder what some of the actors who used to play on “The Bold and the Beautiful,” “Days of our Lives,” “General Hospital” and “The Young and the Restless” have been up to these days? Soaps.com readers have requested that we touch base with such actors, which we will do twice a month.

B&B’s Mackenzie Mauzy lives on in Forever.
Mackenzie Mauzy’s “The Bold and the Beautiful” character Phoebe Forrester may have died in a fatal car accident back in 2008 but the actress can currently be seen in ABC’s drama “Forever.” The series follows a two-hundred year old man named Dr. Henry Morgan (Ioan Gruffudd) who tries to unlock the curse of his immortality by working in a New York City morgue. Mauzy’s recurring character Abigail Morgan and Henry’s journey began years ago when they married but she left him due to the age difference, as he remained young and she grew older. Tune in Tuesdays at 10:00 PM.

Thank you for all of the #Forever love tonight!You guys are the best! @ForeverABC #RenewForever

B&B’s Jack Wagner reprises Hot In Cleveland role.
Jack Wagner (“B&B’s” ex-Nick Marone, “General Hospital’s” ex-Frisco Jones) will soon return to TV Land’s “Hot in Cleveland.” The actor first appeared on the comedy in February 2011 as Dr. Aaron Everett and again in July 2013. Keep an eye out in June for Wagner in episode twenty-four of the current sixth and final season. Check your local listings for dates and times in your area. Former soap star and this year’s Daytime Emmy Lifetime Achievement recipient Betty White (“B&B’s” ex-Ann Douglas) stars. Wagner can also be seen Sundays at 8:00 PM in season two of the Hallmark Channel original series “When the Heart Calls” as Bill Avery. On May 1 he appeared on the Hallmark Channel’s “Home & Family” to talk about the network’s series.

Lesley Anne Down joins Steven Seagal in Absolution.
Lesley Anne Down hasn’t appeared on “The Bold and the Beautiful” as Jacqueline Payne Marone since February 2012, a role she created in 2003. The actress is keeping busy and will turn up as Zvetlana in the new film “Absolution,” starring Steven Seagal and Vinnie Jones. Fans can expect an action-filled story, as a contract killer (Seagal) is faced with protecting a girl from a mob boss (Jones) or remaining loyal to the people who hired him. Look for the release in select theaters and On-Demand on May 15. Down will also appear in the upcoming 2015 projects “The List” (as Victoria), “Kill me, Deadly” (Lady Clairmont), “Of God and Kings” (Madame Renard) and “In Extremis” (Sister Clare).

Check out Steven go head to head w/ #VinnieJones in the trailer for #ABSOLUTION! In Theaters & On Demand May 15th! http://t.co/lc6m5vuEO5

Days’ Chandler Massey in Butterfly Caught.
Chandler Massey played the role of Will Horton from 2010 to 2014 before leaving “Days of our Lives,” to which Guy Wilson stepped into the role not long after. The actor will turn up as Terry in the independent film “Butterfly Caught.” Three women, with different qualities, set out to break into the acting world and are faced with all of evils and temptations that go along the journey. Stay tuned for its May 2015 release. Abigail Klein, who plays one of the lead roles, has a daytime connection as well and appeared on “Y&R” in 2011 as a Genoa City nanny. 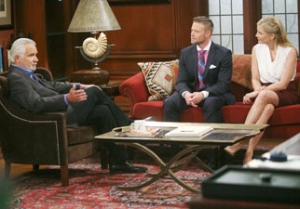 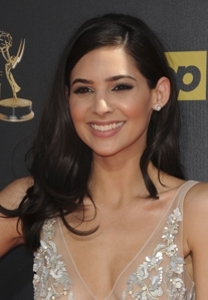