General Hospital:
Franco called Nina from jail and was stunned when she handed the phone to Heather at Shadybrook. He ordered Heather away from Nina, but she threatened to crush her as payback then told Nina Franco was her son. At Pentonville, while Julian and Ava joined forces to escape, Shawn told Sonny Bill's grave was empty. Over talk of Fluke with Julian, Sonny agreed to team up with Ava and was forced to let Franco join in as they all escaped the prison. At the Port Charles Cemetery, Fluke spotted Bill's open gave then made his way to the Spencer house where he pushed Dante down the basement stairs. Helena summoned Jake to the graveyard and gave him another mission. While Jake planted a bomb at the Haunted Star, prior to Nathan arresting him, Fluke planted one in the Spencer basement. When Dante awoke, he found the bomb strapped to a corpse. Read our General Hospital Daily Recaps to hear what Helena had to do to stop Nic from going to the Haunted Star.

The Young and the Restless:
Dylan warned Avery he'd kill Joe if he kept pushing him. Joe privately offered to back off if Avery gave him one night of sex. Avery, wearing a wire, went to Joe's suite hoping for a confession. Elsewhere in Genoa City, Sharon informed Nick Faith would be put on the stand during their custody suit. Later, while Sage admitted to Nick that Gabriel was her husband of convenience, Billy and Gabriel bonded over their hatred for Victor. Jill went to Victor with the money Colin blackmailed from Devon. He refused the 'down payment', demanded the full asking price and threatened to sell it to the highest bidder. Victor then stole Ashley's formula to launch Brash & Sassy. Though Vikki initially lied for Victor about the formula, she ordered him to return it or risk being cut from Katie's life. Victor returned it, except for one drop. Read The Young and the Restless Daily Recaps to learn why Phyllis packed her bags and was later arrested.

Steffy returned on “B&B.” Clyde was shot on “Days.” Heather threatened Franco on “GH,” and Phyllis was arrested on “Y&R.”

The Bold and the Beautiful:
Maya caught Brooke up to speed on Rick’s CEO position, their relationship and how Caroline cheated with Ridge. It wasn’t long before Bill arrived and informed Brooke of his and Katie’s reunion. Over at Forrester, Ridge protected Caroline from Rick’s gunfire. Rick felt justified in firing the shot to prevent Ridge from ‘defiling Caroline’. After Caroline stopped Ridge from calling the cops, she signed Rick’s divorce papers. Ridge took a call from an angry Brooke, who learned of Rick’s actions and worried about the stress he was under. Caroline and Ridge threatened to press charges if Rick didn’t step down as CEO. In his bed, Liam professed his love to Ivy then later told Bill he wanted to take over Forrester Creations. When Steffy returned home, Liam asked for her help. Read The Bold and the Beautiful Daily Recaps to find out what Pam took the liberty of doing for her and Donna.

Days of our Lives:
Clyde bailed Ben out of jail and promised he wouldn’t do time for his crime. Elsewhere, Chad was cold to Jordan then took a call from Stefano, who ordered him to seduce Abigail. Though Chad agreed, he listened to Jordan’s side of the Rafe-kiss story and promised to make things right with her and Ben. After Victor’s thug shot Clyde in the Salem Park, he agreed to Abby’s request to hire Ben at The Edge of the Square. Nicole conned her way into Serena’s place to ‘clear the air’ and managed to download her laptop files. After Serena realized what Nicole had done, she and Eric confronted Nicole at Daniel’s, where the contents of Serena’s files were revealed. Kate met Will at TBD and learned he cheated on Sonny with Paul. Over at the hospital, Melanie eavesdropped on Clint taking a call with Dr. Mandrake and discussing Theresa. Read our Days of our Lives Daily Recaps for Theresa’s reaction to Brady and Melanie dating. 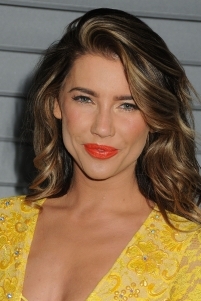