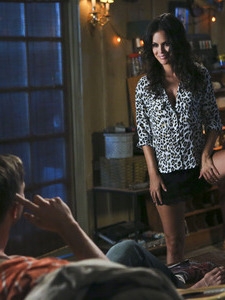 Soaps.com has a big CW return for the week of December 15 as well as saying goodbye to a talk show legend, holiday episodes and classics, baby news, a TNT renewal, a FOX interview, show teasers, casting and more in our latest Primetime Dish column…

Bones:
Emily Deschanel, who stars as Bones in the FOX series, and David Hornsby (“It’s Always Sunny in Philadelphia”) are expecting baby number two! Her first pregnancy was written into the series and TVLine has learned that the show plans to do the same for her second one.

Interview! Soaps.com sat in on a conference call with Producer Stephen Nathan. When asked how he came up with the details for the FOX series’ 200th episode Nathan shared, “Well, I think coming up conceptionally with this, we wanted to go back to something that was classic because after ten years, we’re moving into the classic category; not many shows last for 200 episodes. I think there have only been 24 dramas in the history of television from what I’ve been told. We wanted to do a classic examination of the show and of the romantic nature of the show. This style, this time, really sets it apart and allows us to highlight that aspect of our series in a way no other time really could. We also got a chance to reintroduce Booth and Brennan, see the initial attraction and the blossoming of their romance, again, in new circumstances.” Tune in for the milestone episode titled “The 200th in the 10th” on Thursday December 11 at 8:00 PM.

Fargo:
Kirsten Dunst (“Spider-Man” films) and Jesse Plemons (“Breaking Bad”) have landed leading roles on the FX series. Look for Dunst to star as a beautician named Peggy Blomquist with Plemons as her butcher’s assistant husband Ed in season two, which will consist of ten episodes and return in the fall of 2015.

Greatest Holiday Commercials Countdown:
On Wednesday December 17 at 8:00 PM the CW will air a repeat of its December 1 special, which celebrated the top twelve best holiday commercials.

Hart of Dixie:
Season four premiere! It’s all about second chances in the CW’s December 15 8:00 PM season premiere episode titled “Kablang.” Monday episode teasers: Zoe is overjoyed by Wade’s decision to stay in BlueBell but struggles with romantic gestures aimed at him. Brick is visited by someone from his past, and George and Lavon are on the outs, due to both wanting Lemon.

We kicked off our iHeartRadio Jingle Ball Tour with a bang last night at #KIISJingleBall! ? http://t.co/OykRR3ZTSa pic.twitter.com/pQVRqBJvD7

Jane the Virgin:
Singer Paulina Rubio guest stars in the CW’s December 15 episode titled “Chapter Nine.” Monday episode teasers: Jane and Rafael discover one of Petra’s shocking secrets and become concerned about her true intentions with the baby. Rogelio is nominated for a Best Actor award and invites Jane, Alba and Xo to be his guests at the show. Xo refuses to give up on her dreams after meeting her idol Paulina Rubio, and Michael reveals a major clue in his ongoing investigation.

Late Show With David Letterman:
Final air date. David Letterman will say goodbye, as “The Late Show’s” final broadcast will air on CBS on Wednesday May 20, 2015 at 11:35 PM. The show currently airs weeknights at 11:35 PM and first debuted on August 30, 1993.

“David Letterman has given to all of us a remarkable legacy of achievement and creative brilliance that will never be forgotten,” said Leslie Moonves, President and CEO of the CBS Corporation. “It’s going to be tough to say goodbye, but I know we will all cherish the shows leading up to Dave’s final broadcast in May.”

Mr. Magoo’s Christmas Carol:
On Friday December 19 at 8:00 PM the CW will bring viewers the 90-minute animated adaption of the Charles Dickens classic – the first ever produced for television in 1962. Jim Backus will voice as Mr. Magoo throughout the Christmas ghost story surrounding Ebenezer Scrooge.

Rizzoli & Isles:
Renewed! The TNT series will return for a sixth season. Viewers can expect eighteen new episodes to air in the summer of 2015.

Scorpion:
In CBS' Monday December 15 9:00 PM episode titled "Dominoes," rising tides threaten a young boy's life on Christmas Eve, as Team Scorpion races to find a way to save him from drowning in a beachside cave.

The 100:
It's an eye for an eye in the CW's December 17 9:00 PM episode titled "Spacewalker." Wednesday episode teasers: Clarke delivers devastating news to those at Camp Jaha. Finn struggles with the fallout of his actions. Abby prepares for a fight after receiving information from an unlikely source, and flashbacks explain Finn and Raven's relationship on the Ark.

The Flash:
On Tuesday December 16 at 8:00 PM the CW will air a repeat of its October 28 episode titled "Going Rogue."

The Originals:
The CW series is currently taking its mid-season break until January 2015. While we wait for its return watch the promo for what's to come and get to know a few of the castmates as they answer questions about themselves…

Two and a Half Men:
In CBS' Thursday December 18 9:00 PM episode titled "Clockwise in Back Hole Until Tight," Rose returns, as Walden and Alan work to convince Louis that Santa Claus is real.

Two Broke Girls:
In CBS' Monday December 15 8:00 PM episode titled "And a Loan for Christmas," Max and Caroline plan to mass-produce their cupcake T-shirts at high-end boutiques by getting a bank loan, and Sophie's contest entry has the diner gang posing in Chestnut's barn.