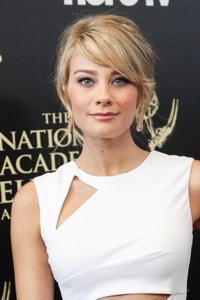 November casting news included a CBS soap crossover, some exits, some blasts from the past returning, and also some contract moves.

The Bold and the Beautiful:
November saw the return of Fred Willard as John, Hunter Tylo as Taylor, Schae Harrison as Darla’s ghost, and Kelly Kruger as Eva. A previous casting call for ‘Camille’ was revised to ‘Janie’, a crafty and intelligent young woman in the 18 – 22 year age range. Also last month, Judith Chapman crossed over from “The Young and the Restless” as Gloria, Patty Dyrdek played a Spencer employee, Raphael Thompson debuted as Matt, JPI’s Sean Smith appeared as a photographer, and Dutch entertainer Ferry Doedens guest-starred as a Forrester PR person during the Amsterdam scenes. Katherine Kelly Lang’s Brooke remained off canvas as the actress fulfilled her commitment to “Dancing With the Stars Italy,” and fans learned that Kim Matula had elected not to renew her contract and would be leaving as Hope Logan. Find out her last airdate through The Bold and the Beautiful Comings and Goings.

Days of our Lives:
Salem’s November comings and goings included Sal Landi’s appearance as Dr. Mandrake, Michael Sun Lee’s debut as Paul’s agent Satoru, and Tom Choi’s stint as Dr. Chung. Drake Hogestyn left for a brief time as John went overseas on business. Looking ahead, Melissa Archer is set to debut as Serena on December 5, Wally Kurth is due back as Justin around February, and Chrishell Stause leaves the canvas as Jordan in March 2015. Eileen Davidson, who recently left the show, will return as Kristen in 2015 as well. Find out when she’ll appear through Days of our Lives Comings and Goings.

General Hospital:
In Port Charles casting, Anthony Geary returned to the screen as Luke in November and news broke that Brandon Barash would be coming back as Johnny, although no first airdate was given. Betsy Franco, actor James Franco's real-life mother, will also return as Franco's adoptive mom. Marc Anthony Samuel announced that he is on recurring, not on contract, as Felix, and Kelly Thiebaud moved from contract to recurring status as Britt. Read more about the reasons for this change through General Hospital Comings and Goings.

The Young and the Restless:
Genoa City's November casting moves saw Justin Hartley debut as Adam Newman, Sally Kellerman begin her multi-episode run as Constance, Gerald Downey appear as Dr. Ramsey, and Max Page return as Reed. Jennifer Gareis reprised her role of Grace for three shows, and Julianne Morris Polaha was back as Amy for one. Steve Burton signed a new contract that will keep him around for another year as Dylan, and Judith Chapman crossed over to "The Bold and the Beautiful" as Gloria for an episode. Looking ahead to December, James Clow will play Dr. Larson, Robert Gant returns as David Sherman, Nadine Nicole debuts as Gwen, and Jeffrey Christopher Todd first appears as Tobias. Find out where he'll be working through The Young and the Restless Comings and Goings.