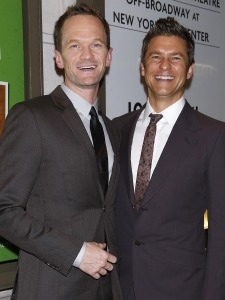 Soaps.com has news surrounding extra episode orders for a few series for the week of November 3, as well as teasers, casting, tons of “Sleepy Hollow” Halloween events and more in our latest Primetime Dish column…

American Horror Story Freak Show:
TVLine is reporting that real life married couple and “How I met Your Mother” alums Neil Patrick Harris and David Burtka have landed guest roles in the FX series. Look for Harris as a chameleon salesman in the last two episodes and Burtka during the finale in scenes with Jessica Lange, who plays Elsa Mars. Tune in Wednesdays at 10:00 PM.

Arrow:
In the CW’s Wednesday November 5 8:00 PM episode titled “The Secret Origin of Felicity Smoak,” Oliver and Felicity are pushed to their limits following the cyber attack on Starling City. Donna visits her daughter, Felicity. Laurel’s motives are questioned by Ted Grant, and Oliver becomes furious when Thea uses Malcolm’s estate money to buy an apartment.

Cedar Cove:
Renewed! The Hallmark Channel has renewed its first original series for season three. Andie MacDowell stars as Olivia Lockhart with Dylan Neal (ex-Dylan, “B&B”) as Jack Griffith. “I am so in love with the rich wholesomeness of ‘Cedar Cove,'” said MacDowell. “The well-rounded storytelling delivers my character with a sensible balance of tenacity and serenity. I am so very grateful to Hallmark Channel for a third season and cannot wait to rejoin the cast and crew to continue making the kind of television which we can all be proud of.”

In casting news… Beginning in early 2015 Morena Baccarin (“Homeland”) will appear in the recurring role as Dr. Leslie Thompkins.

It's true guys! Back to my old NYC for GOTHAM! Very excited!

In other news… ABC has given “Grey’s Anatomy” two additional episodes for this season.

Wish I could pack this baby up and take it to Hawaii! The @BabyBjornUS I mean, I'm taking the baby. pic.twitter.com/XdRGM0RgkP

Jane the Virgin:
In the CW’s Monday November 3 9:00 PM episode titled “Chapter Four,” Jane is overwhelmed with wedding plans and confesses her emerging feelings for Rafael to Michael. Rafael and Petra aren’t happy having to deal with people from their past, and Rogelio pushes Xo to allow him to be a part of his daughter’s wedding.

Marilyn:
Lifetime’s upcoming four-hour miniseries surrounding the life of Marilyn Monroe has cast its lead. Kelli Garner (“Pan Am”) will star as the sex symbol in the special based on the book The Secret Life of Marilyn Monroe by Randy Taraborrelli, set to air sometime in 2015.

Reign:
In the CW’s Thursday November 6 9:00 PM episode titled “Three Queens,” Queen Mary and Catherine are forced to abandon their carriage and escape into the woods, where they conceal their true identities. Francis, Leith and Condé form a search party, and Lola considers a complicated yet intriguing offer from Lord Narcisse.

Sleepy Hollow:
Mini-marathon! On Saturday November 1 FOX will air a Sleepy Hollow-een mini-marathon to include a replay of the recent episodes “The Weeping Lady,” “Go Where I Send Thee” and “And the Abyss Gazes Back.” Please check local stations for times.

Halloween takeovers! "Sleepy Hollow" will celebrate across the country through a series of spook-tacular events, including takeovers of New York pumpkin patches and Halloween parades. On Friday October 31 fans can stop by Union Square for free pumpkins, treat bags, goodies and photos with the "Sleepy Hollow" Headless Horseman. Also, keep an eye out for the Headless Horseman if you attend any of these parades: New Orleans' Krew of Boo Parade on October 30 and on October 31: New York's Greenwich Village Parade, Los Angeles' West Hollywood Parade, Chicago's Northaldsted Parade on October 31 and Miami's Lincoln Road Parade. Be sure to snap a photo if you spot Headless and upload it with the hashtag #SleepyHolloween.

Ghost car! If you need a 'lyft' on October 31 and are in New York, Los Angeles or San Francisco use the Lyft app between 6:00 PM and 10:00 PM, try to locate a special "Sleepy Hollow" 'Ghost Car' and hop in. Those lucky enough to do so will get a free ride and an escort by the Headless Horseman himself.

Then... In FOX's Monday November 3 9:00 PM episode titled "Deliverance," the attack against Katrina begins to flourish. Abraham is unaware his love's sickness is the result of his demonic compatriot. Katrina escapes and is soon found by Ichabod and Abbie. And Crane turns to Benjamin Franklin's notebooks for a cure.

Sons of Anarchy:
In FX's Tuesday November 4 10:00 PM episode titled "What a Piece of Work is man," the club experiences conflict and heartache.

Supernatural:
On Tuesday November 4 at 9:00 PM the CW will air a repeat of its October 6 special titled "A Very Special Supernatural Special."

The 100:
Nothing is what it seems in the CW's November 5 9:00 PM episode titled "Repercussions." Wednesday episode teasers: Clarke joins forces with an unlikely ally after uncovering a horrifying project in Mount Weather's medical ward. Kane orders to have Abby brutally punished following her confession. Jasper learns Clarke could be in trouble, and Octavia fights for Lincoln.

The Flash:
On November 4 at 8:00 PM the CW will air the episode titled "Things you Can't Outrun." Tuesday episode teasers: Barry and the team at S.T.A.R. Labs revisit the night Ronnie was killed as they try to capture Kyle Nimbus. Iris and Eddie continue to keep their relationship hidden. Joe visits Harry in jail, and Kyle wants revenge for being arrested years ago.

In casting news... The Hollywood Reporter has learned that Malese Jow ("The Vampire Diaries") will appear during episode twelve as a reporter named Linda Park. The actress tweeted her character's bio below:

The Originals:
Read The Originals Spoilers to find out why "The Vampire Diaries'" Nina Dobrev (Elena) will appear in flashbacks, why Cami is in danger and more in the CW's Monday November 3 8:00 PM episode titled "Red Door."

In casting news… TVLine has learned that Debra Mooney ("Scandal," "Everwood") has landed a recurring role on "The Originals" as a very protective werewolf named Mary. The actress will first turn up in episode eleven.

The Vampire Diaries:
Read The Vampire Diaries Spoilers to hear what Alaric asks Elena to do, what upsets Damon and more in the CW's Thursday November 6 8:00 PM episode titled "The More you Ignore me, the Closer I get."

The Walking Dead:
In AMC's Sunday November 2 9:00 PM episode titled "Slabtown," a darkside awaits a group of survivors even though things appear to look nice and safe.

True Detective:
Taylor Kitsch ("Friday Night Lights") has landed the role of Paul Woodrugh for season two of the HBO series, which will premiere during the summer of 2015. Matthew McConaughey stars as Detective Rust Cohle alongside Woody Harrelson as Detective Marty Hart.