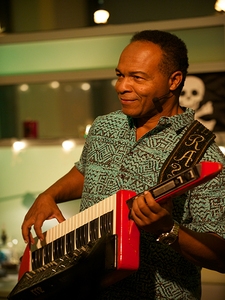 Soaps.com has some Halloween fun for the week of October 27, as well as episode teasers, an interview, a TNT family reunion of sorts, casting and more in our latest Primetime Dish column…

A to Z:
On Thursday October 30 at 9:30 PM NBC’s special episode titled “E is for Ectoplasm” will have Andrew and Zelda breaking annual traditions in order to host a huge Halloween party. Ray Parker Jr., singer of the “Ghostbusters” theme song, will guest-star as himself.

About a Boy:
In NBC’s Tuesday October 28 9:30 PM episode titled “About a Will-O-Ween,” Will shows Marcus the joys of Halloween during his annual ‘Will-O-Ween Bash’.

Arrow:
In the CW’s Wednesday October 29 8:00 PM episode titled “The Magician,” Oliver is confronted by Nyssa and suspects Merlyn killed her. Oliver and Nyssa work together to bring Sara’s killer to justice. Laurel steers clear of Nyssa. Thea returns home, and Nyssa and her father discuss Oliver.

Gotham:
In FOX’s Monday October 27 8:00 PM episode titled “Spirit of the Goat,” the first born of Gotham’s elite is targeted by a killer. Bullock recalls a similar case and is forced to face traumatic memories. And past demons confront Gordon as well.

Grey’s Anatomy:
The ABC series will not be seen on Thursday October 30 due to a special airing of “It’s the Great Pumpkin, Charlie Brown.” Tune in on Thursday November 6 when the show resumes, as Soaps.com will post the episode recap thereafter.

House of Cards:
TVLine has learned that Kim Dickens (“Sons of Anarchy”) will recur on the Netflix series. As of yet there are no character details. Look for season three to return in early 2015.

Major Crimes:
TVLine has learned that Zarah Mahler (“Manson Girls”) will turn up in the December 22 episode as Emily Raydor, Sharon’s (Mary McDonnell) daughter. Ryan Kennedy will return as Sharon’s son Ricky as well, making it quite the family reunion. Stay tuned for season three of the TNT series to resume this winter.

Marry Me:
In NBC’s Tuesday October 28 9:00 PM episode titled “Scary Me,” though Jake and Annie plan to host a haunted house in their apartment, Julie makes things difficult for them.

Orphan Black:
The BBC series is likely to return next spring and is currently shooting season three in Toronto until March 2015. Via a press release the show teases, “Season three plunges the clone sisterhood into unexpected territory with the realization that they’re not alone. Just when they thought they knew their enemies and allies, season three reveals our clones are more vulnerable than ever before. Highly trained, identical male-soldiers raise more questions than answers. Who are these new clones? Who created them? And more importantly, why do they exist? Sarah, Cosima, Alison and Helena are stronger together than they are apart, but this season will put that bond to the test. Will they forge towards their truth, or fall at the feet of those who seek to control them?”

Reign:
In the CW's Thursday October 30 9:00 PM episode titled "Blood for Blood," Mary and Francis must intervene on the eve of Greer's wedding, due to bloodshed at a Protestant service. Castleroy's union with Greer could be destroyed after a surprising secret is uncovered. Francis' dead father manages to send him a gift, and Kenna finds a sex journal.

Schitt's Creek
POP Network (currently TVGN) will bring viewers its first original scripted project to U.S. and Canada markets in early 2015. Created by and starring Eugene Levy ("American Pie"), the character-driven comedy series will consist of thirteen half-hour episodes and will follow a family who once used to joke about the small town of Schitt's Creek until they became broke and were forced to move there. The main characters will include a formerly filthy rich video store magnate Johnny Rose (Levy), his soap star wife Moira (Catherine O'Hara), and their two kids, über-hipster son David (Daniel Levy) and socialite daughter Alexis (Annie Murphy).

"It took a very special project like 'Schitt's Creek' to bring me back to television," said Levy. "I'm thrilled to be reunited on-screen with my dear friend Catherine O'Hara and to have the opportunity to work with the wonderfully hilarious Chris Elliot, the up-and-coming Annie Murphy, and my son Dan, who is amazingly talented and a great partner - working together has only made me look better."

"This show answers the question - what would the Kardashians do if they woke up one day completely broke?" said Brad Schwartz, President of Entertainment and Media, POP. "Not only is this project a clever cultural commentary where the 1 percent is suddenly the 99, but it fits right in the heart of everything we're building at our new network. It's a dream cast, it's hysterically funny, and it’s sure to pop."

Though the Schitt's Creek trailer has been released, it may not be viewable in all countries.

Sleepy Hollow:
In FOX's Monday October 27 9:00 PM episode titled "And the Abyss Gazes Back," Ichabod and Abbie find Joe Corbin at a local pub and are later attacked by a wolf-like creature. Suspicion surrounds Joe. And Frank Irving realizes he must trade another soul for his own in order to break the contract with Henry Parrish.

Interview! During a conference call with Matt Barr, who plays Nick Hawley, the actor shared what initially drew him to the role. "I think it was the fact that the little boy in me always wanted to be a treasure hunter; it's like I wanted to be Hawley. I did, I wanted to be Indiana Jones; so I guess that was it. I can live vicariously through this character, so I get to enjoy my day job." He went on to explain a bit about how his character's relationships with Abbie (Nicole Beharie) and Ichabod (Tom Mison) will develop in the coming episodes. "As Hawley, as he realizes that in his efforts to take care of himself, he realizes that he needs Ichabod and Abbie for his own self-preservation so, ironically, it's even selfish of him that he realizes in order to survive the apocalypse he might have to join the Scooby Doo gang in order to survive. I think he knows that he needs them as much as they might need him. In that experience, he might bond a little bit with these guys."

Sons of Anarchy:
In FX's Tuesday October 28 10:00 PM episode titled "The Separation of Crows," a missing member cannot be found, which leads to an attempt to locate an internal rat.

Supernatural:
On October 28 at 9:00 PM the CW will air its episode titled "Paper Moon." Tuesday episode teaser: A surprise culprit is the suspect of a recent string of werewolf attacks.

The 100:
In the CW's Wednesday October 29 9:00 PM episode titled "Inclement Weather," Clarke demands answers from President Dante Wallace. A member of The 100 is interrogated by Kane. Abby rushes to save someone, and Octavia is on the hunt for Lincoln.

The Flash:
Full season orders, more action-filled episodes on the way! On October 28 at 8:00 PM the CW will air the episode titled "Gone Rouge." Tuesday episode teasers: The Flash chooses to save a guard, as the culprits rush to get away. Barry later identifies Leonard Snart as the group leader. Felicity Smoak surprises Barry with a visit. The Flash and Captain Cold have a grand confrontation. Dr. Wells becomes furious with Cisco, and Joe gives Iris the cold shoulder.

In casting news... Get the details on "General Hospital's" (Franco) Roger Howarth's The Flash role.

The Good Witch:
James Denton ("Desperate Housewives," "Stranded in Paradise") has been cast to play a doctor and will star alongside Catherine Bell as Cassie Nightingale in the Hallmark Channel's original series, which will include ten episodes and will debut in 2015. Also, the seventh installment of the films, "The Good Witch's Wonder," will air on Saturday October 25 at 9:00 PM.

The Originals:
Read The Originals Spoilers to find out why Davina goes into hiding, what Cami does to get to know Klaus better and more in the CW's Monday October 27 8:00 PM episode titled "Live and let die."

The Vampire Diaries:
Read The Vampire Diaries Spoilers to learn why Caroline is preoccupied, what could hurt Damon and Bonnie's chances of returning home and more in the CW's Thursday October 30 8:00 PM episode titled "The World has Turned and Left me Here."

The Walking Dead:
In AMC's Sunday October 26 9:00 PM episode titled "Four Walls and a Roof," Rick and the others go head to head with a malicious group.

In casting news… Alexandra Breckenridge ("American Horror Story") has landed a recurring/possible contract role. Deadline has learned the character breakdown is described as a strong, articulate, charming, attractive mother named Samantha, who's an artist with a bohemian spirit.

So lucky to be able to work with such awesome people on such a killer show! #TheWalkingDead