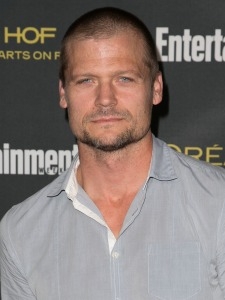 Remembering a writer, an actress and a child actor, a Hallmark movie, actors reunite onstage, a cabaret, watch a new short film and more…

Cameron Mathison: Soap star turned nanny?
Cameron Mathison, who originated the role of “All My Children’s” Ryan Lavery (1998 to 2011), will have another Hallmark movie under his belt come October. The actor will star in “Along Came a Nanny” as a detective named Mike Logan who plans to solve a case of neighborhood robberies by going undercover as a nanny. However, his character never planned on falling for a fellow nanny named Jessie White (Sarah Lancaster, “Chuck”). Be sure to mark your calendars, as the movie premieres at 9:00 PM on Sunday October 12.

Bailey Chase Chicago’s newest DEA agent.
Remember “As the World Turns'” Chris Hughes, played by Bailey Chase from 2003 to 2005? The actor has continued his successful career since leaving behind his Oakdale gig and has appeared in such series as “Las Vegas,” “Watch Over me,” “Ugly Betty,” “Castle,” “Saving Grace” and “Damages” just to name a small few. Though he played Branch Connally on A&E’s canceled crime drama “Longmire,” fans can expect to see Chase back in primetime very soon. Deadline has learned that he’s landed a multi-episode arc to play DEA Agent David Lang on “Chicago P.D.” Listen closely when watching the NBC series, Wednesdays at 10:00 PM, as the character’s name will be mentioned leading up to his debut. As of yet, there is no specific air date to report.

See Robert Newman in Other Desert Cities.
“Guiding Light” fan favorite Robert Newman (ex-Josh Lewis; “Venice the Series'” Richard) will be taking part in the Cape May Stage Equity Theater Company’s “Other Desert Cities.” Directed by Roy Steinberg (former “Guiding Light” and “One Life to Live” director), the play surrounds one family’s differing political views and secrets. Look for Newman to appear as Lyman. Visit the Cape May Stage Equity Theater Company to purchase tickets today through the final performance on Friday October 31. Newman also appeared in the 2014 film “The Amazing Spider-Man 2” as a police captain and plays Ted Warner in the short feature “Deadline.”

Watch Brian Gaskill’s latest short film online.
Soap vet Brian Gaskill has had numerous daytime roles on “All My Children,” “As the World Turns,” “The Bold and the Beautiful,” “Guiding Light” and “Port Charles” and now has written and stars in another short film for his fans to enjoy. The actor reached out to Soaps.com about “The Audition,” which follows a man (Gaskill) and a woman (Leilani Wyatt, “Only in L.A.”) who attempt to rediscover their real joy by navigating their emotions. Watch the The Audition in full today. Please be aware that the film contains profanity.

Shelly Burch's cabaret.
Longtime fans of "One Life to Live" will remember actress/singer Shelly Burch for her 80s role as Llanview's Delilah Ralston Buchanan, one of Bo's (Robert S. Woods) wives. Though she's turned up in a few shows throughout the years, she excelled on Broadway in such productions as "Stop the World, I Want to get off" and "Annie." Now fans will be able to enjoy her in the cabaret "Incurably Romantic," alongside the David Shenton Trio, on Thursday October 30, Friday October 31 and Thursday December 4 at the Metropolitan Room at 34 West 22nd Street in New York City, NY. Produced and directed by her husband Martin Charnin, Burch will provide a collection of the best-loved songs in the American Song Book with a few surprises thrown in the mix. Visit the Metropolitan Room for tickets and showtimes.

Former daytimers join together in Stop Kiss.
Various soap alums will be coming together to take the stage in the Diana Son production "Stop Kiss," the story of Sara and Callie who are attacked while sharing their first kiss leaving Sara horribly injured. The cast includes Angela Lin ("As the World Turns'" ex-Wendy, "One Life to Live's" ex-nurse) as Callie, Amanda Carlin ("B&B's" ex-Dr. Sanders, "General Hospital: Night Shift's" ex-Mrs. Hopkins) as Mrs. Winsley/nurse, Sharon Leal ("Guiding Light's" ex-Dahlia Crede) as Sara, Jeff De Serrano ("Y&R's" ex-bailiff, "General Hospital's" ex-Serino) as Detective Cole, John Sloan ("Bones") as George and Brandon Scott ("Masters of Sex") as Peter. Of the play Director Seema Sueko shared, "'Stop Kiss' is a play that succeeds on the talent of the actors - their abilities to capture the nuance and comedy of a growing attraction, the complexity of the aftermath of a trauma, and the joy of discovering one's voice. We have, in this cast, deeply talented actors who have what it takes to bounce Diana Son's text through the roof. I'm honored to work with them." Performances will run from November 4 through 30 at The Pasadena Playhouse at 39 South El Molino Avenue in Pasadena, California. Visit The Pasadena Playhouse to reserve your seats today.

Lenny Platt returns to ABC.
"One Life to Live's" Lenny Platt, who played Llanview's Nate Saligner from 2008 to 2012, will be heading back to ABC. On Thursday October 9 Platt can be seen in the new legal drama "How to get Away With Murder." Platt will play Griffin O' Reilly in the episode titled "Smile or go to Jail," where his character, a star quarterback, is linked to the disappearance of a girl named Lila. Tune in at 10:00 PM. Over the last few years the actor has turned up in such primetime shows as "Law & Order: SVU," "Blue Bloods," "Chasing Life" and voiced the character of Gianni in the "Grand Theft Auto V" videogame.

Sam Hall passes away at 93.
Writer Sam Hall passed away on Friday September 26 at the age of 93 after coming down with pneumonia. Hall wrote for "Dark Shadows," "General Hospital," "One Life to Live" and "Santa Barbara." Spending ten years writing for "One Life's" Llanview, he contributed to the creation of the Buchanan family and was nominated for a Daytime Emmy in connection with the Karen Wolek (Judith Light) courtroom confession. Hall was preceded in death by his wife Grayson Hall, who played Euphemia Ralston on "One Life to Live," Marge Grey on "All My Children" and Dr. Julia Hoffman on "Dark Shadows." Visit Soaps.com's Official Facebook to view a photo of the actor and to leave your condolences.

Marian Seldes passes away at 86.
On Monday October 6 Timothy Seldes, brother of Tony Award winning actress Marian Seldes, alerted the public to her passing after an extended illness. "It is with deep sadness that I share the news that my dear sister Marian Seldes has died. She was an extraordinary woman whose great love of the theater, teaching and acting was surpassed only by her deep love for her family." The actress first appeared in daytime as Madame Ava on "Guiding Light," as Denise Nostrand on "Loving" and will also be remembered by longtime fans as "One Life to Live's" Sonya Cramer, Dorian Lord's mother. Her presence in Llanview always rocked Dorian to the core and gave viewers a glimpse into Dorian as a scared little girl, deeply afraid of mother, something the character rarely revealed. Seldes had numerous credits, including Broadway productions, in such series as "Studio One in Hollywood," "The Defenders" and "Cosby," to name a very small few, and most recently in 2011 on "Nurse Jackie." We send her daughter Katharine Claman Andres, grandsons Timo, Guthrie and Wells Andres and her friends our deepest condolences. She was 86. Feel free to leave your condolences and view a photo of the actress on Soaps.com's Official Facebook.

Justin Gocke passes away at 36.
Justin Gocke, best known for his daytime role as Brandon Capwell on "Santa Barbara" (1987 to 1990), died at the age of 36 back on September 8. Over the years, the actor appeared on "Simon & Simon," "The Burning Bed," "The Love Boat," "The A Team" and "Family Matters" to name a few. Soaps.com sends his family and friends, who celebrated his life on Saturday September 20 at the Pioneer Event Center in Lancaster, California, our deepest condolences. Donations are asked to be made to Grace Recourses or The International Bipolar Foundation.