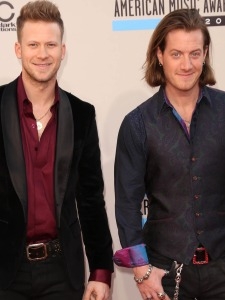 Soaps.com has a peek into a FOX crossover for the week of September 22, as well as fall premiere dates, a special awards show for country music lovers, an accident shuts down a TNT production, football greats in guest roles, episode teasers and more in our latest Primetime Dish column…

Arrow:
On Tuesday September 23 at 8:00 PM the CW will air a repeat of its May 14 episode titled “Unthinkable.”

Blue Bloods:
NFL legend Boomer Esiason (“The NFL Today”) will turn up as himself and visit Commissioner Frank Reagan (Tom Selleck) on October 3. The CBS series airs Fridays at 10:00 PM.

Boardwalk Empire:
In HBO’s Sunday September 28 9:00 PM episode titled “Cuanto,” Nucky and Margaret find common ground while facing a shared dilemma. Luciano meets with Capone in Chicago and encounters an old adversary. Sally Wheet makes a payment in Cuba, and Nucky recalls 1884 when he showed Eli the other side of life and took one more step up the Commodore’s ladder.

Cougar Town:
One of the show’s original cast members will be leaving Gulfhaven. TVLine has learned that Brian Van Holt, who plays Bobby ‘Penny Can’ Cobb, will make his way off canvas to pursue other projects in the beginning of season six – the final season of the TBS series. Stay tuned for the premiere sometime in 2015.

CSI: Cyber:
“90210” alum Luke Perry has been cast as a former FBI agent named Nick Dalton. TVLine has learned that the role could be recurring and Perry’s character will hold various secrets to Avery’s (Patricia Arquette) backstory and will work to become a futurist in the private sector. The CBS series will premiere during the 2014/2015 line-up.

Elementary:
Football analysis Phil Simms will appear as himself on November 13 as an associate of Sherlock’s (Jonny Lee Miller) who has a surprising, little-known talent. Tune in to CBS Thursdays at 10:00 PM.

Falling Skies:
Production for the TNT series was shut down on Tuesday September 16, due to an accident the previous day that killed a Vancouver Teamsters Local 155 security guard. Though the identity of the guard wasn’t made public at the time of the report, sources close to the set stated that the man was pinned against a tree after an unattended truck rolled down the hill in a Burnaby, BC park at 8:30 PM.

Family Guy:
Fans of the FOX series, as well as its sister series “The Simpsons,” are in for a treat. Look for the Griffin family to get lost and find themselves in Springfield – hometown of the Simpsons – in the season thirteen premiere episode. Tune in on Sunday September 28.

Grey’s Anatomy:
Season premiere, new time! Read our Grey’s Anatomy Spoilers to find out what Amelia uncovers in ABC’s Thursday September 25 8:00 PM premiere episode titled “I Must Have Lost it on the Wind.” Soaps.com will post the recap after the show airs.

Hannibal:
TVLine has learned that Gillian Anderson, who’s played Dr. Bedelia Du Maurier since 2013, will now appear as a series regular. The NBC thriller will return with season three sometime in 2015.

Hawaii Five-0:
NFL Hall of Fame inductee Eric Dickerson will appear as himself on October 31 when McGarrett (Alex O'Loughlin) spots the football great in a bait shop and asks him to take a selfie with him to make Danno (Scott Caan) jealous. The CBS series airs Fridays at 9:00 PM.

iHeartRadio Album Release Party With Maroon 5:
On Wednesday September 24 at 9:00 PM the CW will air a repeat of the August 26 one-hour special featuring performances and interviews with Adam Levine and his band to celebrate their new album "V."

Mom:
Season two of the CBS series will premiere on Monday September 29 at 8:30 PM.

Nashville:
Mykelti Williamson ("Touch," "Forrest Gump") has landed a four-episode arc to play an artist named Terry. Stay tuned for his air dates, as the new season premieres on Wednesday September 24 at 10:00 PM.

NCIS
Football analysis and NFL great Tony Gonzalez ("The NFL Today") will guest star as Special Agent Tony Francis. Look for his character to search for information on Special Agent Leroy Jethro Gibbs (Mark Harmon) on September 30 in the CBS series, which airs Tuesdays at 8:00 PM.

NCIS: Los Angeles:
CBS will bring it series back for a sixth season beginning on Monday September 29 at 10:00 PM.

Scandal:
Though details are being kept under wraps, Brian Benben ("Private Practice") appear in a guest-starring role sometime during season four, which premieres at 9:00 PM on Thursday September 25 on ABC.

Supernatural:
On Tuesday September 23 at 9:00 PM the CW will air a repeat of its May 20 episode titled "Do you Believe in Miracles?"

The Originals:
The CW will air a repeat of its May 13 episode titled "From a Cradle to a Grave" on Thursday September 25 at 9:00 PM.

The Vampire Diaries:
On Thursday September 25 at 8:00 PM the CW will air a repeat of its May 15 episode titled "Home."

The #VSFashionShow will air on December 9th on CBS. GET EXCITED NOW. pic.twitter.com/vxzWOlTGXY

Under the Dome:
In CBS' Monday September 22 10:00 PM episode titled "Go Now," as the walls begin to close in on those trapped within Chester's Mill a possible escape route reveals itself.

White Collar:
The sixth and final season of the USA Network series will premiere at 9:00 PM on Thursday November 6.

Witches of East End:
In Lifetime's Sunday September 21 9:00 PM episode titled "The Fall of the House of Beauchamp," Joanna and Wendy reconnect with a relative. The secrets of Dash's past begin to unfold, and Tarkoff's actions devastate Joanna.