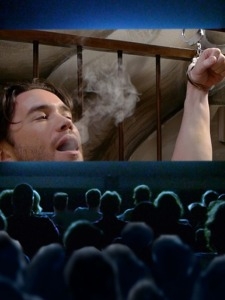 In this month’s column, Soaps.com has some details surrounding the careers of former soap stars of daytime canceled soaps “All My Children,” “As The World Turns,” “Guiding Light,” “Loving” and “One Life To Live.”

Read to learn about new primetime and film roles, soap icons team up on stage, a Masters Degree is earned, a new web series, a new home purchase, soap passings and more…

Lee Chamberlin passes away at 76.
Lee Chamberlin passed away on May 25 as a result of cancer at the age of 76. The actress began her daytime career on “Loving” as Pat in 1995 then went on to play Pat Baxter, Angie Hubbard’s mother, on and off on “All My Children” from 1983 to 1995. She also appeared on numerous primetime series including “All’s Fair,” “Paris,” “Diff’rent Strokes,” “Judging Amy” and “Touched By An Angel” to name a few. Soaps.com sends Chamberlin’s family and friends our deepest condolences.

Yaya DaCosta as Whitney Houston.
Yaya DaCosta, who played “All My Children’s” Cassandra Foster, has landed the role of Whitney Houston in Lifetime’s upcoming biopic of the singer, who died on February 11, 2012. TVLine has learned that Angela Bassett (“American Horror Story”) will direct the 2015 film, which will recount Houston’s rise to stardom, as well as her explosive relationship with fellow singer Bobby Brown.

On set shooting 'if Loving You is Wrong' with my talented on screen wife @mandaclayton. In our beautiful new Neighbourhood. #tylerperry

Walt Willey and Colleen Zenk join forces in Auntie Mame.
Two former soap stars will be teaming up on stage in the production of “Auntie Mame.” “All My Children’s” Walt Willey (ex-Jackson Montgomery) and “As The World Turns'” Colleen Zenk (ex-Barbara Ryan), along with Willey’s son Chance, can be seen at the Ottawa High School Auditorium at 211 East Main Street in Ottawa, Illinois from July 25 through 27. Look for Zenk as Vera Charles with Willey as Beauregard Burnside in the comedy surrounding a colorful, energetic woman, whose carefree life takes a turn when she’s left to raise her brother’s child, Patrick Dennis. Please visit Experience Ottawa to purchase tickets.

Martha Byrne’s new indie comedy.
Martha Byrne (“As The World Turns'” ex-Lily Snyder, “General Hospital’s” ex-Andrea Floyd) is teaming up with Daryn Strauss (writer/producer) and Frederick King Keller (producer/director) to produce and star in the new indie web series “Weight.” Byrne will play a mom named Claire, who surprises her family with her new skinny-self after returning home from a weight loss competition. Though she lost one-hundred pounds, Claire finds she’s gained some mental baggage in the form of various reactions from her family. Please visit the Weight Facebook page for future details to come following its summer production schedule.

Teen heartthrob Kerr Smith resurfaces on The Fosters:
Kerr Smith is remembered most for his role as Jack McPhee on “Dawson’s Creek” from 1998 to 2003. Prior to that he played Ryder Hughes on “As The World Turns” from 1996 to 1997 and can now be seen back in primetime. The actor has been cast as Robert Quinn, Callie’s (Maia Mitchell) biological father, on ABC Family’s “The Fosters.” Season two premiered on June 16 and continues to air new episodes Mondays at 9:00 PM.

Tom Pelphrey’s Tiger Lily Road screening.
By now fans of Tom Pelphrey (“Guiding Light’s” ex-Jonathan Randall, “As The World Turns'” ex-Mick Dante) should be aware of his new project Tiger Lily Road. This month will deliver one more screening of the film at 3:00 PM on Thursday June 26 at the Manhattan Film Festival at the Quad Cinemas at 34 West 13th Street #B in New York City, New York. Visit Screen Booker for tickets and keep an eye on Tiger Lily Road for future showings.

Ruby Dee passes away at 91.
Legendary actress Ruby Dee passed away at the age of 91 on Wednesday June 11 in New Rochelle, New York. Longtime soap opera fans will remember Dee from her role on “Guiding Light” as Martha Frazier in 1967 and on “Peyton Place” as Alma Miles from 1968 to 1969. The actress first broke into acting in 1946 with a role in “That Man Of Mine” and was last seen as Rose Brown in “1982” back in 2013. Soaps.com sends Dee’s family and friends our deepest condolences.

Nicole Forester in Dial A Prayer.
Daytime fans know her as "Guiding Light's" ex-Cassie Winslow (2005 to 2008), but actress Nicole Forester has moved on to films and primetime since leaving Springfield behind. In her latest project, "Dial A Prayer," Forester will appear as Marlene in the film surrounding Cora (Brittany Snow, "Ben And Kate"), a woman who works in a prayer request call center as per her community service sentence. Though she takes great pleasure in helping others, she becomes troubled when it's revealed a boy she believed to have helped save is hiding a secret from her. Keep an eye out for its release in 2015. William H. Macy also ("Shameless") stars.

Sherry Stringfield sneaks Under The Dome.
Sherry Stringfield got her acting start on "Guiding Light" playing Christina Blake from 1989 to 1991 and is probably best known for her fifteen year run as Dr. Susan Lewis on "ER." The actress is heading back to primetime and will appear in a recurring guest role on "Under The Dome." Keep an eye out for her when the CBS series returns with season two on Monday June 30 at 10:00 PM.

Paul Satterfield graduates with a Masters.
Back in June of 2012 we reported Paul Satterfield​ had gone back to college. The former "One Life To Live" actor who played Spencer Truman checked in with Soaps.com to let us know he's since graduated and stated, "I have successfully completed my Masters in Education Curriculum/Instruction Degree (M.Ed.) from Drury University and a Missouri State teaching certification English/language arts. I plan to teach and coach in the Fall." Pictured above with Satterfield are his children, Camron and Chloe, who the actor described as, "They were the driving force behind my studies." We wish Satterfield all the best and miss him immensely and the villain he played in daytime!

Nic Robuck celebrates first home purchase.
He played one of Llanview's most popular characters from the teen scene, but these days Nic Robuck (ex-James Ford) is putting down roots and taking one of the biggest adult steps one can take - buying a new home. To spare the actor a frenzy of fans on his doorstep by releasing further details, we'll just say… Soaps.com sends the actor the best of luck with his new investment!

Chris Beetem in Lullaby.
Chris Beetem may have left daytime behind back in 2007 when his "One Life To Live" character Tate Harmon went off to prison. These days the actor can be seen in the new film "Lullaby," which was released on June 13. Harmon will appear as Sean in the story that follows a man who hears from his estranged family that his father plans to take himself off of life support. Amy Adams ("Man Of Steel"), Garrett Hedlund ("TRON" franchise) and Richard Jenkins ("Jack Reacher") star.

John Brotherton heads to Guardians Of The Galaxy.
John Brotherton is not only involved in the latest upcoming "Fast And The Furious 7" film, he has also landed a small role in "Guardians Of The Galaxy." Keep an eye out for the former "One Life To Live" (ex-Jared Banks) actor as the Starblaster Pilot in the film that surrounds an American pilot in the center of a manhunt, in the far reaches of space, after stealing an orb - one that a super villain is also after. The official release date is August 1.