A few comments from our loyal readers:

Missing out! As The World Turns

From: Cliff W.: I was raised own ATWT since 1960. I've there through the good times and the bad (anybody remember that horrible Mr. Big story in the 80's?) It seems like the people who made this show have been put way back on the burner. I'd like to see stories directly involving Bob & Kim, Nancy, Lucinda, and please give Lisa something. Eileen Fulton is too talented to be ignored. I do enjoy the fact that Lilly and Holden get story lines. They have always been great characters. I'd also like to see more of Tom & Margo. By the way, I loved the tribute to Hal. He will surely be missed. Anyway, that's just one person's opinion. I'll keep watching.

From: Maryanne L.: I have been watching AMC since it started in 1970. You have to keep storylines for the older crowd to keep our interest. David Hayward's character was the best, I wish you would reconsider he is the best! Also, Julia Barr needed a storyline. Older people need love stories just as much as the older crowd

Do you have something to say about those characters that are "missing in action"? We invite you to leave a comment, or Contact Us!

Read more about how CBS' ATWT marked its 50th anniversary in April with a special episode featuring the seven most 'mature' actresses on the show! Here, on Media Village!

Also, we reported on the Anniversary in April. Feel free to read it ATWT Celebrates 50th Anniversary 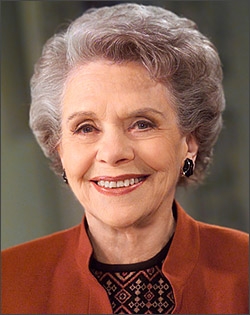 Helen Wagner (Nancy Hughes, As the World Turns) is one of the original cast members, who played on ATWT since its debut, April 2, 1956.

In Daniel Cooleridge’s new book, “The Q Guide to Soap Operas”, Daniel asks Helen about what it was like, acting on the show in the past. She was quoted as saying “It was very simple. Nancy was a homebody. I did everything around the house. I served coffee, fixed a meal, washed the dishes and all the things that a woman does during the day. We couldn’t move from set to set, so characters mostly came in and out of the kitchen. When we began to do the show on tape, we could make trips out elsewhere.” Gone are those days, and unfortunately, gone are those actors of ‘a certain age’, we find. Many fans have been appealing to the writers to “Please give the original cast members, or the elder cast members something to do!” Are their words all for naught?
These days, watching the elder characters in action is somewhat of a ‘treat’, and many of us wish to see them more often in storylines of their own – not just as supporting characters! We are happy to report that at the moment, some of the mature characters on the soaps do have storylines involving them.

After being put on the back-burner for so long, DOOL’shead writer, Hogan Sheffer has put Victor Kiriakis (John Aniston) back on canvas!

Victor Newman (Eric Braeden Y&R) had a huge storyline this past fall, with the involvement of a head injury that triggered epilepsy. It was an immense pleasure to see Braeden in action and we only hope this means that he won’t be put out to pasture again!

Alan Spaulding (Ron Raines GL) takes Lizzie (Marcy Faith Behrens Rylan) to court and fails at his attempt at gaining custody of little Sarah. Alan was always the devious paternal force in Springfield. A force to be reckoned with, that is! Always scheming, it’s always entertaining to see Alan at his best, er… worse! 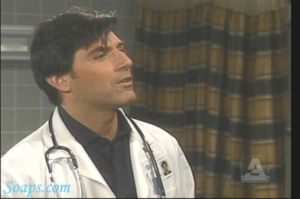 Soap Fans tell turn the tables: We Hate It!

Fans fight for their favorite couples! 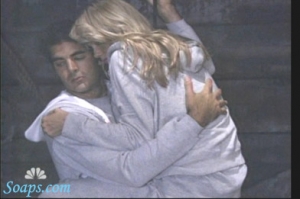