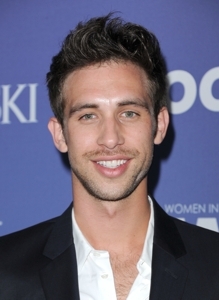 Daytime comings and goings in May featured lots of appearances, numerous exits, and more than a few actors swapping soaps. Get the details below:

The Bold And The Beautiful:
May was a busy month at “B&B” for appearances. “Lucky Dog’s” Brandon McMillan returned, along with L.A. Councilman Bernard Parks, Chapman University president James Doti, and Schae Harrison as Darla’s ghost. Princess Theodora was back this month as Bill’s assistant Alison, and various small roles in the Dubai storyline including Tom Lind as Bill’s pilot, Chacko Vadaketh as Muhammad, Jaylen Moore as Altair, and Ritu Lal as Malikah. Viewers also learned that “Neighbors'” Ashleigh Brewer had been cast as Ivy Forrester, and that the show is seeking to cast a new leading man in the 32 – 38 year age range, who is gorgeous and well-educated. Sean Kanan is set for his comeback as Deacon Sharpe in June. Read more about that through The Bold and the Beautiful Comings and Goings.

Days of our Lives:
Mark Collier, along with Alicia Willis as Deborah, last appeared in Salem the first week in May when Liam’s storyline wrapped up. James Scott finished taping as EJ on May 2, though he’ll be seen onscreen until the fall. Other exits included Blake Berris, whose character Nick died on May 12, and Ian Patrick Williams as Percy. This month brought small parts for Blake Bagby as a dealer, Mieko Hillman as Sally, Michael Rose as the hitman, Judilin Bosita as Nurse Carla, and Braeden Baade as Pete. Alison Sweeney finished taping as Sami on May 19, and Aaron and Griffin Kunitz, the twins who play Johnny, completed work on May 23, as these characters will also exit in the fall. Eileen Davidson was back taping as Kristen, and Kassie DePaiva is due to debut as Eve in June. Camila Banus is on her way out as Gabi. Get her last airdate in June through Days of our Lives Comings and Goings.

General Hospital:
Former "The Bold and the Beautiful's" Ridge, Ronn Moss, made an appearance in Port Charles in May with his band Player. Ex-"The Young and the Restless" actress, Michelle Stafford, debuted as Nina, and will be seen again June 3 when she'll be in scenes with Ilene Kristen's Delia. Also on the horizon for June is the return of Michael Saucedo as Juan, Jimmy Deshler as Rafe, and the debut of Hannah Nordberg in the role of Josslyn Jacks. Last but not least, one popular actress renewed her contract this month. Find out who signed on to stay through General Hospital Comings and Goings.

The Young And The Restless:
In May, Camryn Grimes was put on contract as Genoa City's Mariah, Helen Slater appeared as Dr. Chiverton, Michael Robinson of the NFL's Seattle Seahawks dropped in again as Victor's associate, and Elizabeth Hendrickson exited the canvas as Chloe on May 29. Also in May, viewers learned that former "Guiding Light" and "One Life To Live" actress, Gina Tognoni, had won the role of Phyllis, and that David Tom had been let go as Billy Abbott and replaced with "Army Wives'" Burgess Jenkins, who debuts June 24. Stephanie Lemelin was cast as Stitch's ex-wife Jenna, and will be seen June 13, while Randall L. Smith won the role of Moses Winters and will debut on June 12. Also coming in June is ex-"Guiding Light's" Terrell Tilford's new character, Barton, the surgeon who married Leslie. McKenna Grace was last seen as Faith on May 29 and handed the role back to Aly Lind due to movie commitments. Lind will first be seen on June 26. Finally, a former "All My Children" hunk was spotted at the "Y&R" studio. Find out who it was and why he was there through The Young and the Restless Comings and Goings.