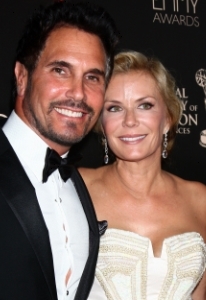 When secrets come out, so do the claws.

The Bold And The Beautiful:
When Ridge rains on Brooke’s parade with Bill, things go from bad to worse for everyone. She’s furious at him for destroying her day. Then she gets even more furious at Bill once Ridge shows her the incriminating photo of Spencer and Quinn. This leads to a brawl between the two men. However, it’s a horrible accident over the Gulf that causes the most damage. News soon reaches stateside and everyone starts blaming Quinn. When Liam badmouths her, Wyatt clobbers him, causing Hope to once again question which man she wants. Check out The Bold And The Beautiful Spoilers to find out why Deacon Sharpe pops up.

Days of our Lives:
It’s a fraught week in Salem as fights break out all over town. Eric tears into Nicole for betraying him and this leaves Jenn wondering if she really did the right thing. Meanwhile, Sami explodes at Jordan and Rafe has to stop them from coming to blows. And Theresa winds up front and center as John does his best to convince his son to dump her. This leads to Brady and his dad getting into a brutal fight. Read the Days of our Lives Spoilers to find out who else has a confession to make.

General Hospital:
As Nathan contemplates telling Silas the news about Nina, Sonny demands that Ava prove she’s really pregnant. News of this possibility shocks Morgan and Carly and things gets nasty. Across Port Charles, Mac and Levi have a heated argument while Rafe winds up in trouble. And Molly gets suspicious of Julian. Read Soaps.com’s General Hospital Spoilers to find out who Liz leans on for support.

The Young And The Restless:
Ian Ward continues to be the most frequently confronted man in Genoa City. This week, Avery has her turn, but will this really bring her any closer to who has been stalking her? Meanwhile, things continue to deteriorate between Colin and Jill, but they are getting steadily better between Summer and Austin. As she ponders taking their relationship to the next level, Cane shows Lily how much he cares by sending her on a scavenger hunt for her birthday. Visit The Young and The Restless Spoilers and find out what Nick thinks of Mariah.