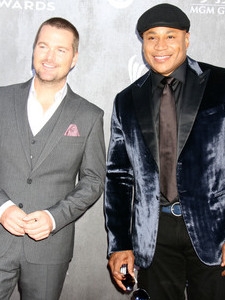 Soaps.com has various season finale scoops for the week of May 12, as well as a special salute to the troops event, interviews, renewals, cancellations, episode teasers, casting and more in our latest Primetime Dish column…

Interview! Soaps.com sat in during a conference call with the star of the show Kiefer Sutherland (Jack Bauer). When asked if the show’s special limited return proves to be successful would he agree to come back for a season two Sutherland replied, “I would never say no, because it’s just too easy for something to happen. But it is not something that I’m thinking about and it’s not something that I think Howard or anybody else is thinking about. I think once we realized we were going to do this and we actually started the process of obviously the writers with the scripts, Jon Cassar and myself doing our pre-production, we became so focused on trying to make these the best 12 episodes of 24, period, and we have four episodes left to do. I feel very, very strong about the first eight episodes that we have completed. Now, we just need to really bring it home. And then we’ll see where we’re at. I would never want to say, ‘No, I absolutely will not do that,’ because I don’t know.”

Arrow:
Season finale! A decision must be made in the CW’s Wednesday May 14 8:00 PM finale episode titled “Unthinkable.” Wednesday episode teasers: Slade makes plans to kill and kidnaps someone close to Oliver, who realizes he must stop the monster. Diggle and others take on Amanda Waller, and Thea goes to Roy for support.

Bones:
In FOX’s Monday May 12 8:00 PM episode titled “The Drama In The Queen,” the team investigates the secret past of a swim coach, who’s found dead in an abandoned well, and Jessica Weaver piques Sweets’ attention.

FOX Cancellations:
The network just announced that its canceling three of its freshman series: “Dads,” “Enlisted” and “Surviving Jack.”

Girl Meets World:
Disney has set the premiere date for its new spin-off to the 90s hit “Boy Meets World.” Tune in at 9:45 PM on Friday June 27 and watch the promo video below for what’s ahead.

Grey’s Anatomy:
Season finale! Read our Grey’s Anatomy Spoilers to find out what causes chaos to erupt at the hospital in ABC’s Thursday May 15 9:00 PM season finale episode titled “Fear (Of The Unknown).” Soaps.com will post the recap after the show airs.

Family Guy:
In FOX’s Sunday May 11 8:30 PM episode titled “He’s Bla-ack,” Cleveland Brown and Peter’s wives have a disagreement, which prevents them from hanging out.

Game Of Thrones:
In HBO’s Sunday May 11 11:00 PM episode titled “The Laws Of Gods And Men,” Stannis and Davos embark on a new strategy. Dany and some supplicants have a meeting, and Tyrion and his father face down in the throne room.

Hart Of Dixie:
Season finale! In the CW’s Friday May 16 9:00 PM finale episode titled “Second Chance,” Wade is forced to make a tough decision about his future with the Rammer Jammer and BlueBell following Zoe’s grand gesture. Don Todd, Lavon and George’s hero, helps them see things in their life more clearly. Grandma Bettie urges Lemon to get serious in finding a suitable husband, and AnnaBeth tries to picture her future with Davis.

Orphan Black:
In BBC's Saturday May 10 9:00 PM episode titled "Governed As It Were By Chance," Cosima helps Sarah dig into the origins of the clone experiment. During their hunt for answers, Sarah is at risk of losing more than she realizes.

Reign:
Season finale! In The CW's Thursday May 15 9:00 PM finale episode titled "Slaughter Of Innocence," Mary and Francis take action, as the King's madness and cruelty reaches a fevered pitch. An unforeseen terror in the woods could change lives forever, and a decision is made surrounding Lola's life-threatening labor.

Revenge:
Season finale! Read Soaps.com's Revenge Spoilers to hear how lives will be changed in ABC's Sunday May 11 season finale episode titled "Execution." As a reminder, we post recaps after each episode airs.

Star-Crossed:
Season finale! In the CW's May 12 8:00 PM finale episode titled "Passion Leads Them Power," Emery turns to an unexpected ally to help Roman, who is badly hurt. Grayson, Drake, Sophia and Lukas rush to find the stolen Suvek. Vega sets off the Suvek in the middle of a Marti Gras parade. Teri overhears Vega ordering the death of her friends, and Gloria shares a secret.

Supernatural:
The reaper returns in the CW's May 13 9:00 PM episode titled "Stairway To Heaven." Tuesday episode teasers: Castiel calls Sam and Dean for help following an attack on the angels. Sam worries about the cost to Dean whenever he uses the Blade, and the Reaper is at the heart of the attack. Watch the special scene preview below.

The 100:
Mass chaos occurs in the CW's May 14 9:00 PM episode titled "Unity Day." Wednesday episode teasers: Bellamy, Jasper and Raven show up ready for battle, which causes all hell to break loose. Octavia and Lincoln grow closer, and tragedy strikes on the Ark.

The Haves And The Have Nots:
Season two will premiere at 9:00 PM on Tuesday May 27 on OWN.

The Originals:
Season finale! A mother and child are in danger in the CW's Tuesday May 13 8:00 PM finale episode titled "From A Cradle To A Grave." Read The Originals Spoilers to find out who is on the hunt for Hayley, who joins forces to take down Klaus and more!

The Simpsons:
Interview! Soaps.com sat in during a conference call with Co-Executive Producer Matt Selman. When asked if the show ever considered to have someone other than Homer as POV for FOX's special LEGO episode, which aired on May 4, Selman replied, "I think no; I think it was pretty much always Homer from the beginning. I mean we really locked in early, like I remember me and Brian pitching the story to Al and Jim Brooks and we said, 'It can't just be, there has to be like,' and like this is coming from them, like the direction that they're always giving us, and it's like, 'there has to be strong, relatable, real family emotion at the heart of it, or it's just going to be a bunch of craziness.' Right. And the area of like parents and how the interact with their children and children aging and playing with children is so part of our daily lives we really thought we're like we're the Homers of our own life now with our kids. We're 42, you know, so it’s like we really kind of wrote it from the perspective of the dad watching his kids grow up." Tune in Sundays at 8:00 PM.

The Vampire Diaries:
Season finale! On Thursday May 15 at 8:00 PM the CW will air its finale episode titled "Home." Read The Vampire Diaries Spoilers to find out why Damon is forced to hold himself together, what horrifies Sheriff Forbes and more!