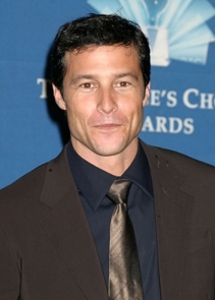 Daytime casting moves in April featured some actors finishing up stints, some crossovers and guest-star appearances, recasts, and more. Get the details below:

The Bold And The Beautiful:
April brought the return of two familiar faces when Schae Harrison began popping up as Darla’s ghost on April 7 and Hunter Tylo came back as Taylor on April 25. There was no word on any of the previous casting calls issued, but the month featured two game show related guest appearances when Jonathan Mangum from “Let’s Make A Deal” appeared on April 23 and “The Price Is Right” icon, Bob Barker, did a cameo on April 30 as part of the animal rights storyline. Cameos announced for May included L.A. councilman Bernard Parks, and this “Lucky Dog” host who previously appeared as himself on the show. Get his name through The Bold and the Beautiful Comings and Goings.

Days of our Lives:
Passing through Salem on April 1 was Blake Adams as Carmel, Sami’s former boyfriend. Also in April, Tommy Day Carey played a reporter, Charles Howerton appeared as Mr. Howell and former “General Hospital” star, Alicia Leigh Willis did a multi-episode stint as Debra. Jade Harlow tweeted that she wouldn’t be seen as often as Sheryl after her storyline reveal happens, and a casting call went out for a gorgeous thirty-something African-American actress to play Shauna. Mark Collier wraps up his run as Liam on May 1, and the role of Ben has been recast. Get details through Days of our Lives Comings and Goings.

General Hospital:
This month brought the return of Wally Kurth as Ned to Port Charles on April 15 and the debut of Zachary Garred as Levi. Also, Kristen Storms came back to her role of Maxie and Bruno Amato appeared as a gun dealer. A casting call went out for a Hispanic actress in the 27 - 33 year age range to play a woman pursuing a medical career in town. The possible contract role begins taping in May. Find out which "GH" actress' off-screen husband will reprise his former role in June through General Hospital Comings and Goings.

The Young And The Restless:
April brought the departure of Cynthia Watros, who was replaced as Kelly in Genoa City by Cady McClain on April 16. The month had several special appearances including, Jacob Young and Linsey Godfrey as their "B&B" characters Rick and Caroline, Jill Larsen as Connie, Mo Rocca as Milton the accountant, and "Let's Make A Deal's" Danielle Demski as a businesswoman. Also appearing were D.C. Douglas as Colin's associate, Chris Elwood as Marcus, "Parenthood's" Matthew Atkinson as Austin, and Andrea Grano as Dr. Sternin. Eileen Davidson and Beth Maitland popped in as Ashley and Traci on April 19 as well. It was announced that Helen Slater would appear in May as Dr. Chiverton, and Seattle Seahawks' Michael Robinson would return again to do business with Victor. A new casting call went out for the role of Leslie's husband Barton, an African-American surgeon, and actress Elizabeth Hendrickson made known her plan to exit as Chloe. Find out when she'll last be seen through The Young and the Restless Comings and Goings.