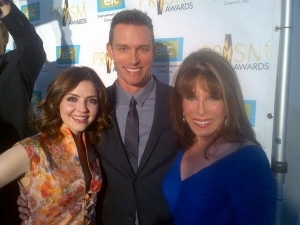 Check out Soaps.com’s regularly updated soap opera news rooms for everything you need to know about what the actors from “The Bold and the Beautiful,” “Days of our Lives,” “General Hospital,” and “The Young and the Restless” have been up to all week long!

The Bold And The Beautiful:
An iconic game show host is set to appear on “B&B.” And it was back in the early 2000s when young Hope Logan almost died by drowning in a hot tub. Do you remember what happened that put her in that position? Vote about it in our Thursday Throwback Poll. Then read Candace’s weekly blog, “B&B” Breakdown, for her thoughts about Hope’s return to a relationship triangle in Soaps.com’s The Bold And The Beautiful News Room.

Days of our Lives:
A “Days” star was injured off set. The show was honored for its storyline treatment of a sensitive subject. And go back to 1993 in Salem for our Throwback Thursday Poll when Sami Brady saw Marlena cheat on Roman with John. A pregnancy followed and Sami schemed to find out the paternity results. Do you remember what she did with the truth? Vote now. And see if you agree with Christine’s thoughts about the Ejami fantasy episode in her weekly blog, Deconstructing “DOOL,” all in Soaps.com’s Days of our Lives News Room.

General Hospital:
An actor who was once a “GH” staple appeared in a primetime music special. Who is the cockiest resident in Port Charles? Vote about that and our Throwback Thursday Poll regarding the time back in 1979 when Luke Spencer raped Laura Webber, which resulted in an unlikely love match. Luke tried to deny his love for Laura and planned to wed another. Do you remember who she was? And check out the weekly “GH” rundown to see if you agree with Vi that AJ’s service was the stuff of soapy goodness, all in the General Hospital News Room.

The Young And The Restless:
An actress announced her last day in Genoa City, and another is set to appear in an upcoming film. And go back to 1991 when David Kimble faked his own death and pretended to be Jim Adams. Do you remember who he really wanted to look like? Vote about it in our Throwback Thursday Poll, and participate in another poll about Stitch’s love choices. Then read Candace’s weekly Restless Rant to see if you agree with her about how boring Avery’s cooking show storyline is, all in The Young And The Restless News Room.