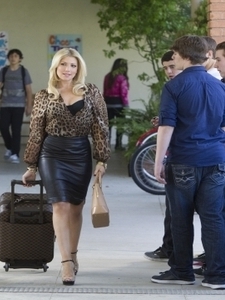 Soaps.com has a new CBS series for the week of April 21, as well as episode teasers, casting, a fan contest, a country singer guests on wife’s sitcom and more in our latest Primetime Dish column…

Arrow:
Things spin out of control in the CW’s April 23 8:00 PM episode titled “Seeing Red.” Wednesday episode teasers: Roy unleashes on the city after the mirakuru sends him into an uncontrollable rage. Oliver must figure out a way to stop the mirakuru, who’s taken over Roy completely. Sara suggests killing Roy, but Thea has a plan to break through to him and goes on camera at Moira’s campaign rally to lure him to Verdant.

Bad Teacher:
The new CBS series based off of the 2011 feature film premieres on Thursday April 24 at 9:30 PM. Former trophy wife Meredith Davis (Ari Graynor) sets out to regain a life of luxury by posing as a teacher at an upscale school. Though she plans to meet and marry one of the students’ rich, single fathers, her unconventional and unsuitable methods of teaching cause suspicion with a fellow faculty member.

Banshee:
TVLine is reporting that Geno Segers and Afton Williamson, who play Chayton Littlestone and Alison Medding, have been promoted to series regulars for the upcoming season three. The Cinemax series will return sometime in 2015.

Had a great day shooting with @MsNazContractor ! Please welcome her to #CovertAffairs

Dallas:
Keep an eye on Soaps.com’s Dallas Spoilers for details on when the TNT series will return from its mid-season break.

Defiance:
Linda Hamilton (“Chuck,” “Terminator” films) will recur in the guest-starring role as Rafe McCawley’s (Graham Greene) wife Pilar McCawley during season two of the Syfy series. Tune in at 8:00 PM on Thursday June 19 for the series premiere.

Extant:
Tessa Ferrer (“Grey’s Anatomy”) will recur in the role of an astronaut named Katie Sparks when the CBS series premieres at 9:00 PM on Wednesday July 9.

Game Of Thrones:
In HBO’s Sunday April 20 11:00 PM episode titled “Breaker Of Chains,” Tyrion doesn’t know if his family will help him out of his current mess and receives a visit from someone loyal. Tywin offers his services to the common good. The personnel at Castle Black is assessed by Sam. Arya receives another life lesson from the Hound, and Daenerys comes to a decision.

Gang Related:
Fan votes! If you’re anticipating the new upcoming FOX series and would like to see an advanced screening before its Thursday May 22 premiere, Soaps.com has a contest for you. Eventful and the network will grant fans in five cities the chance to screen its new action drama starring Ramon Rodriguez (“Battle Los Angeles,” “The Wire”), RZA (“G.I. Joe: Retaliation,” “Californication”) and Terry O’Quinn (“Lost”). Cast your vote to Demand it!® Gang Related now through Monday April 21 at 5:00 PM Pacific.

Grey’s Anatomy:
Read our Grey’s Anatomy Spoilers to find out who gives the doctors upsetting news in ABC’s Thursday April 24 9:00 PM episode titled “Change Of Heart.” Soaps.com will post the recap after the show airs.

Hart Of Dixie:
It’s all about being stuck in the middle in the CW’s April 25 9:00 PM episode titled “Better Man.” Friday episode teasers: Zoe is put in an awkward position, smack-dab between Wade and Vivian. Things between Lavon and AnnaBeth worsen and begin to affect the town. Lemon devises a plan to get a less-than-perfect health inspection grade changed, and George agrees to go on a date with a Bible School teacher.

Orphan Black:
Season premiere! In BBC’s Saturday April 19 9:00 PM premiere titled, “Nature Under Constraint And Vexed,” Alison sinks into despair after attending Aynsley’s funeral. Sarah suspects that ruthless pro-clone Rachel is behind her daughter’s disappearance and goes on the hunt to find her.

Pretty Little Liars:
Read Soaps.com's Pretty Little Liars Spoilers to find out what the girls are faced with dealing when the ABC Family series resumes season five on Tuesday June 10 in the episode titled "EscApe From New York."

Reign:
In The CW's Thursday April 24 9:00 PM episode titled "Toy Soldiers," Mary and Francis are torn between putting their own countries first or saving their marriage after her uncle arrives with news about her mother. King Henry hatches an elaborate plan surrounding the English throne that will end in disaster, and Bash and Kenna start to trust one another.

Revenge:
Though the show will not be seen on Sunday April 20, read Soaps.com's Revenge Spoilers to hear who Emily must go up against in ABC's Sunday April 27 episode titled "Revolution." As a reminder, we post recaps after each episode airs.

Star-Crossed:
Many are affected by a hurricane in the CW's April 21 8:00 PM episode titled "What Storm Is This That Blows So." Monday episode teasers: Everyone is trapped inside the school after a hurricane hits the town. Roman becomes very paranoid and angry after being drugged by Teri. Emery is hurt by what Roman says during his drugged state. Grayson blackmails Drake into breaking up with Taylor, and Julia asks Emery for help with Eva's threats.

Supernatural:
In the CW's April 22 9:00 PM episode titled "Alex Annie Alexis Ann," Sam and Dean are called in after Sheriff Mills kills a vampire who attacked a prisoner named Annie, used as bait to lure in humans to feed on. However, Sheriff Mills finds out the hard way that family always comes first while trying to rescue Annie.

The 100:
In the CW's Wednesday April 23 9:00 PM episode titled "His Sister's Keeper," Bellamy and his crew search for Octavia in Grounder territory. Raven notices the deep connection between Finn and Clarke, and Bellamy and Octavia's childhood on the Ark is revealed through flashbacks.

The Americans:
FX has green-lighted its critically acclaimed series for a third season, which will consist of thirteen episodes. Tune in Wednesdays at 10:00 PM.

The Originals:
Someone reaches their breaking point in the CW's Tuesday April 22 8:00 PM episode titled "An Unblinking Death." Read The Originals Spoilers to find out what happens when Cami tries to help Kieran, what Elijah witnesses and more!

The Tomorrow People:
A big powerplay takes place in the CW's April 21 9:00 PM episode titled "A Sort Of Homecoming." Monday episode teasers: Everyone is concerned about the consequences if The Founder were to find out about Roger's return. Stephen needs John and Cara's help to destroy the machine The Founder has been using him to train in. Russell and other Tomorrow People lose hope and make plans to head out on their own.

The Vampire Diaries:
The show flashes back to 1960s Mystic Falls in the CW's Thursday April 24 8:00 PM episode titled "Man On Fire." View The Vampire Diaries Spoilers to find out what Damon causes Enzo to do, what Tyler witnesses and more!

Two And A Half Men:
TV Guide is reporting that country superstar Brad Paisley will join his wife Kimberly Williams-Paisley, who plays Gretchen, for a guest stint during the CBS series' season finale on Thursday May 8 at 9:00 PM. As of yet, details for his role are being kept under-wraps.