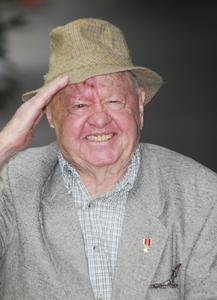 Soaps.com has a trailer for the final season of a popular HBO series for the week of April 14, as well as episode teasers, casting, Bates Motel remains open, a directorial debut, renewals, goodbye to a legend and more in our latest Primetime Dish column…

A legend passes on…
Acting legend Mickey Rooney passed away at the age of 93 on Sunday April 6. Rooney’s film career began in 1926 and he went on to star and appear in numerous shows throughout the years such as “The Hardy Boys,” “Walt Disney’s Wonderful World Of Color” and “The New Adventures Of The Black Stallion,” to name a small few. Most recently, the actor was working on projects titled “Fragments From Olympus: The Vision Of Nikola Tesla,” “Dr. Jekyll And Mr. Hyde” and was rumored to have been involved in the production of “Old Soldiers.” Soaps.com sends Rooney’s family and friends our deepest condolences.

Arrow:
In the CW’s Wednesday April 16 8:00 PM episode titled “Man Under The Hood,” Slade is found in the lair waiting for Oliver, Canary, Diggle and Felicity. A member of Team Arrow is sent to the hospital as a result of an epic battle. Oliver is forced to pick between his battle with Slade or his family, and a new secret troubles Laurel.

Bates Motel:
Renewed! A&E has picked up ten more episodes of its hit series for season three, which will begin filming this fall. Tune in Mondays at 10:00 PM for the remainder of season two.

Game Of Thrones:
Renewed! HBO has renewed its fantasy series for not one, but two more seasons. President of HBO Programming Michael Lombardo announced the plans for seasons five and six and stated, “‘Games Of Thrones’ is a phenomenon like no other. David Benioff and D.B. Weiss, along with their talented collaborators, continue to surpass themselves, and we look forward to more of their dazzling storytelling.” Tune in Sundays at 9:00 PM.

Girl Meets World:
Disney has released the first photo (below) of the upcoming spin-off to the 1990s sitcom “Boy Meets World.” Stay tuned for the series’ 2014 premiere date.

Grey’s Anatomy:
Read our Grey’s Anatomy Spoilers to learn how Meredith helps Cristina in ABC’s Thursday April 17 9:00 PM episode titled “Go It Alone.” As a reminder, we will post the recap after the episode airs.

Hart Of Dixie:
In the CW’s Friday April 18 9:00 PM episode titled “Back In The Saddle Again,” Zoe and Lemon turn to each other for advice. Wade becomes suspicious of Vivian’s ex-husband’s true intentions. Lavon loses focus on the opportunity to bid to have the County Fair in BlueBell when he learns AnnaBeth is dating, and Magnolia wants to throw a party and concocts a plan to get Brick away from his house to do so.

Reign:
In The CW's Thursday April 17 9:00 PM episode titled "No Exit," Mary's brother James arrives and convinces her to return to Scotland. Francis uncovers a plot that would destroy Mary and causes a rift between them. Catherine and Kenna take drastic measures, considering Penelope is still in charge, and Lola becomes suspicious of Lord Julien's marriage proposal.

Revenge:
Read Soaps.com's Revenge Spoilers to hear what tactic Emily uses to get what she wants this time in ABC's Sunday April 13 episode titled "Addiction." We will post the recap following the episode.

Rizzoli & Isles:
TVLine is reporting that Enver Gjokaj ("Witches Of East End") will guest star in three episodes of the TNT series as a Boston professor named Jack Keystone. Stay tuned for his appearance during season five, which premieres at 9:00 PM on Tuesday June 17.

Star-Crossed:
Suspicions are confronted in the CW's April 14 8:00 PM episode titled "Some Consequences Yet Hanging In The Stars." Monday episode teasers: Roman and Emery argue about whether or not Castor can be trusted. When questioned, the way Castor reacts isn't what Roman expected. Grayson tries to put the pieces together surrounding the night he blacked out. Taylor wants to spend more time with Drake and throws a 'meteor shower' party, and Teri's latest decision puts her in grave danger.

Supernatural:
A deal is offered in the CW's April 15 9:00 PM episode titled "Meta Fiction." Tuesday episode teasers: Metatron enlists Castiel to team up with him. When Castiel refuses, a surprising plan is set in motion, and Gadreel is captured by Dean and Sam.

The 100:
It's all about the last resort in the CW's April 15 9:00 PM episode titled "Twilight's Last Gleaming." Wednesday episode teasers: Clarke and Finn's romance is threatened. A Grounder watches Octavia, who suffers a blow to the head. Kane's plan to reduce the population of the Ark is exposed by Abby, and she and Jaha realize some of The 100 are still alive on Earth.

The Originals:
The feat of the blessings is celebrated in the CW's Tuesday April 15 8:00 PM episode titled "The Big Uneasy." Read The Originals Spoilers to find out what Elijah accuses Klaus of this time, the latest details on Marcel's new plan and more!

The Tomorrow People:
It's all about being reunited in the CW's April 14 9:00 PM episode titled "Modus Vivendi." Monday episode teasers: A potential truce between The Tomorrow People and Ultra nears, due to Stephen's hard work as a double agent. Russell is sent to meet with The Founder. Jedikiah is desperate to keep his secret hidden from Ultra, and Hillary tries to help Stephen contact his dad.

True Blood:
The HBO series returns with ten new episodes for its seventh and final season on Sunday June 15 at 10:00 PM. Watch the trailer below and take special note of the names on the gravestones…