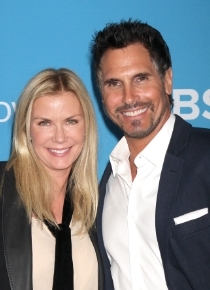 Blackmailed and bowled over.

Things get awkward, uncomfortable and even tense.

The Bold And The Beautiful:
Bill and Brooke reunite after the beard woos her with his amazing words. But he may have to learn how to use his wits in a whole new way. Quinn agrees to keep their affair a secret, but there are a few things he’ll have to give for her silence. Meanwhile, Hope is thrown off guard when Liam kisses her. She then throws Wyatt off balance by making a big announcement. Check out The Bold And The Beautiful Spoilers to find out what Liam finds falling out of Hope’s purse.

Days of our Lives:
EJ realizes that someone knows about his affair with Abigail. He’s not the only person in Salem facing a threat though. Sheryl has it out for Kate while Marlena remains paranoid about Nicole. And Liam’s plan to destroy Daniel’s career looks like it could actually work. Read the Days of our Lives Spoilers to find out who is feeling jealous about JJ.

General Hospital:
While everyone chases after Obrecht and Ben, something shocking happens to the doctor. Meanwhile, Liz finds herself stuck between Nikolas and Ric as the three of them try to deal with their feelings. And Nathan manages to bond with Britt while keeping his shirt on. Read Soaps.com’s General Hospital Spoilers to find out which Port Charles resident Spencer knows a secret about.

The Young And The Restless:
Victoria and Billy are forced to question what kind of future they have together. However, it’s the present that seems more pressing for Jill and Colin when they give in to their desires. Meanwhile, Nick and Sharon manage to find some quiet time together while Jack does his best to do right by Kelly. Visit The Young and The Restless Spoilers and find out who Devon has an awkward time with in Genoa City.