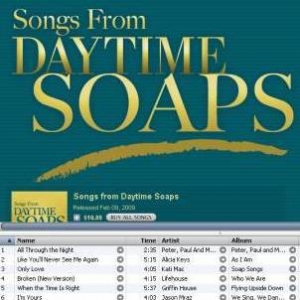 For those of you who spend a lot of time surfing the iTunes Store looking for the latest hot hit, Soaps.com has a little recommendation for you!

The popular site has now released a special collaboration titled “Songs From Daytime Soaps,” which contains many recent songs played on All My Children, As The World Turns, The Bold and the Beautiful, General Hospital, Guiding Light, and One Life to Live!

The complete list, consisting of eleven songs, can be purchased for $10.89 or individually for $.99 and goes as follows…

All My Children:
“All Through the Night” was featured on the October episode when Kendall was in a coma.
“Like You’ll Never See Me Again” played when Angie spotted Jesse at the train station.
“Stop This World” was played by Ne-Yo at Angie and Jesse’s wedding.

As The World Turns:
“Finish What You Started” was played when Alison was flirting with Chris at Yo’s.
“I’m Yours” played while Emily and Casey were in New York City.

The Bold and the Beautiful:
“You Are So Beautiful” was played before Storm committed suicide.

One Life to Live
“When the Time is Right” played while Talia and Antonio made love.
“Finally” was Rex and Adriana’s wedding song.

Stop on over to iTunes to check them out today!

Soaps.com is happy that our readers will finally have a chance to obtain some of the songs of the soaps!